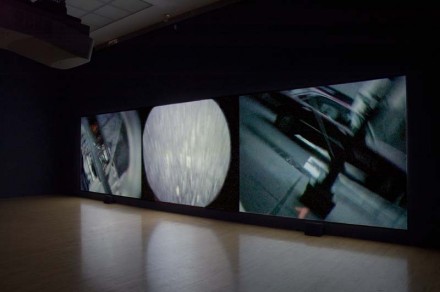 A retrospective of early works by artist and filmmaker Steve McQueen is currently on view at the MoCA’s Hollywood location at the Pacific Design Center, through September 21.  McQueen has carved out a unique place for himself as both a practicing video artist and filmmaker (with both a Turner Prize and an Oscar to his name) over the past years, and his exhibition at MoCA’s Pacific Design Center offers an introduction to the artist’s early practice. 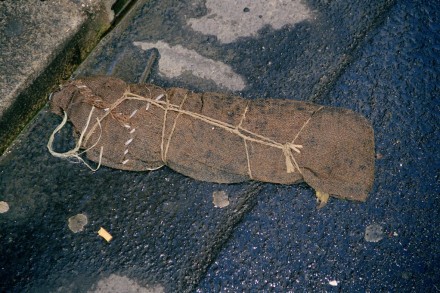 The Drumroll show, programmed by Bennet Simpson, makes intriguing use of the Pacific Design Center’s occasionally bizarre, geometric layout.  The two level white-cube demands any exhibition to be split, and, since its inception in 2001, installations often follow this recipe. Interestingly enough, it is work that relies on its own geometry, such as Jean Prouvé’s “Three Nomadic Structures (2004) and Jacob Hashimoto’s Gas Giant in (2014) which seem best suited for the venue.   On entering the space, the viewer is presented with a excerpted selection of photographs from the Barrage series (1988). Drainage barriers – oblong forms of burlap, faded fabric and collected debris – litter the New York gutters and sidewalks, suggesting an eerily lifelesness in a terrain devoid of humans, save basic urban infrastructures. With only twelve images out of the original fifty-six, each roughly about 15 by 20 inches, the tone of the masses shifts dramatically. Instead of a barrage of more or less the same image, the viewer is able to detect the subtleties in each unassuming gesture presented.

Installed on the upper level of the cube, the show’s titular Drumroll is not actually audible until the viewer crosses into the nearby space, where it suddenly consumes the viewer in the quite literally rolling landscape of its three-channel projection.  Drumroll remains significant for its simple self-reflexivity: the apparatus does not control its subject, the apparatus distorts and becomes the subject. Fashioned from a cylindrical oil drum with three holes drilled into the top, bottom and center, the triptych follows each camera’s movement within the object. The center projection is the center of the oil-drum, allowing the glimpses of McQueen as he goes about his task. 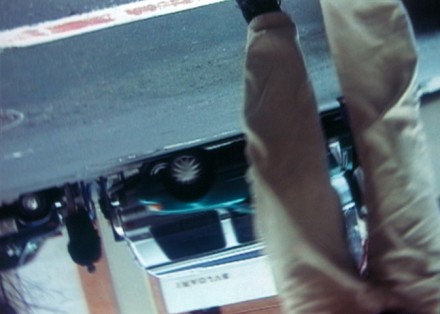 The whirling triptych lasts only twenty-five minutes, but it seems to continue indefinitely. The soundscape of the work – the din of traffic and the pulsated scraping of barrel and shoe against concrete becomes rhythmically hypnotic, even if the three rolling images becomes disorientating after an extended viewing.  This is an act of performed observation, with McQueen’s hurried apologies to other pedestrians can be heard throughout the work. At the same time, the viewer does not see what McQueen’s experiences, and the installation ultimately forces the viewer to visually embody the action of the oil-drum. 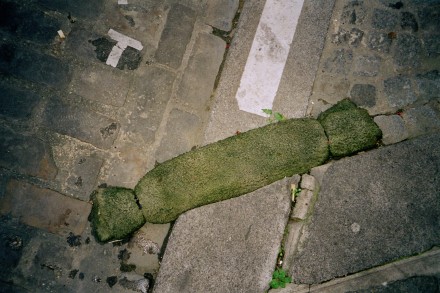 McQueen’s transition from video art to cinema seems a backwards route, historically. Yet there is much to be said of McQueen’s narrative film work that stills speaks to this tradition. His use of durational, lingering moments of examination in more cinematic works such as Hunger (2008) or the Academy Award winner for Best Picture, Twelve Years a Slave (2013), suggest a studied, keen understanding of how best to integrate each form’s virtues into a work.

This entry was posted on Tuesday, August 12th, 2014 at 12:00 am and is filed under Art News. You can follow any responses to this entry through the RSS 2.0 feed. You can leave a response, or trackback from your own site.