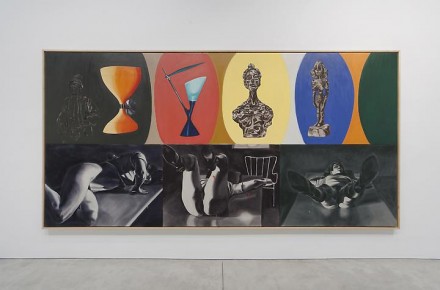 David Salle, Fooling with Your Hair (1985), via Skarstedt

The Skarstedt Gallery continues its series of summer group exhibitions in Chelsea this month, presenting another series of works by artists sharing common interests in production, appropriation and the potential for painting after the advent of widely distributed photographic technologies.  The exhibition, featuring work by Martin Kippenberger, George Condo, Richard Prince, David Salle and Albert Oehlen, is spread across the two rooms of the Skarstedt space on 21st Street, offering ample space to pass back and forth between the monumental canvases, and examine the various artist’s techniques and formal interests. 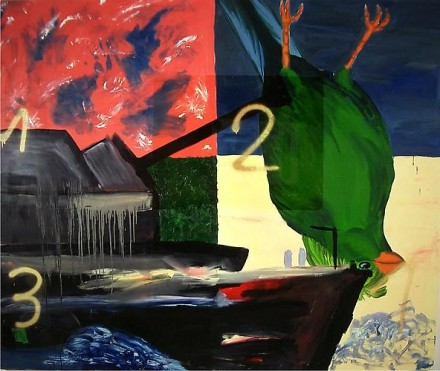 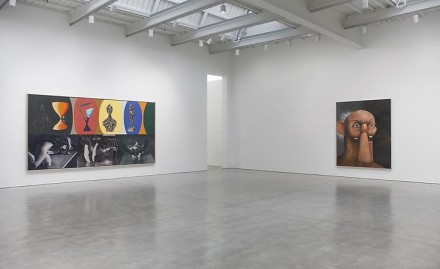 The five works on view vacillate between stark, minimal compositions (a la Prince’s considerably sized joke painting, on view here), and the hyper-loaded surfaces created in works by Salle and Kippenberger.  Throughout, reproductions and elements of contemporary life are strewn alongside harsh strokes and peculiar affectations that force the viewer into a frenzied attempt at following the artist’s line of thought, as well as their actual painterly lines on the canvas.  In others, like George Condo’s Old Man Portrait, the work’s frenetic energy sits just off the painted surface, reflected through his subject’s sneering glare.  Even Prince’s work, in all its subtle, lightly spattered minimalism, carries a harsh undercurrent of sexual frustration and domestic strife, underscored by the work’s inflections of confusion and excess text. 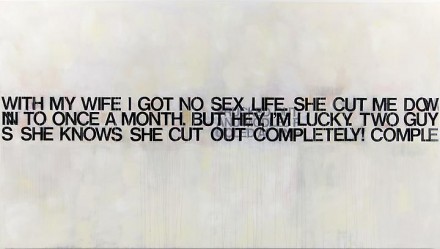 The press release calls the show an exhibition exploring intersections of translation and narrative, but ultimately, the pieces on view serve as a fitting examination of intensities, of violent forces and harsh flows of movement that render works not altogether pleasing to view, but ultimately full of embedded meanings, coded interpretations and occasionally disturbing conclusions.  Ohelen’s Grazie, for example, is loaded with a disturbing force, caused in part by the forced imbalance of the figure in the corner of the frame.  Performing some sort of vaguely evocative action, one finds themselves re-examining the work several times over, seeking a point to anchor the eye on, and expand outward, but the point of recognition never fully comes.  Oehlen makes sure to give no help from the muddy palette behind his figure either. 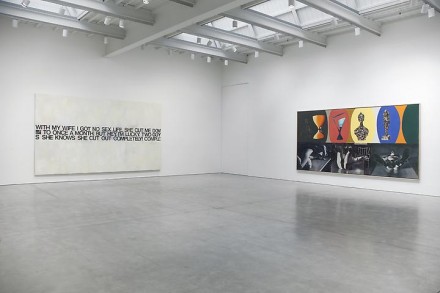 Feelings of alienation and exterior spaces abound in these works, and the works do a remarkable job of calling forth external reference points, whether through direct visual inclusion or a simple gaze out into negative space.  In any one of the works, however, a tangible sense of power radiates from the surface of the work, making the minimal selection of artworks for the exhibition understandably potent.

The summer exhibition is on view through the end of August. 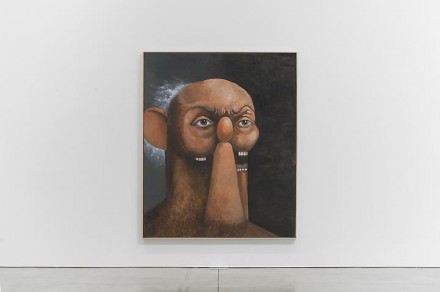 This entry was posted on Sunday, August 31st, 2014 at 12:17 pm and is filed under Art News. You can follow any responses to this entry through the RSS 2.0 feed. You can leave a response, or trackback from your own site.