New York – “Here and Elsewhere” at the New Museum Through September 28th, 2014 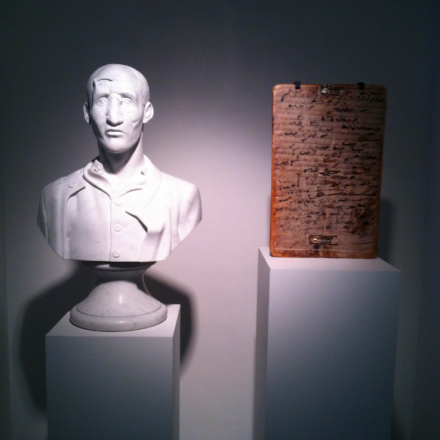 In light of its subject matter, the New Museum wastes no time in describing the challenges ahead of Here and Elsewhere, its current exhibition focusing on contemporary Arabic and Middle Eastern art.  Taking its title from the 1976 Jean-Luc Godard documentary of the same name, the museum effectively poses the same questions that plagued Godard’s quasi-documentary on the Palestinian army.  Faced with an inability to complete his statement on the complex social issues and the subsequent defeat of Palestine in the Six Days War, Godard instead sought a middle ground between the embattled nation and his French homeland.  The film is spiked with cinema verité segments, abstract performance and experimental camerawork that ultimately places a considerable distance between the film and any sense of cohesive, authoritative statement. 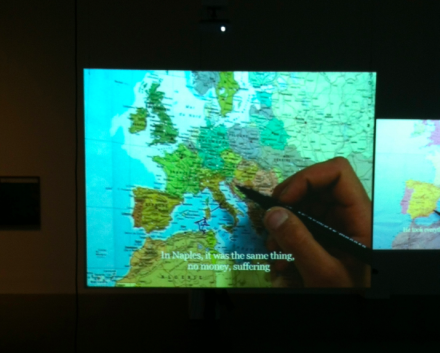 It’s this same problem of statement that the New Museum bravely stares down in its exhibition, facing an expansive and complexly interlinked series of artistic communities in Egypt, Lebanon, Palestine and Syria, among other nations, while contending with the act of depiction and representation.  The exhibition, by its nature and its namesake, seems intent on avoiding the same inclination towards externalizing the space of Arabic artists.  Rather than turn their work into a space relatable only through the myopic Western framework, the exhibition prioritizes space and identity, history and relation as methods to understand the networks and influences of artists operating throughout the Middle East. 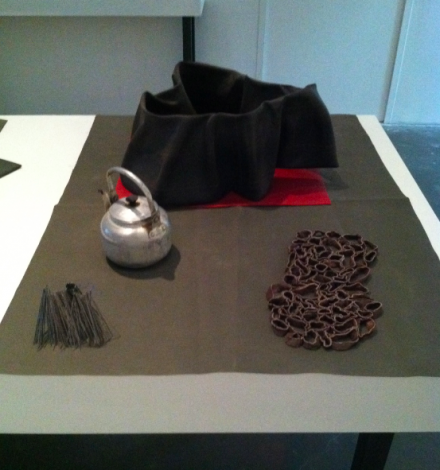 Accordingly, the work on view is treated with a certain degree of sterile interpretation, one that works both for and against the artists on view.  The show focuses heavily on artists exploring documentation and public action, as well as those investigating notions of memory, history and fantasy.  In one room, public participations and documentaries by the anonymous Syrian collective Abounaddara dominate a full wall, investigating various public interjections and the country’s own violent struggles as points for the expression and transmission of daily life in the nation.  In another, historical liberation propaganda from the region can be viewed in a series of vitrines, underscoring the quite vivid demands and emotionally charged appeals that sit behind its armed conflicts. 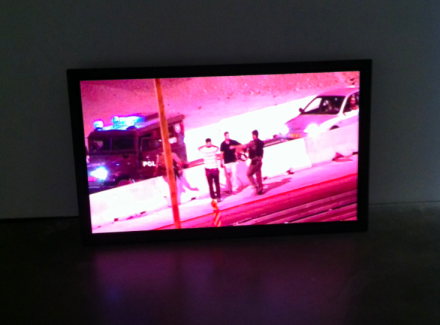 Of particular note is the series of works from Palestinian artists, often taking into account the nation’s tremulous, often violent relationship with Israel.  Lent even more potency by the outbreak of fighting between the two nations shortly after the opening of the exhibition, the works centered around the tightly controlled borders and racial politics that dominate the region.  Perhaps no one artist better encapsulates these situations than Khaled Jarrar, the Palestinian video and performance artist who was blocked from traveling to the United States for the exhibition opening by Israeli forces.  Jarrar, whose work has long investigated the imposition of force on the Palestinian population, is showing Infiltrators, a video documenting attempts by Palestinian workers to cross the Israeli border.  In one scene, Jarrar witnesses an attempted crossing fail, and the unarmed Palestinian beat by an IDF soldier.  In the moments of violence that follow, the reality of life in the blockaded, isolated nation becomes harshly immediate. 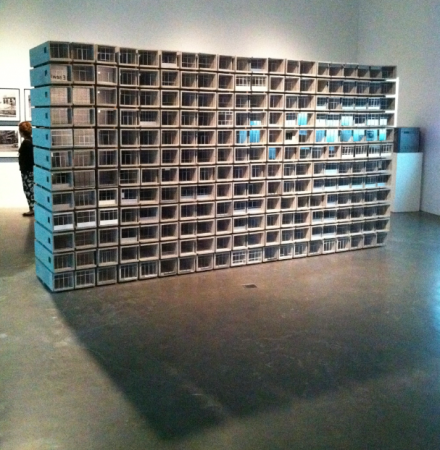 In other works, the act of movement and migration takes a primary focus.  Bouchra Khalili’s The Mapping Project provides a tangible view of the movements that immigrants from Africa and the Middle East have embarked on, moving from Palestine or Syria to locations in the United States and Europe.  Tracing their routes across a map, Khalili allows the often abstracted movements of peoples, as well as their myriad reasons for leaving their homelands, to take an intensely visual bent. 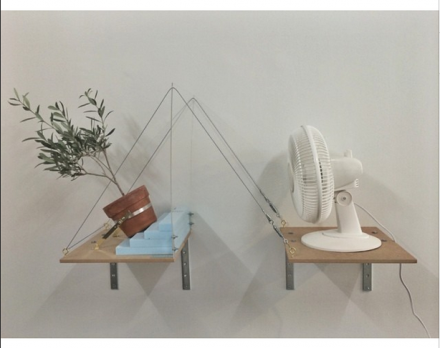 Given the current fighting in Syria and Iraq, an exhibition of this sort could not be more important.  The Museum makes a striking case for an expanded understanding of the Arabic world and its diverse political and ethnic spaces, but moves beyond a simple political advocacy.  What Gioni and his team have expressed here is an argument for these nations as concrete places, rooted by tactile landmarks, real human interactions, and specific economic imperatives.  What interpretations stem from these images is partially of the viewer’s own interpretation, but the picture itself is remarkably clear. 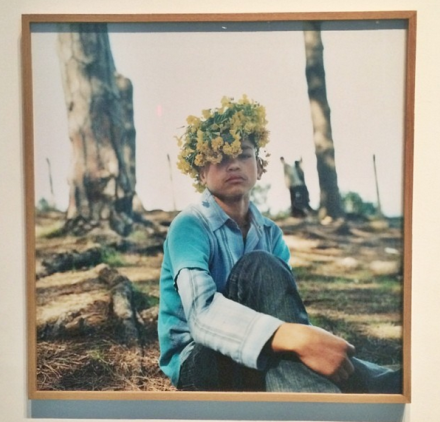 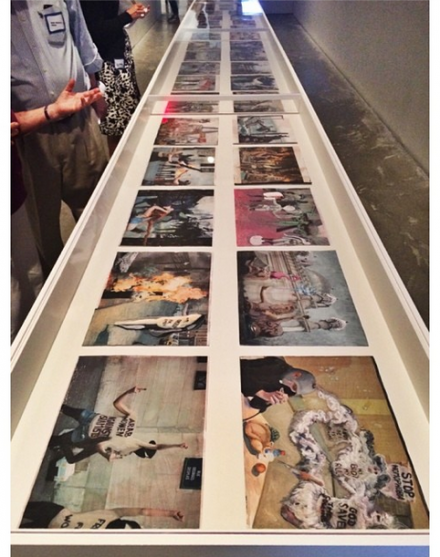 Rokni Haerizadeh, Series of gesso, ink, and watercolor on paper, via Art Observed 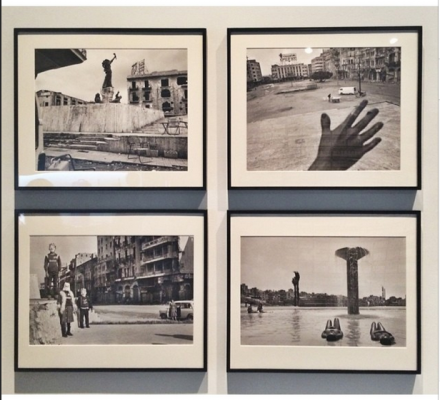 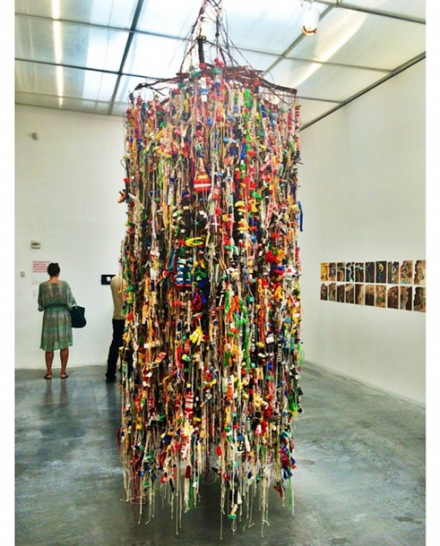 Read more:
New Museum [Here and Elsewhere]
“Out of Place” [New Yorker]
“Far From Home, an Arab Summer” [New York Times]
“An Eye-Opening Exhibition of Contemporary Arab Art at the New Museum” [Vogue]
“Beyond borders: Arab art from the frontlines” [The Guardian]
“Realities of the Arab World” [WSJ]

This entry was posted on Wednesday, September 10th, 2014 at 12:00 am and is filed under Art News. You can follow any responses to this entry through the RSS 2.0 feed. You can leave a response, or trackback from your own site.