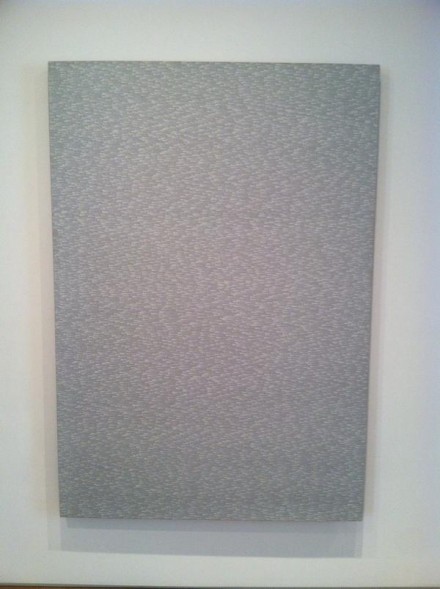 There’s any number of ways to approach Roman Opalka, whose work sits at the center of Dominique Lévy’s first show of the fall season (and the self-professed “most important show the gallery may ever host” according to Lévy herself).  One is through the visual content of his work, which is perhaps the most recognizable point of access.  Taking minimalist conceptual action to one of its natural conclusions, Opalka abandoned a gesturally abstract career in 1965, pursuing a new project: the painting, number by number, of the artist’s endless count to infinity.

Titling his works as “Détails,” Opalka stretched his life-long count to 233 canvases over the course of his career, an expansive, medium-spanning practice that incorporates elements of performance, documentation and minimalist painting (much like his late contemporary On Kawara), and which places his work as both material and immaterial.  Each day, the artist took to his counting, and upon completion, would photograph himself in the studio.  What results, collected in summary at Lévy’s 909 Madison space, is a graceful, unbroken line through Opalka’s fusion of work and life.  Both the artist’ process of aging and his ongoing strivings towards the infinite are placed into his work, and the selections on view allow the artist’s focused narrative to seep forth.  His paintings possess a certain ephemeral nature, allowing a certain flare in the act of recording that escapes other artist’s pursuing similar missions.  Each number varies in thickness and depth of color, rendering the canvases with an elusively flickering quality, growing whiter each year of the artist’s life.  By the end of his work, the canvases are a stark monochrome, requiring careful inspection to see Opalka’s tally.

Opalka’s work serried on the concept of the heroic, the herculean artistic effort towards the infinite.  His pieces place the full focus of practice behind a single, quite public exposition of effort; one destined, in fact, to fail.  The works, understandably, take on a certain degree of tragedy, bounding Opalka’s full output in a single piece from conception to his death.  No matter the goal, Opalka seems to assert, all work eventually ceases.

But at the same time that one is struck by Opalka’s determined thematics, the pieces offer an alternatively uplifting, delicate tone, hinted at by the artist’s early works from the 1950’s and 60’s (on view one floor up).  Testing the ongoing act of mark-making in a more vivid capacity, Opalka seems to have found his initial grains of thought here.  Moving from mark to mark, Opalka’s work slowly builds itself into a daunting mass of color and form, one which stands as a testament to a life lived in fervent practice, as a gentle accumulation of pieces that, canvas by canvas, unveil an impressive whole.

Opalka’s exhibition of works is on view through October 18th. 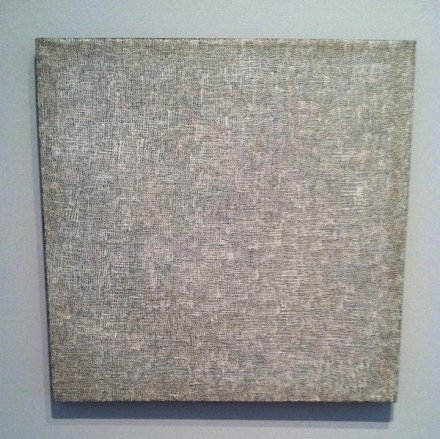 This entry was posted on Thursday, September 18th, 2014 at 12:00 am and is filed under Art News. You can follow any responses to this entry through the RSS 2.0 feed. You can leave a response, or trackback from your own site.