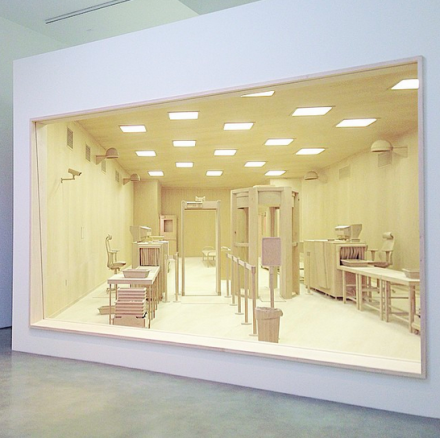 Roxy Paine makes work that can perhaps only be described as a challenge: large-scale carved wood sculptures capturing the most banal and unimposing scenes of contemporary American life.  Executed with a painstaking hand, the intense verisimilitude of his scenes and objects takes on a surrealist edge, oscillating between stark realism and its material grounding. 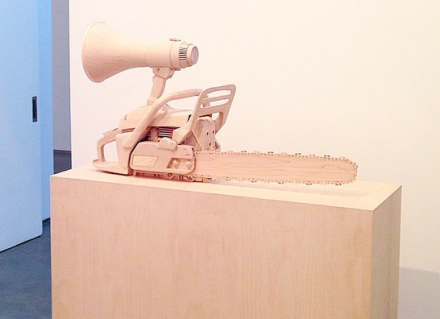 Paine’s formal dichotomy stands at the core of his new show at Marianne Boesky Gallery in Chelsea, consisting of a series of smaller sculptures alongside one of his signature dioramas depicting a TSA checkpoint.  Each piece is striking in its attention to detail, the X-Ray machine appears ready to operate, and the looming body scanner leaves an ominous impression of institutional power on the viewer.  The viewer can’t help but avoid a certain feeling of helplessness, faced with a familiar specter of bureaucratic force. 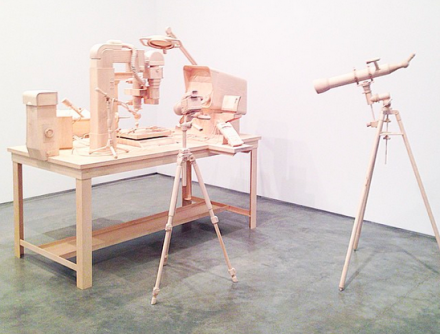 But at the same time, Paine allows a certain hyperreal subtext to destabilize the piece.  Set in a framed window, the installation appears as if it were intended as a painting, each line and form set against a shared vanishing point and produced in three dimensions to precise calculations.  Yet the real depth of the environment makes for an ultimately disorienting experience when the perception of space hits the occasional snag.  The metal detector seems slightly off balance, and the use of space is almost too perfectly aligned.  Extended viewing reveals slight flaws, hiccups in the execution of Paine’s scenarios, and in turn hold the viewer off from full immersion.  Trading between cautious attempts at realism and the flaws of his quite physical material, Paine seems to welcome these gaps in depiction, re-introducing a sense of confusion that makes the show’s title all the more literal.  Despite a nearly slavish attempt at simulacrum, Paine removes the lens from his work, and forces the viewer to adapt to the real impossibility of a fully recreated space.  For Paine, the act of reproduction is itself flawed, but that flaw opens new doors into the investigation and understanding of production as such. 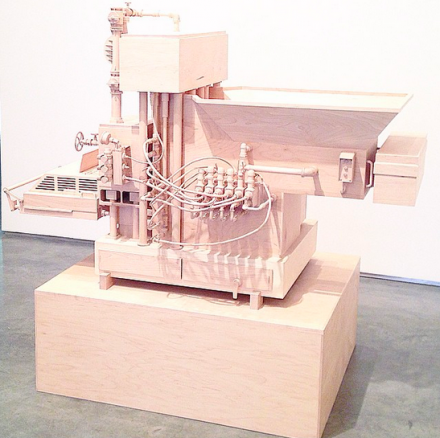 The diorama is accompanied by a series of smaller industrial sculptures, furthering Paine’s mix of surrealist fascination with the meaning of the works themselves.  Ever-present is the focus on detail, both in execution and the subject itself.  Despite their intense detailing, the works actually make little sense as mechanical devices, pieces that may not in fact actually serve any real purpose if they consisted of metal and circuits.  Paine’s works both utilize and emphasize modernity’s obsession with detail, with precision tools and techniques enabling a new clarity of both observation and work itself, where the viewer and the subject are bound in quickly shifting field of values and perceptions.

Denuded Lens is on view through October 18th. 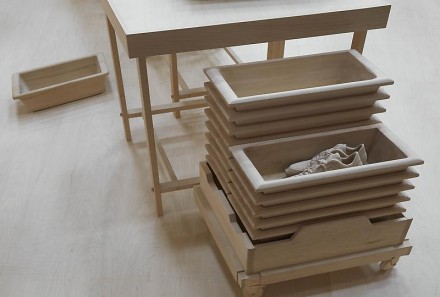 This entry was posted on Friday, September 26th, 2014 at 12:00 am and is filed under Art News. You can follow any responses to this entry through the RSS 2.0 feed. You can leave a response, or trackback from your own site.