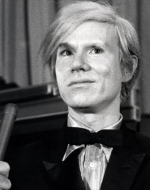 The New York Post reports on a recent suit filed against former Andy Warhol bodyguard Agusto Bugarin, accusing him of stealing of painting from the artist, and hiding it away for 30 years before trying to sell it in the past year.  “There is no indication that Warhol did or would have given his bodyguard a painting valued at the time in the hundreds of thousands of dollars — several multiples of Bugarin’s annual salary,” the Manhattan Supreme Court filing by The Andy Warhol Foundation for the Visual Arts says.

This entry was posted on Monday, October 27th, 2014 at 10:57 am and is filed under Art News. You can follow any responses to this entry through the RSS 2.0 feed. You can leave a response, or trackback from your own site.