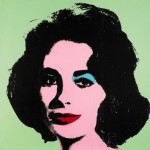 A set of celebrity portraits by Andy Warhol on sale at Sotheby’s New York in the upcoming weeks may earn as much as $57 million, Bloomberg reports.  The works include images of Liz Taylor, Brigitte Bardot, Jackie Onassis Kennedy and more.  “Warhol has international appeal,” says Suzanne Gyorgy, head of art advisory and finance at Citi Private Bank. “That kind of art is in a league of its own.”

This entry was posted on Monday, October 13th, 2014 at 8:07 am and is filed under Art News. You can follow any responses to this entry through the RSS 2.0 feed. You can leave a response, or trackback from your own site.