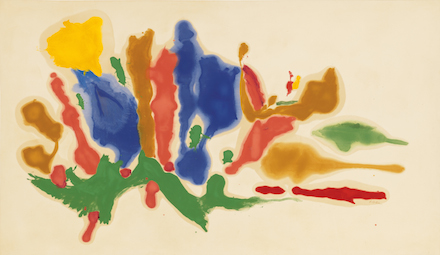 On view at Gagosian Gallery in New York is an exhibition of work by American abstract expressionist painter Helen Frankenthaler, focusing on a period of her career (1962-1963) in which the artist focused primarily on composing with color and tone rather than formal lines and shapes.  The display will remain on view through October 18th. 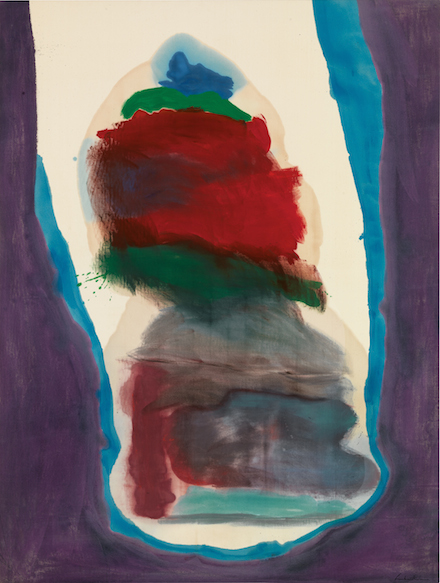 Frankenthaler was born in New York City in 1928 and died in 2011 in Darien, Connecticut, where she had a home and studio. Her career spanned over six decades, and several generations of abstract painters, but she is probably best known for her contribution to the history of postwar American painting. Her major influences were Hans Hoffman, a catalyst of the Abstract Expressionist movement with whom she studied in the summer of 1950; Jackson Pollock, whose first show Frankenthaler saw at the Betty Parsons Gallery in 1950 and experienced intense inspiration; and Clement Greenberg, an influential art and literary critic with whom she had a personal friendship. 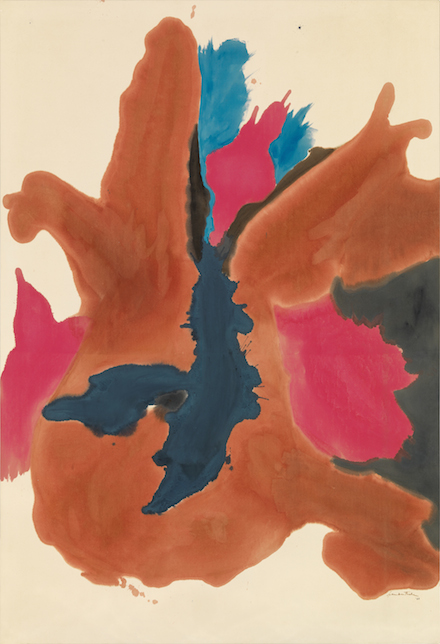 Prior to 1962, Frankenthaler had been making spare, graphic works defined by use of line, but the influence of the New York School on her work led to a sudden shift in style during the late 1950’s and early 1960’s, as she began employing washes of color, once described as “total color image.”  Frankenthaler was intensely employed with the contrast of color as the subject of her works alone, the interaction of her stains on the canvas as the sole point of action.  Some works from 1963 even include imprints of the floorboards of Frankenthaler’s studio, which were made by staining through the page, then reversing it and working on the other side. In this exhibition, most of the paintings are completely filled with color, and these works precede the development of her abstract vocabulary of the later 1960s.

The exhibition was curated by John Elderfield, and is accompanied by a catalogue with an essay by Elizabeth Smith, the Executive Director of the Helen Frankenthaler Foundation. The essay provides a unique context for the works – within Frankenthaler’s own development as well as within the environment of American Art in the early 1960s. 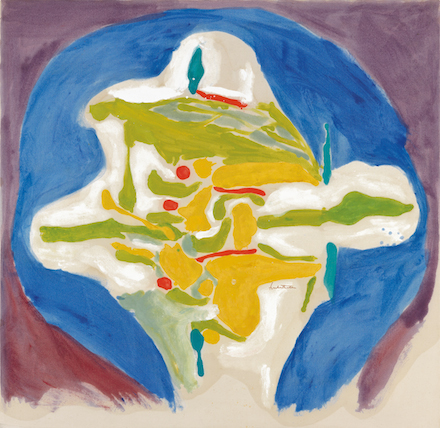 Frankenthaler has been the subject of several retrospective exhibitions, including a 1989 survey at the Museum of Modern Art in New York. In 2001, she was awarded the National Medal of Arts, and she herself served on the National Council of the Arts (of the National Endowment for the Arts) from 1985-1992. Her work is included in institutional collections worldwide, including the Art Gallery of Ontario, Toronto; Art Institute of Chicago; Metropolitan Museum of Art, New York; Centre Pompidou, Paris; National Gallery of Art, Washington, D.C.; Solomon R. Guggenheim Foundation, New York; and the Whitney Museum of American Art, New York.

The current exhibition at Gagosian opened on September 11th and will continue through October 18, 2014.

This entry was posted on Thursday, October 16th, 2014 at 11:33 pm and is filed under Art News. You can follow any responses to this entry through the RSS 2.0 feed. You can leave a response, or trackback from your own site.