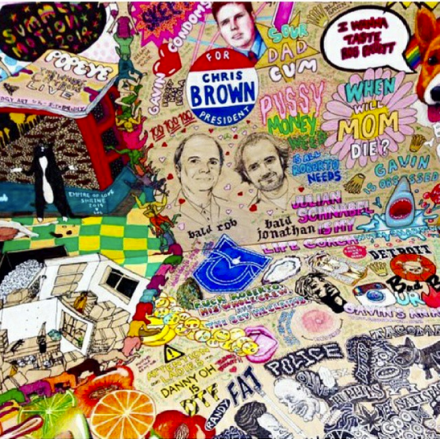 Detail from one of Rob Pruitt’s Furniture Pieces, via Art Observed

Rob Pruitt is back at Gavin Brown’s Enterprise this month, bringing a diverse and somewhat scrambled show of new works to the New York gallery, including a set of graffitied furniture pieces, a set of enormous minimalist prints, and as well as sculptural and painted works that deliver Pruitt’s iconic, tongue-in-cheek renegade style through a broad scope of material form. 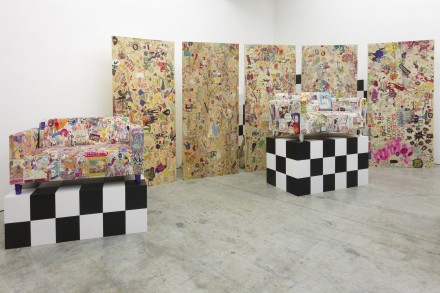 The show offers perhaps the most simultaneously concise and expansive exploration of Pruitt’s work in recent memory.  There’s his ongoing fascination with lowbrow aesthetics, from the homoerotic cartoons of Tom of Finland and the less critically acclaimed erotica using famous cartoon characters, to the tattooed surfaces of high school notebooks, bearing band graphics, sketches and bizarre drawings, to a certain fanatic obsession with American kitsch.  Then there’s Pruitt as a conceptual operator, clearing out his brain on a set of tightly executed gradients, and preventing any even footing around the works with several tons of sand.  In the last room, one sees Pruitt the cat lover, or perhaps the frenzied mind behind the works themselves, executing brash, violent canvases that don’t allow any inch of surface to escape without a harsh brushstroke or stab of paint. 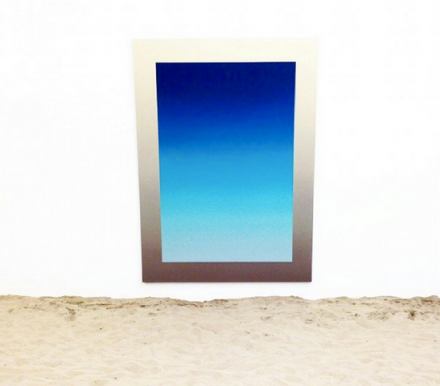 Pruitt’s work in the first room seems to be a near exhaustive act of artistic endurance, coating his couches and wood panels with almost every conceivable mode of sketched-out, roughly drawn and patently abrasive graphic he can possibly think of, and in fact, the works end up looking like a brazen attempt to catalog the full expanse of the subconscious in all its manifestations and possible memetic containers (it’s telling that Freud appears here alongside Hilary Clinton and Felix the Cat).  By contrast, his other two series of pieces are markedly restrained, with his gradient prints allowing a brief respite and moment of pause before delving into the frenetic energy of his paintings on view in the furthest space. 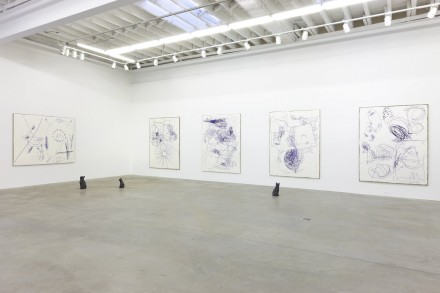 Taking the show name as a cue, one could assume this was Pruitt’s attempt at separating out his practice into definitive fields, standalone elements that allowed a sharper consideration of the whole.  But at the same time, the work often seems as an exorcism of sorts, as if the artist’s most minimal longings needed to be balanced out with a delve deep into the id.  Moving from room to room, the viewer finds little joining the divergent modes of execution, and instead must confront the artist in his varying personas and workflows. 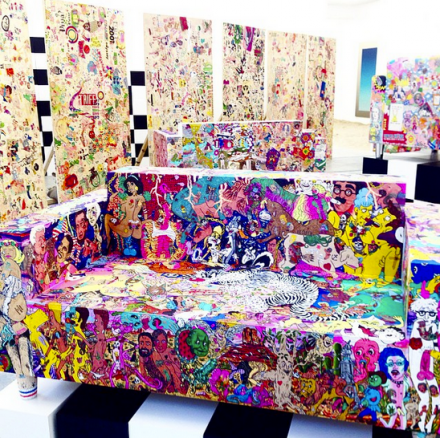 Even so, a moment of consideration brings certain thematics to the fore, among them Pruitt’s obsession with both cats and pandas (the former appearing both as cartoon analogues and sculptural figures, made from huge daubs of oil paint), and a certain fascination with both the visceral and the mundane.  His gradients seem just as interested in their state as household decoration as his furniture and wall pieces, and the mass of sand of sand before them seems just as much an attempt to subvert the language of the gallery as it is one to undermine that of home viewing.  The unifying forces are slight, but nevertheless present, and underscore the factors that make Pruitt such an interesting and unpredictable artist to watch.

Multiple Personalities is on view through October 25th. 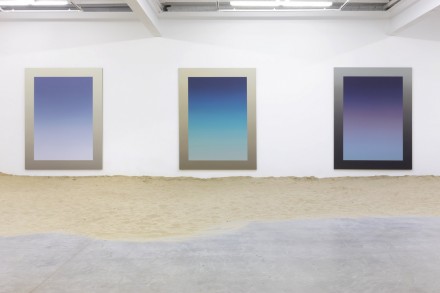 This entry was posted on Thursday, October 23rd, 2014 at 3:00 pm and is filed under Art News. You can follow any responses to this entry through the RSS 2.0 feed. You can leave a response, or trackback from your own site.