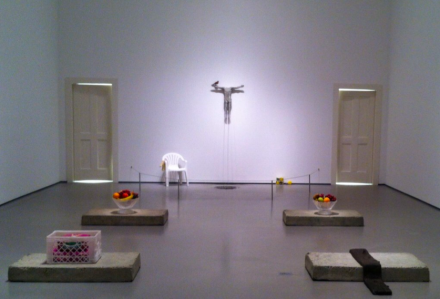 The long-awaited MoMA retrospective for Robert Gober begins in fitting fashiom. An immense, stripped-bare wall runs the length of the museum’s second floor outcropping, blocking off any view of the expansive installations inside, and capped with a single work near the entrance to the exhibition, the artist’s X-Pipe Playpen.  The viewer never realizes, passing through the exhibition, that at one point they have found themselves on the inside of this imposing structure, staring at the camouflaged wallpaper and sink sculptures that define the artist’s ouvre.  Ominous and surreal, the structure works perfectly in conjunction with the works on view, and offers a concise summary of the exhibition as a whole: a look at the full length of the artist’s prolific career, from his early paintings and sinks to his most demanding, complex environments, constantly examining and readdressing his emotionally potent take on abstraction. 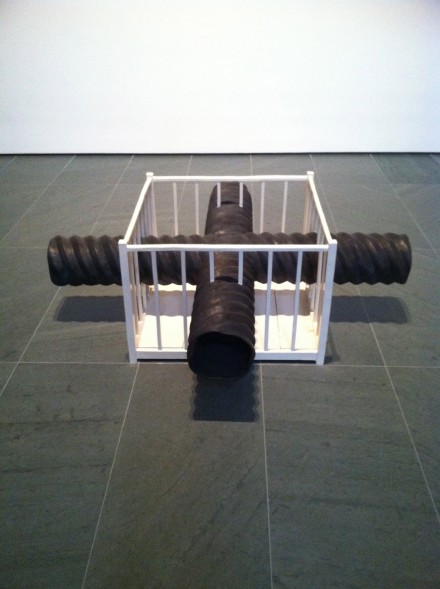 Gober’s fascination with the potentials for environmentally-driven art began early on in his career, with his experiments in wallpaper, sculptures of domestic fixtures, and manipulated furniture through to his layered, spatial installations, and offers a rich opportunity for Curator Ann Temkin to explore the progression of his aesthetic language.  In one room, his immense genitalia prints are balanced with his comically apropos Bag of Donuts, while in another, the gentle pastels of his state-themed wallpaper is matched well with the surreal spatial inversion of his untitled suitcase sculpture (which features a fountain and eerie figures buried underneath a sewer grate). 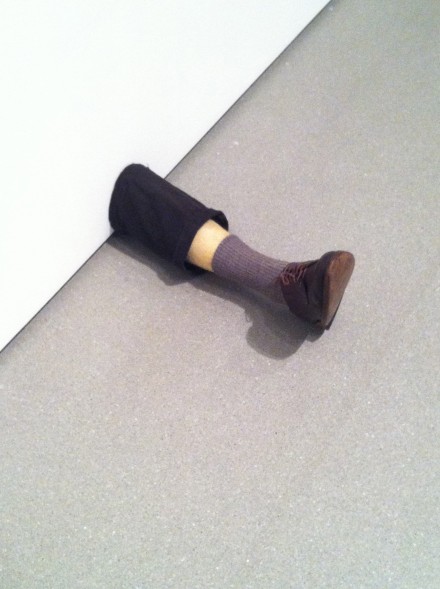 In each, the intersection of the abnormal and the familiar brings new elements to each piece. One cannot help but personify the stripped sink sculptures, where the holes left for faucets bring a subtle indication of a face, while nearby, male legs jutting out from corners and walls feel more like decorative fixtures than a body as such.  For Gober, the body and its constituent parts is as much an assemblage as a plumbing system or bedroom arrangement, with subtractions or removals of various elements revealing specific modes of use and materiality that binds both the body and the object more closely with its environment. 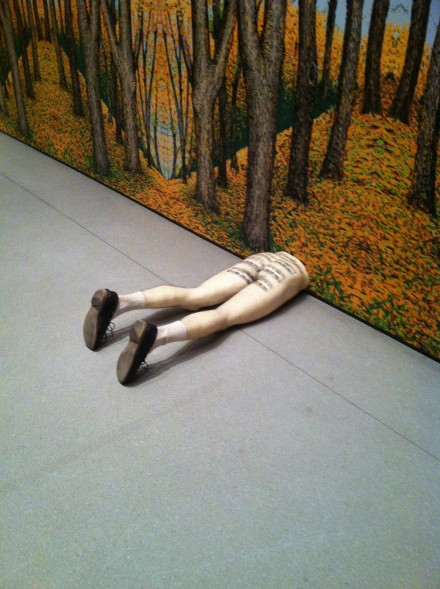 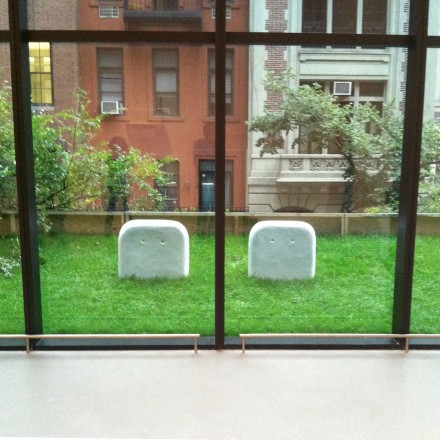 But the master stroke of the exhibition is how clearly this experimentation with meaning and embodiment gives way to the monumental installations of Gober’s later career, particularly the jaw-dropping arrangement of Untitled, his minimalist subversion of the Christian Mass.  Reducing the church tableau to a series of consumer objects, appropriated signifiers and formulaic conventions, the artist centers the room with a headless crucifix, pouring water from its nipples into a chiseled hole in the floor. 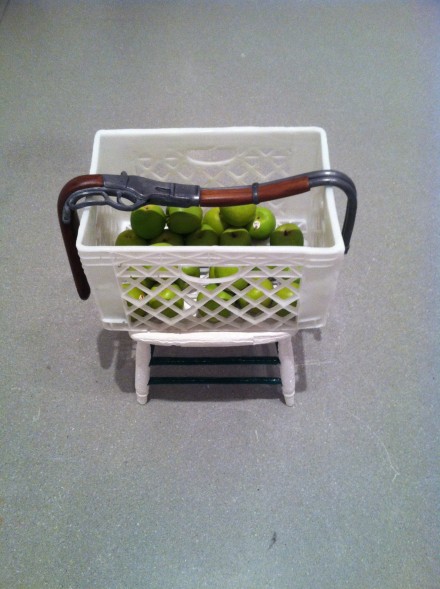 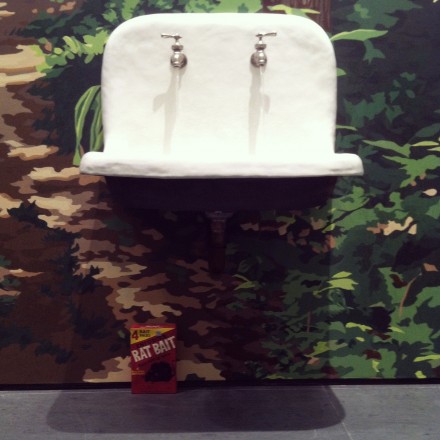 Gober’s arrangement is also dotted with newspapers from the September 11th attacks, and is flanked by a pair of cracked doors, where one can see legs soaking in a running tub.  Symmetry and form are applied studiously, allowing Gober to slowly subtract and replace each human element of the original form, and relegate the body in turn to a space of sacred absence, glimpsed only through a jarred door,  The human form, so frequently denuded or degraded in his work, is placed beyond the space of physical engagement, in a space where the viewer must approach an abstracted Christ to glimpse their own humanity, away from the objects that keep them mired in the banal. 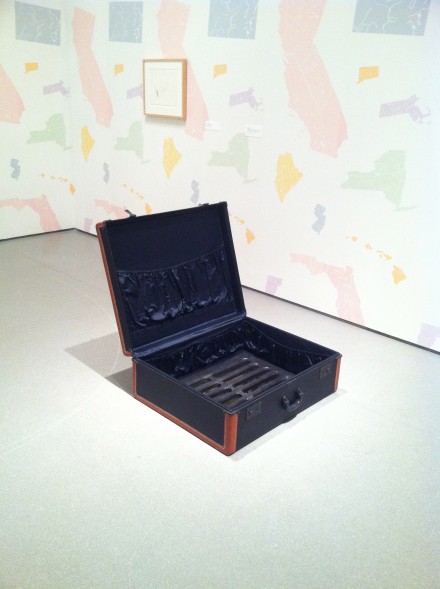 Robert Gober, The Heart is Not a Metaphor (Installation View), via Art Observed

These silent, momentary flashes are what make Gober such a powerful executor of the Freudian shock, using the space of the body and its equivalent parts to broaden the scope of human relations with modernity.  Throughout, the viewer floats in and out of their own awareness of self, alternating with an awareness of the skeletal structures that help maintain the form of the modern world.  Placed in a coherent, linear development, MoMA allows an expanded, fluid take on how far Gober has pushed his practice towards this goal, and hopefully how much further he may in fact take it in the future.

The Heart is Not a Metaphor is on view through January 18th. 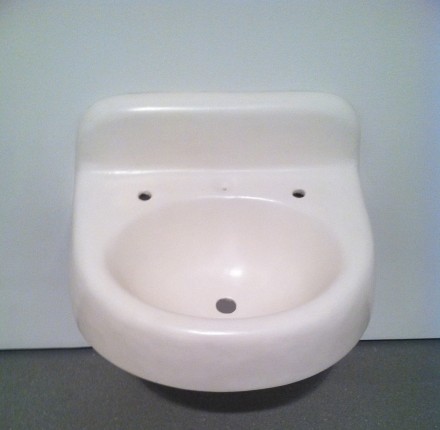 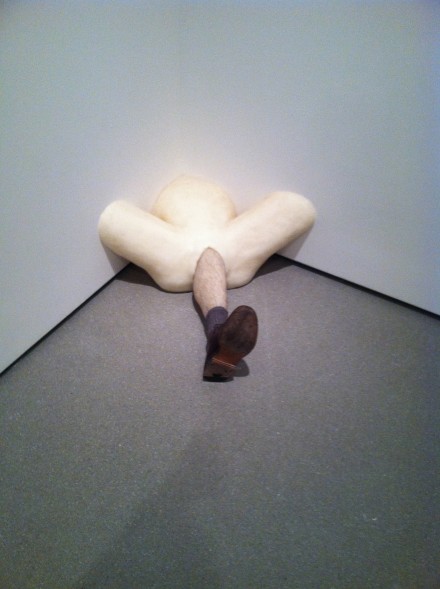 This entry was posted on Saturday, October 11th, 2014 at 12:00 am and is filed under Art News. You can follow any responses to this entry through the RSS 2.0 feed. You can leave a response, or trackback from your own site.