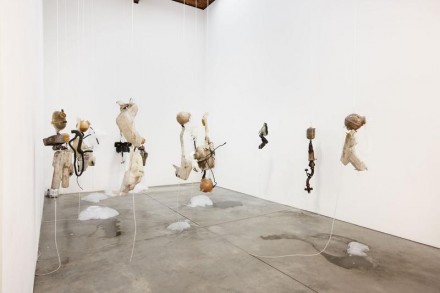 On view at Luhring Augustine is the first New York solo exhibition from London-based artist Roger Hiorns, comprised of a series of varied installations and objects produced in 2013 and 2014. The works will remain on view through October 18th. 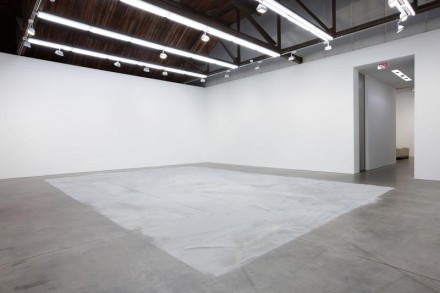 Hiorns is known for transforming found objects, often utilizing social encounters and urban situations as the fuel for these manipulations. Using elements of shock and surprise, often blurring reality with fiction, his clean elements underscore hint at certain structural or institutional flaws. Hiorns once created an exhibition, for example, where he pumped 75,000 liters of copper sulfate solution into an abandoned council flat, eventually a forming crystalline growths on the walls, floor, ceiling, and bath of the abandoned home. Entiteld Seizure, it earned him a Turner Prize nomination in 2008. Even more extreme, for the 2007 Athens Biennale, Hiorns smeared the lights of the Parthenon with his own sperm. 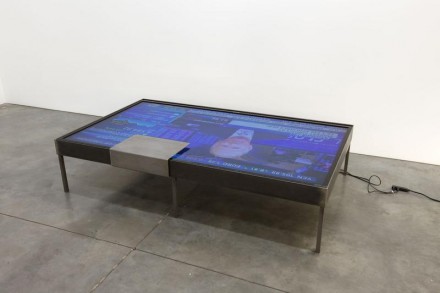 The works on view, all untitled, include a rectangle of grey powder spread over a the majority of the floorspace in the main gallery; a nude male model wandering around a large block of stone and a low table (or seating surface)- the top of which is a TV monitor displaying video content from the Wall Street Journal.  In a third gallery space, plastic contraptions made from automobile parts are strung from the ceiling and connected to a compressor, slowly excreting foam onto the floor.  The rectangular space of grey powder is actually, as described by the exhibition guide, a “passenger aircraft engine and granite altarpiece” melted down and atomized into bits. Hiorns describes the connection between the aircraft engine and the altarpiece is that they are both “authoritative objects” which leave him feeling uneasy.  His method of atomizing them allows a certain power over their forms, free to move them en masse if he wanted, while also being able to physically disturb or alter their shape and placement. 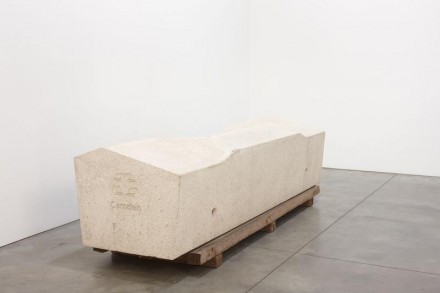 The large block of stone is a Camden Bench, a type of concrete furniture installed in Camden London in 2012, designed to deter undesirable street behavior such as sleeping, loitering, skateboarding, drug dealing, graffiti, and theft. It achieves this through its angular surfaces, the absence of crevices that can be used as hiding places, a weight so heavy that it can only be moved by a crane. The media listed by the gallery for the tabletop work is “Steel, flat screen, youth” as if the nude boy is actually considered an object used as media within the work.  Hiorns describes the description of “youth” as having a double meaning, so that the word youth can be also interpreted as a descriptive, or as if to say “here, ‘youth’ is present on the surface.” 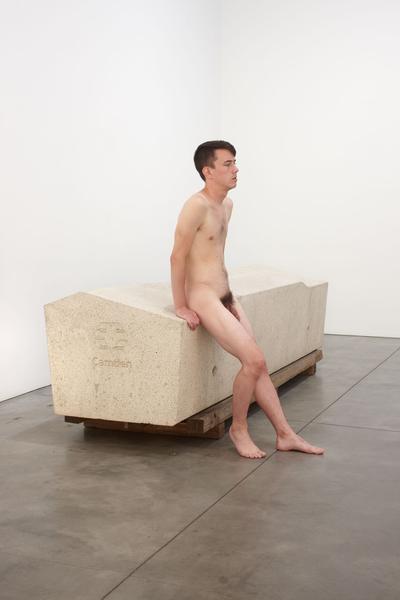 Similarly, the car parts and mechanical objects Hiorns turns into bubbling, foaming pieces were created from found objects near his studio, pieces that could be found or reactivated anywhere that cars are present.  From these, Hiorns decided to create humanlike forms from these car parts and, using the foam, turned them back into moving, productive objects.  In his conception, the works represent our common humanity, at least as represented by our connection with objects we commonly use and see in our environment.

The current exhibition at Luhring Augustine’s Chelsea location will remain on view through October 18, 2014. 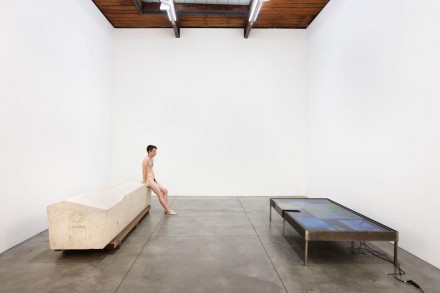 This entry was posted on Sunday, October 12th, 2014 at 12:00 am and is filed under Art News. You can follow any responses to this entry through the RSS 2.0 feed. You can leave a response, or trackback from your own site.