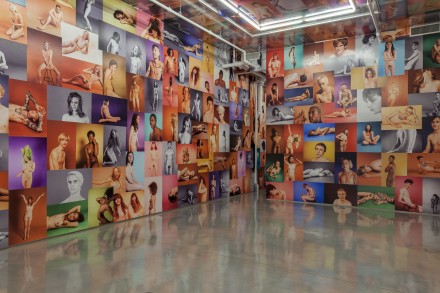 One of the most prolific contemporary American photographers, Ryan McGinley has continually photographed his subjects inside his Lower East Side studio for over a decade.  Two years after Animals, his series of nude models posing with live animals, the artist is continuing his exploration of the human form, as well as its positioning within a reserved studio setting at Team Gallery, where he has been showing for the last seven years.  YEARBOOK, however, expands on the notion of space beyond simply signifying an architecture for displaying art, embracing an alternative use of the gallery interior. 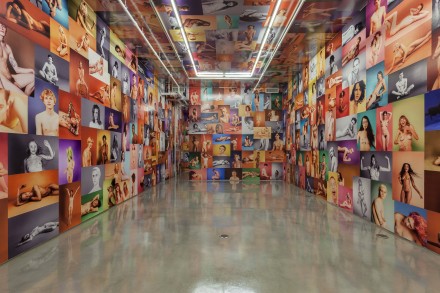 Covering every inch of Team Gallery’s Grand Street location, including its ceiling, are more than five hundred photos depicting some two hundred models McGinley has shot over the course of the last two years.  As one shifting, changing work of art, the undeniably captivating installation eclipses the architecture of the space, reversing the roles of the onlooker and the object.  Nude models, posing in front of bright candy colored backgrounds simultaneously gaze into the eyes of every visitor while experimenting with their degree of comfort in front of the camera. 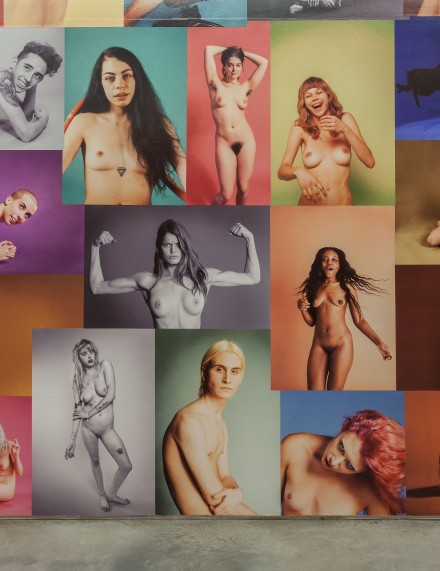 McGinley, who is internationally recognized for his lyrical depictions of youth in natural milieu, as well as his advertisement campaigns for brands like Levi’s or Uniqlo, is delivering a mature and progressive approach in YEARBOOK, both in conceptualization and execution.  Filling the SoHo gallery’s every corner with photographs of his models, printed on vinyl cumulates, into a bold and impressive display, the work triggers not only the standards of normative exhibition techniques, but also the borders of photography as a medium. Striking as an alternative to traditional production and displaying methods, McGinley orchestrates a collective portrait of contemporary youth through his own techniques for capturing raw, uninhibited personality. 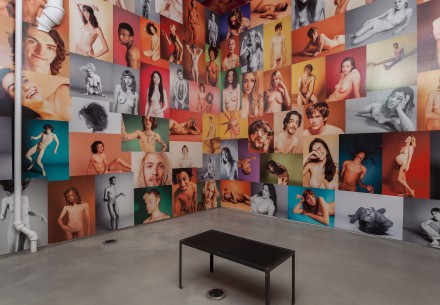 The gallery as an architectural edifice, made out of brick and mortar, unexpectedly integrates with the purity of the models, stripped down to their most intimate forms while underscoring the dialogue between the models and the artist. McGinley, who started his career documenting his circle of friends, later expanded his subject matter to a wider spectrum of models that are mostly selected by his assistants from the world outside of the often insular art community.  Each revealing a genuine vulnerability, the models blur the definitions of posing and spontaneity.

Ryan McGinley’s YEARBOOK is on view at Team Gallery through October 12, 2014.

*All images are the courtesy of Joerg Lohse.

This entry was posted on Tuesday, October 7th, 2014 at 12:00 pm and is filed under Art News. You can follow any responses to this entry through the RSS 2.0 feed. You can leave a response, or trackback from your own site.