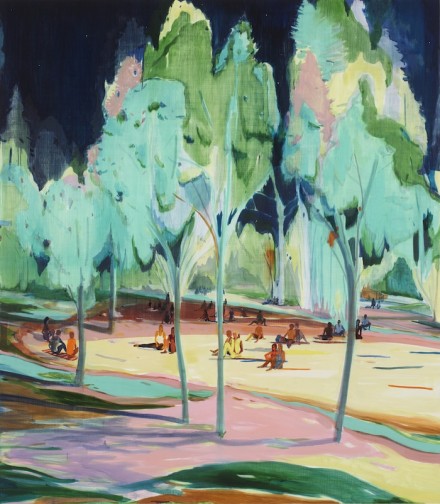 Galerie Thaddaeus Ropac‘s Marais gallery in Paris is currently presenting fifteen new paintings by Jules de Balincourt,  his third solo exhibition for the gallery.  Titled “Blue Hours,” the exhibition continues Balincourt’s exploration of broad expanses of bright colors that dominate many of his pieces, and bring the viewer into vivid worlds just beyond the bounds of reality. 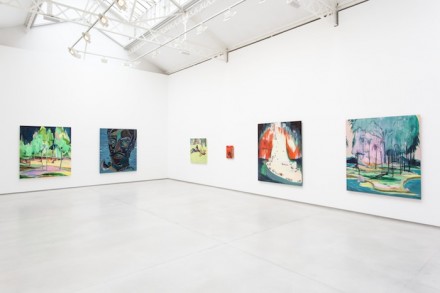 Working without preparatory drawings or other preliminaries, de Balincourt constructs his painted worlds by improvisation, guided by his subconscious and patches of color that often grow outwards into provocative final compositions. Underneath the Trees They Listened…and Heard Silence (2014), for instance, depicts a fantastical scene of brightly colored trees and land, with a narrow river running through.  The title points to a silence that seems impossible with the sounds of birds and running water the painting suggests, but the colors themselves have a certain abstract potency as well, alternating between an abstract composition and fluid landscape. 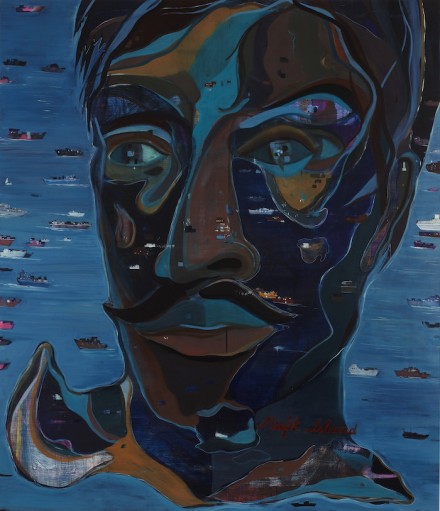 From a distance, de Balincourt’s works appear complete and unified, but closer examination often reveals purposeful inconsistencies within. Misfit Island (2014) looks from afar to be a portrait in shades of blue with questioning eyes casting a glance to the left. Closer inspection, however, shows that the interruptions in the blue background are in fact ships, and some spots in the center of the face-shaped island are people going about their lives. Though at first the viewer may connect with the emotions in the face—the raised eyebrow, the slightly parted lips—a long view of the piece shows this human visage to be a landmass.  The perspective is a mixed signal as well—the island is seen from a top-down view, but the goings-on in and around the island are viewed in profile. 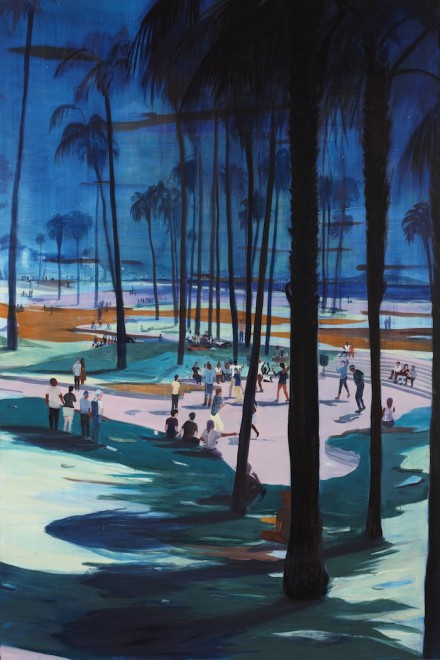 The tension between reality and illusion questions our assumptions about our surroundings, particularly in man-made settings. In As Far West As We Could Go (2014), a group of people appear to be congregating on a sandy beach filled with palm trees, but what seems to be the ocean is a raised platform, with painted shades of turquoise reminiscent of breaking waves. The viewer wonders, if not the ocean, what may actually stop people from venturing further west.  This and Misfit Island (2014) highlight the deception that can arise from building one’s own land. Both paintings depict ideal, peaceful locations that are not what they seem. 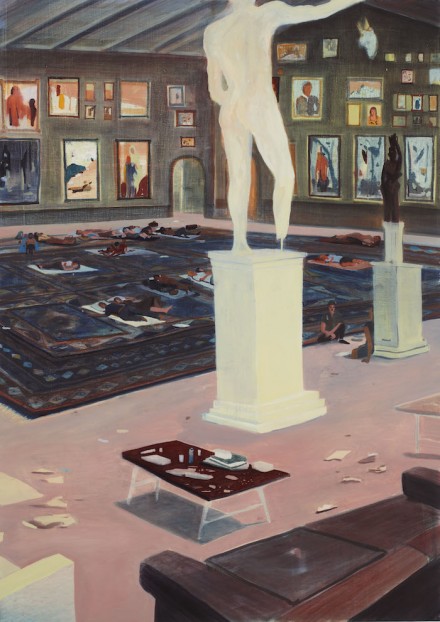 In another work, the interior structures of We come here to forget (2014) depict over a dozen people are stretched out on a rug in a gallery or museum, mostly in pairs. Some sleep, while others look to be involved in intimate conversations. Remnants of a meal lay discarded on a nearby coffee table. The title contradicts the sentiment museums evoke—remembrance of times past through the artifacts left behind.  Yet perhaps through these artifacts, the subjects are able to forget the reality that cannot be packaged in objects, and remember only what they choose. With this piece, de Balincourt continues to question what human intervention does to one’s mindset, while balancing his scenes between fanciful and real, calm and restless atmospheres.

This entry was posted on Monday, October 13th, 2014 at 12:57 am and is filed under Art News. You can follow any responses to this entry through the RSS 2.0 feed. You can leave a response, or trackback from your own site.