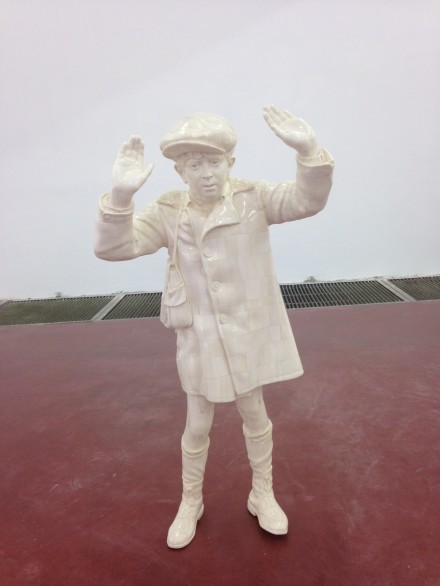 Tel Aviv’s Dvir Gallery is currently presenting a new body of work by the controversial Algerian artist Adel Abdessemed. Known for his highly challenging assemblies of sculpture, video and installation, Abdessemed has not been hesitant to problematize the dynamics of politics, religion and social justice from various vantage points and perspectives.  From gruesome footages of animal fights in Mexico to a giant twisted airplane, his art aims to thrill, shock and most importantly provoke. Far from subtlety, the London based artist delivers strongly vocal works of art, positioning himself as an anarchist and a rebel, with the intent of redefining the role of an artist in society. 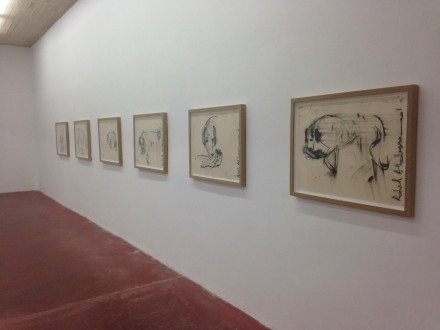 Covering Dvir Gallery’s three floors is a considerably austere selection of Abdessemed’s recent work, combining sculpture, video and drawing. The namesake and the centerpiece of the exhibition is Mon Enfant, a sculptural recreation of the iconic Holocaust photo of an anonymous boy raising his hands. Contributing to the intensity of his subject matter is the pure white tone of the ivory sculpture as well as the embodied three dimensional reality of the child’s expression.  Adding slight changes to the boy’s posture–such as the distance of his arms to his shoulders or the formation of his feet (not visible in the original photo) – Abdessemed underlines the nature of human condition with all of its stains and mistakes.  Standing as the reminder of the indelible shames in the history of mankind, the sculpture of the iconic boy not only represents a painful past, but also suggests a prospective future through its vibrance and tangibility. Created in the same height as the artist’s own daughter, the sculpture embodies the past, the present and the future as a reflection of human condition. 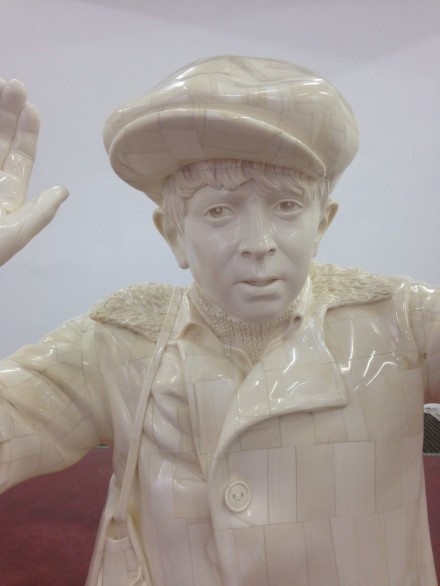 Accompanying to the sculpture is a series of black stone on paper drawings, each titled Personne, showings dogs depicted along with human hands. Blurriness of the narrative and the primitiveness of the depictions open discussions on the intent of the dogs and their relation to the human aspects of the work. Strongly metaphorical yet narratively vague, the drawings reflect on the unpredictability of the social dynamics in the contemporary era. 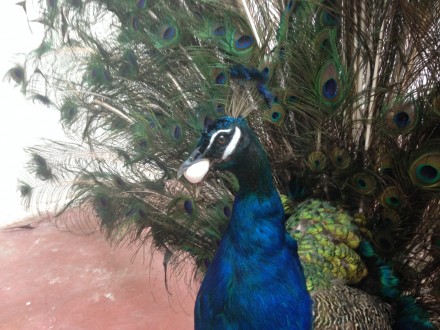 As an artist who has been the target of animal rights activists for using taxidermy as a mean of production, and footages of real animal cruelty in his videos, Abdessemed places Alexandre, a taxidermy peacock with impressive tones of blue and green with an egg in its beak, across Solitude, a video presenting a woman lying on a bed in an apparently emotional, fragile moment. The mesmerizing yet inanimate reality of the peacock curiously carrying an egg, symbolizing life and fragility, holds an unfamiliar harmony with the man-made artificiality of the video.

Nuance, a one minute long video showing a lusterless lightbulb eventually being stepped on by the artist himself, catches the viewer off-guard with its finale. The stepping of the artist’s barefoot onto the lightbulb and the shattering of the glass tie connections with the artistic drive to leave a physical mark as well as the intrusion of the man’s hand, or foot in this case, into the ongoing stilness.

Adel Abdessemed: Mon Enfant is on view at Dvir Gallery through October 11, 2014. 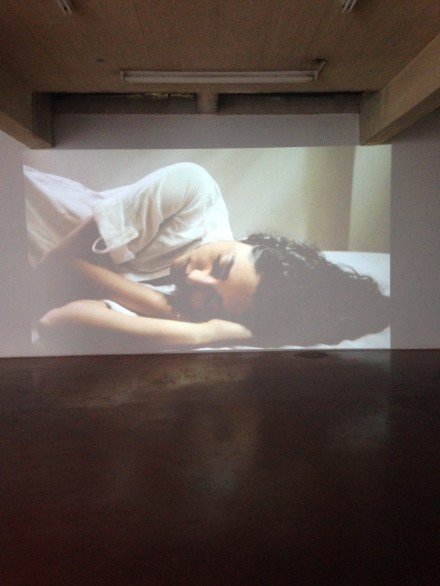 This entry was posted on Tuesday, October 7th, 2014 at 12:00 am and is filed under AO On Site. You can follow any responses to this entry through the RSS 2.0 feed. You can leave a response, or trackback from your own site.