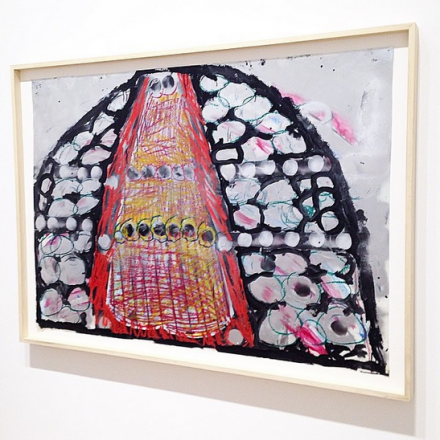 With auctions this week in London centered around the post-war Italian landscape, Pace Gallery has culled together an exhibition of works of artist Mario Merz, featuring a series of sculptural and painted works that illustrate the artist’s broad conceptual scope and his varying interests in the nature of architecture, materiality and space. 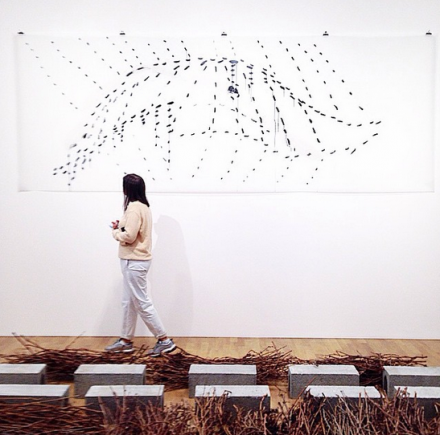 The first UK gallery exhibition for the artist in nearly twenty years, Merz’s show at Pace is an expansive collection of works, moving from his early 1960’s pieces through to a series of works completed before his death in 2003, fitting in with the artist’s complex and ever-shifting practice.  His landmark work Movements of the Earth and the Moon on an Axis, adapting his trademark igloo into a dual sphere structure is on view, as well as other built environments and a selection of paintings.  Throughout, his works pulse with a certain natural sensibility, often drawing spatial logic and construction from the Golden Ratio, and other naturally occurring mathematical figures. 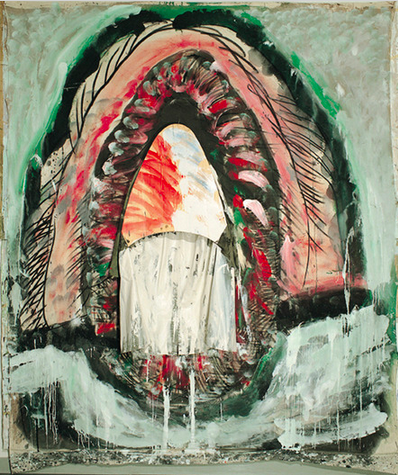 Given the space to unfold at Pace’s Burlington Gardens exhibition space, one gets a strong sense of Merz’s evolution, and his increasing fascination with the forms and formats of the world around him.  It’s this sense of the natural environment that finds itself snaking subtly throughout Merz’s various contemporaries, much akin to Giuseppe Penone’s exploration of trees and root structures.  But where Penone’s work delves into the agency of the object itself and the artist’s attempt to work with it, Merz’s work takes the structure itself, and its governing principles as his starting point, remaking the object as an aesthetic rather than utilitarian work, while never forgetting its initial forms. 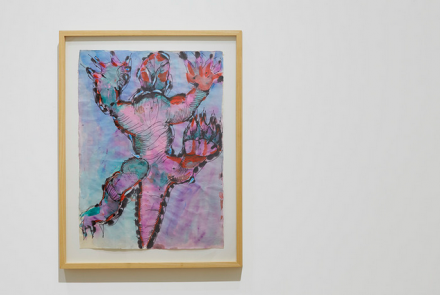 Taken as a whole, Merz’s exhibition here allows the artist’s various preoccupations with use, space and architecture over the course of his career, frequently alternating between traditional formats and fusions of various technical approaches.  In several works from the late 70’s and early 80’s, he mixes found objects with a wild, snaking hand, creating canvases that negotiate between the energy of the painterly gesture itself with the staid, occasionally pathetic objects Merz has attached.  By contrast, his untitled table sculpture is remarkably clean and elegant, spacing a single branch of Ivy running up from the glass surface and between a set of neons.  The work is evocative and confusing given its surroundings, but its interests in the movement and forces of growth play well against the more energetic pieces in the space. 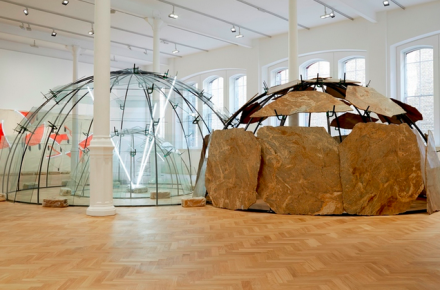 Mario Merz, Movements of the Earth and the Moon on an Axis (2003), via Pace

Merz’s work makes much of the space it’s been given here, with an intersection of times and techniques allowed just enough space to connect while remaining somewhat unified in its series of themes and context.  As a whole, Merz’s constant reinvestigation of the domestic, the transitory and the interstitial boundaries between the two is always given room to breathe. 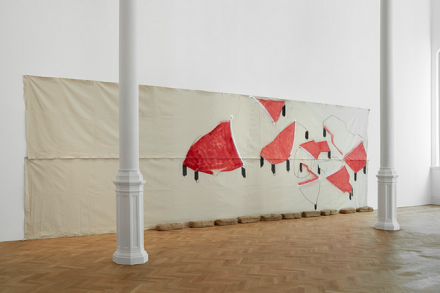 Mario Merz, Feathers on the Table (1991), via Pace Gallery 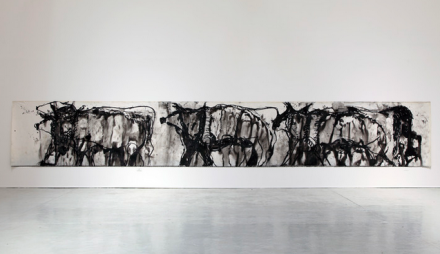 This entry was posted on Sunday, November 2nd, 2014 at 12:00 am and is filed under Art News. You can follow any responses to this entry through the RSS 2.0 feed. You can leave a response, or trackback from your own site.