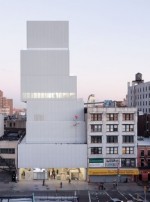 The New Museum has announced the list of artists for its 2015 Triennial, Surround Audience, which will be curated by Lauren Cornell and artist Ryan Trecartin.  The exhibition will include work by DIS, Casey Jane Ellison (who will be filming her web series Touching the Art at the museum), and Ed Atkins, among others.  According to the press release, Surround Audience “explores how artists are currently depicting subjectivity, unpacking complex systems of power, and claiming sites of artistic agency.”Read the press release

This entry was posted on Friday, November 14th, 2014 at 2:35 pm and is filed under Art News. You can follow any responses to this entry through the RSS 2.0 feed. You can leave a response, or trackback from your own site.