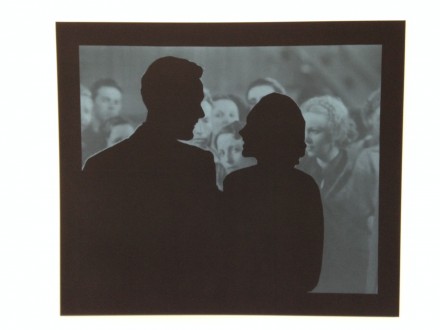 On view at Petzel Gallery is John Stezaker’s new series of screen prints, compiled from appropriated images of  1940’s and 50’s cinema.  Known for his ambitious collages of familiar and vague images from commercials, film posters and magazine pages, Stezaker has always been interested in the notion of silhouette as a tool for mysterious narratives and a metaphor for the representation of the subliminal. 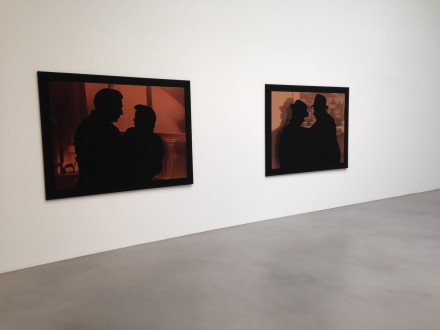 The British artist’s famous Dark Stars series delivers Stezaker’s interest in inventing alternative, yet not necessarily tangible interpretations within already existing images from popular culture. Visuals that have been coded into collective minds are allowed to evolve into distinctively unfamiliar but still ironically relatable forms. Boldly slicing, cutting and covering the archive, the artist embraces a technique that relies strongly on challenging the set dynamics of our collective understandings of aesthetics, body politics and semiotic interpretation. 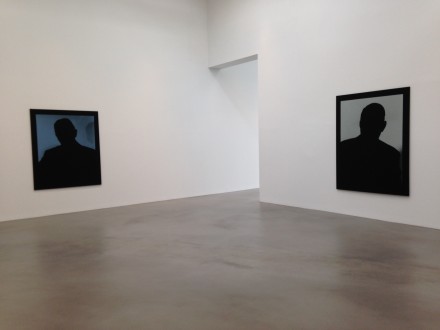 Covering the walls of the gallery with a foggy and uncanny atmosphere of Hollywood film noir, the silkscreens on view blend Stezaker’s common tendency for visual challenges with voyeuristic notions. For these silkscreen prints, the artist used film stills, dismantling the particular attributions that combine a nostalgic purity and mild ambiguity, while turning them into large scale prints in which silhouettes of anonymous actors grace the settings and disguise the actual plot and visual contents of a scene.  In one, a man and a woman are in a conversation about an unknown topic, while another features a group of men, ostensibly police due to their formal costuming, seem involved in a heated conversation about a case they are trying to solve. Twisting the basic premise of his subject matter movies, plots and faces disappear, leaving only shadows behind. Appearing as the symbolic reflections of what they actually wish to express, these figures question the viewers interaction with cinema, or furthermore with a pre-coded visual language. 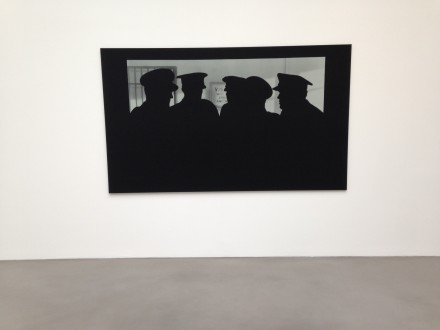 Stezaker’s emphasis on the film still as the materialistic reflection of film-making extends to Blind, a video piece he created using found film stills. Showing these stills running at 1/24 of a second, Blind builds a chaotic nature in which the seen and the dismissed blur into one entity. The speed of the changing stills is the specific speed that human eye is believed to become incapable of perceiving each separate image, and the industry standard for cinema film stock. With the blinding of the eye, the viewer loses the ability to comprehend each image, a metaphor for the challenge of observing and comprehending, forcing the disjointed poses of single images into the cinematic format they ultimately seek a connection with.

John Stezaker: New Silkscreens Is On View at Petzel Gallery Through November 8, 2014. 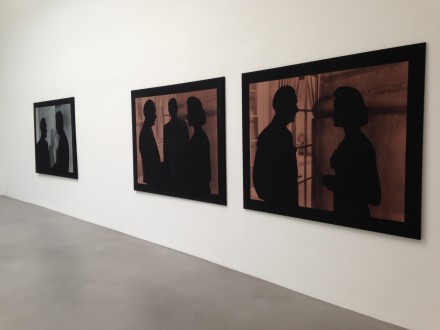 All images are by Osman Can Yerebakan for Art Observed.

This entry was posted on Saturday, November 8th, 2014 at 12:00 am and is filed under Art News. You can follow any responses to this entry through the RSS 2.0 feed. You can leave a response, or trackback from your own site.