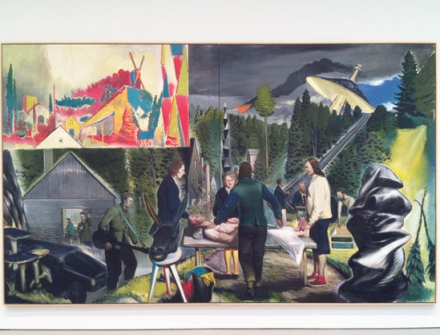 The newest show of work by Neo Rauch, on view at David Zwirner, is a fitting continuation of the German artist’s take on painting, combining surreal imagery with a vaguely familiar technique recalling the intertwined political and cultural history of his German homeland.

Frequently delving into the iconography and imagery of Germany in the 18th and 19th Centuries, Rauch’s work inverts the initially familiar with strange juxtapositions, alien depictions of the body, and a sickly color palette that evades immediate classification.  The works often seem stuck between worlds, a historical artifact bearing both the marks of age and subject matter that ultimately feels quite foreign.  In Über den Dächern, for instance, Rauch takes the familiar poses of lovers, and twists them savagely, adorning them with hands that seem ripped directly from a pair of crustaceans.  Nearby, more bizarre life forms lay quietly, as a pair of laborers look on. 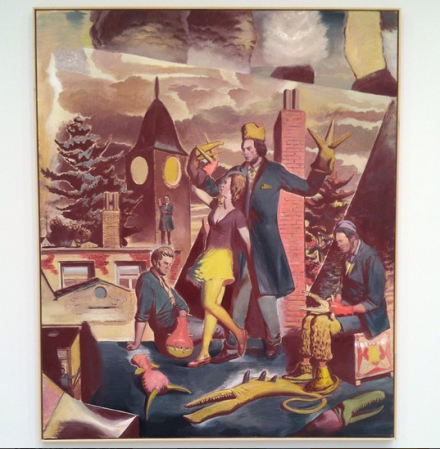 Rauch is a master of emphasis, and the works on view place a deep importance on the visual linkages formed by points of convergence and gesture.  Human and non-human subjects arc and twist, always directing their gaze of position towards a single focal point, or a certain space within the canvas itself.  In the immense work Heillichtung, for instance, the varied elements, from a quartet of men ominously touching a tabled body to what seems to be a UFO in the background, to the pair of unexplained Brancusi columns in the backdrop, take every opportunity to direct the viewer inward from the periphery, always returning to the man on the table. 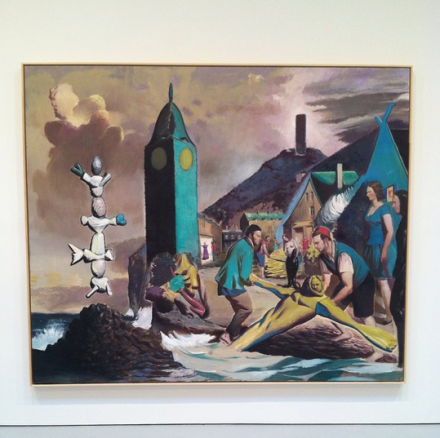 It’s these combinations of the familiar and the foreign that make the artist’s work so compelling.  His bodies are fusions of familiar poses, displaced memories from the timeline of art history that are allowed to stretch into new territory by their incorporation of horrifying or surreal elements.  Studiously combining these moments with flashes of modernity, Rauch’s work seems to break free from time, branching into a space of existence beyond the sum of its elements. 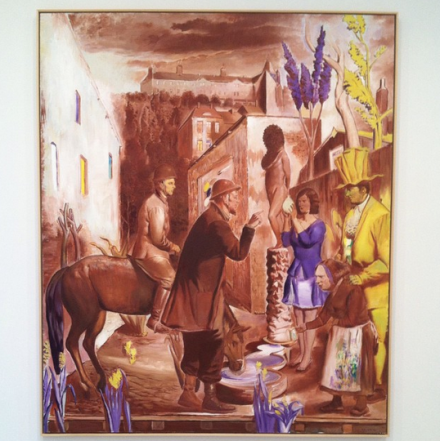 The exhibition also sees the artist delving more deeply into specific color relations, emphasizing his pale ochre undertones against vivid moments of purple and yellow.  In other works, a harsh red dictates the visual logic of the work, playing off against a pale brownish-gray.  In these pieces, one can detect a certain interest in the formal agency of the paint itself, an application of color that ultimately comes to define the internal rhythm of the piece.

At the Well is on view through December 20th. 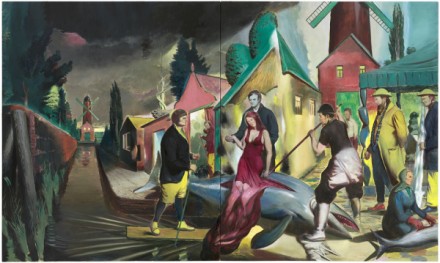 This entry was posted on Wednesday, December 10th, 2014 at 12:28 pm and is filed under Art News. You can follow any responses to this entry through the RSS 2.0 feed. You can leave a response, or trackback from your own site.