Currently on view at Fondation Beyeler in Basel is a survey of important oil paintings by Peter Doig (1959), as well as a number of seminal works on paper and a monumental mural.

Doig is considered one of the most successful artists of his generation, known for depicting landscapes in idyllic and remote locations, where, below the surface lies an intangible tension despite the beauty of the surroundings. His pictures can often be viewed as vibrantly-colored dream worlds, almost all of which derive their starting point from photographs or appropriated media like magazines or films. Through his transformative practice, Doig works up an enigmatic world where the secrecy of utopias and the darkness behind beauty are seductively revealed, often through vaguely familiar poses and forms. 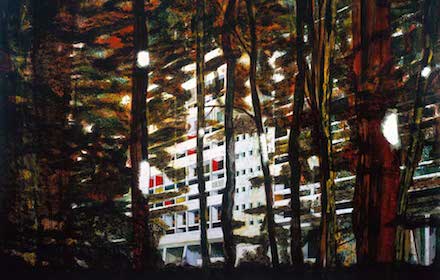 Doig has frequently stated his interest in physically losing himself in his work, both on the canvas and in its creation, and the size of his compositions bear testament to this desire. The artist has noted these large compositions enable him to “lose himself in looking,” even while he is in the middle of making these mysterious landscapes. For Doig, the aspect of escapism is essential, both in the message of the works as well as in his own artistic process. His paintings operate from a distance as well as from up close, and even take into account the weave of the canvas as an important factor. The minute details and physical characteristics of his material ultimately take on the properties of miniature environments, from which the larger landscape and compositional techniques emerge. 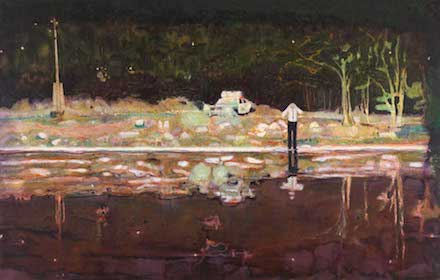 Doig is native to Edinburgh, Scotland, and in 1962 he moved with his family to Trinidad, due to his father’s work with a shipping and trading company there. He later moved to Canada, then to London where he studied at the Wimbledon School of Art, as well as at Central Saint Martin’s School of Art, and Chelsea School of Art, finally receiving an MFA. He returned to Trinidad in 2000 for an artist residency, and in 2002 he moved back to the island to set up a studio near Port of Spain.

The exhibition opened on November 23, 2014 and will remain on view through March 22nd. 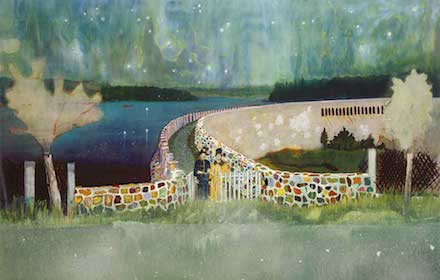 This entry was posted on Tuesday, January 20th, 2015 at 12:00 am and is filed under Art News, Featured Post, Show. You can follow any responses to this entry through the RSS 2.0 feed. You can leave a response, or trackback from your own site.