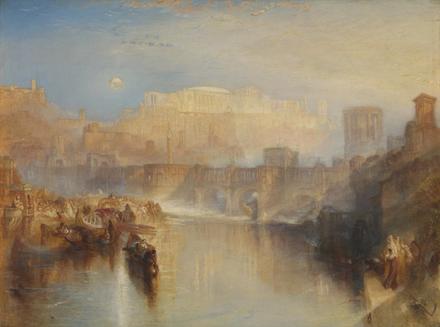 On view at the Tate Britain is the first exhibition devoted entirely to the work of Joseph Mallord Wiliam Turner, created between the years of 1835 and his death in 1851. The show brings together major series of works including a group of square pictures highlighting Turner’s tendency towards innovation, even at the end of his life. 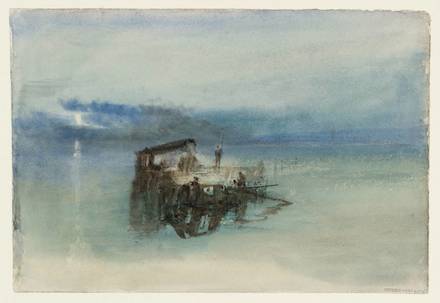 Known for elevating the art of landscape painting, J.M.W. Turner was born in 1775 in London, and died at the age of 76 in 1851 in Chelsea, England.  A biopic about the life of Turner, entitled “Mr. Turner” directed by one of Britain’s most celebrated directors, Mike Leigh, was released in November of 2014, and the exhibition seems to capitalize on the artist’s current mainstream attention, incorporating a series of works frequently alluded to on-screen, as well as other important works from the artist’s career. 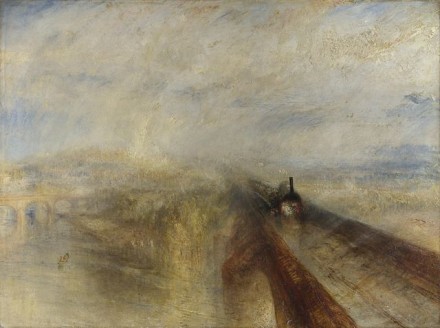 In Rain, Steam and Speed – The Great Western Railway (1844), while the theme is clear from the title, the subject is just barely recognizable, as the oils are used more transparently than ever before in Turner’s work, evoking almost pure light and shimmering color. Some of his later works are in fact cited as examples of abstract art, prior to its official recognition as an art form in the 20th century.  For, while he was fascinated with the exploration of the social, technological, and scientific developments of modern life, he was arguably more interested in evoking an image of Godly, evanescent light and space. This intensive exploration of the nature of light had an enormous effect on later Impressionists in Britain, but also in France, particularly Claude Monet, who was known to have carefully studied Turner’s techniques. 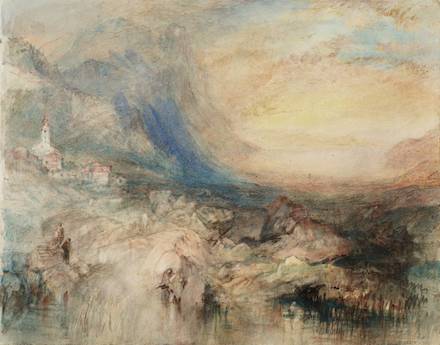 Joseph Mallord William Turner, Goldau, with the Lake of Zug in the Distance – Sample Study (circa 1842-3)

The exhibition ends with Turner’s last exhibited pictures from 1850, depicting lovers Dido and Aeneas, executed with remarkable vigor and energy considering his failing health. John Ruskin described Turner as “the greatest of the age,” and his death represented a great loss to Britain. His last words are said to have been “The sun is God.” This is significant because he was known commonly as “the painter of light,” and to him, light was the emanation of God’s spirit. For this reason, he focused his later paintings solely on the play of light, leaving out solid objects and detail in favor of scenes of water, skies, and fires.

Capturing Turner’s move towards a more ephemeral, experiential approach to painting, the exhibition is on view through January 25, 2015. 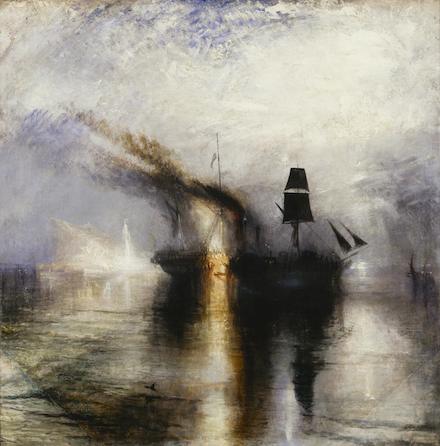 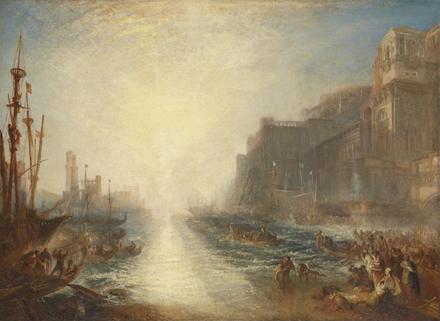 This entry was posted on Friday, January 16th, 2015 at 12:00 am and is filed under Art News, Featured Post, Show. You can follow any responses to this entry through the RSS 2.0 feed. You can leave a response, or trackback from your own site.