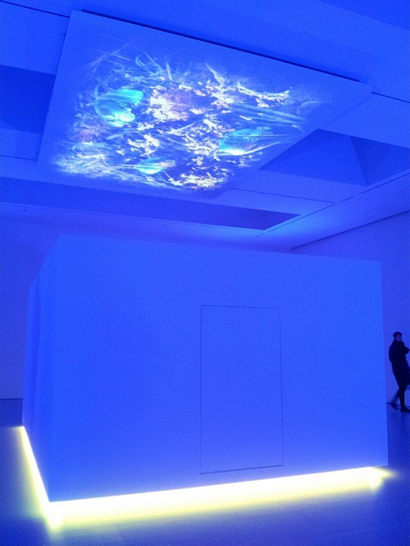 Diana Thater’s new exhibition on view at David Zwirner’s 19th Street Exhibition is an exercise in restraint.  Consisting of a pair of video compositions and a monumental structure in a light-saturated installation piece, the artist moves towards an experience of space, both in an immediate and more figurative sense, that engages the magnitude of human experience on both macro and micro scales.

Filling two rooms in the gallery with a deep blue light, Thater’s Science, Fiction leaves a lasting impression.  The intensely colored space obscures and blurs the edges of forms and fellow gallery-goers alike, countered only by a sharp yellow light emerging from the bottom of the solitary structure in gallery space, and the video projected out from its upper bounds (depicting a group of beetles plodding through the grass).  This segment is countered by a pair of glacial video pieces in the adjacent room, in which the artist depicts slowly spinning orbs, bearing a resemblance to a home-brew sci-fi prop.

A link between the two main objects is distinctly felt, despite their seeming incongruities, particularly if viewed from the shared vantage of human technology.  Looking at both the minuscule and the immensely grand, her single monolithic structure, glowing against the yellow light, seems to act as a mediating force, a stand-in for the human body that helps to strengthen a direct line of mediation, a metaphor for the human act of looking, analyzing and constructing meaning. 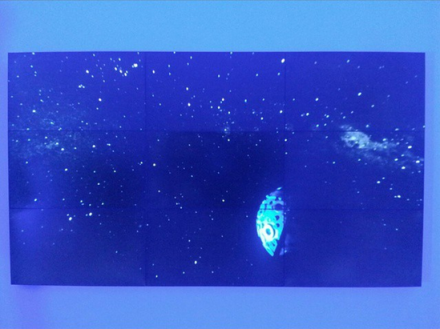 Yet there’s something funereal about Thater’s execution here, a sense of the cold, lifeless expanses of outer space directed back in towards the earth itself.  The only traces of life or movement in the work are the mechanical, circling orbit of Thater’s nondescript satellites on screen, or the equally nonhuman movements of her insects on the ceiling of the adjacent room.  It’s almost as if Thater separates the human elements of sight from the sights themselves, and replaces the viewer with a cold, minimalist stand-in.

The geometries  of the gallery space play into this emphasis: blue light pools in the corners, and blends subtly with the inflections of yellow to emphasize parallel lines and rigid arrangements that pull the space away from the familiar.  Merging her objects with the formal thematics of science fiction film and literature, the space is at times vaguely familiar and at others disturbingly alien.

Science, Fiction is on view through February 21st.

This entry was posted on Saturday, January 24th, 2015 at 12:00 am and is filed under Art News, Featured Post, Show. You can follow any responses to this entry through the RSS 2.0 feed. You can leave a response, or trackback from your own site.