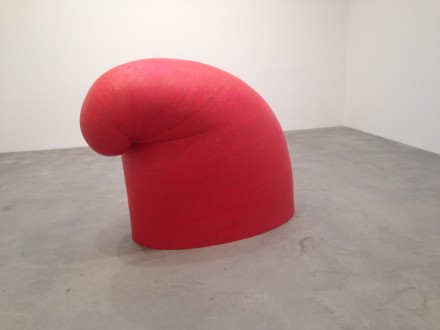 One of the foremost American sculptors from the second half of the 20th century, Martin Puryear has established himself as one of the canonic names of Modernist sculpture, merging Minimalism with labor intensive craftsmanship throughout his forty-year long career. The artist is currently presenting a new exhibition at Matthew Marks in New York, featuring ten new works reflecting the artist’s interest in political history, while remaining loyal to his abstraction-driven practice and his approach towards materiality, not only as means of production but also as a specific method of artistic expression. 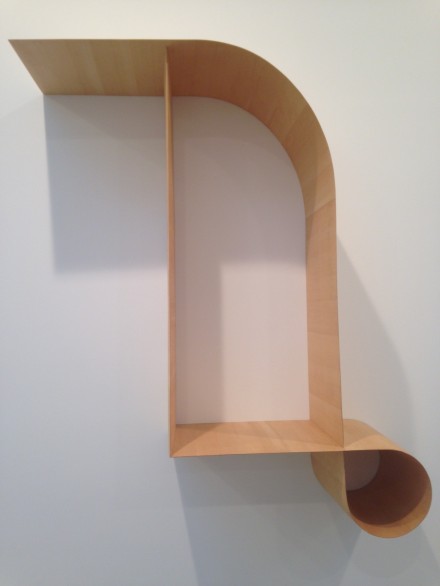 Among the materials repeating throughout the show, wood plays a crucial role, including works in maple, holly, cedar, walnut and ebony. On the other hand, bronze, cast iron and stainless steel cater for the artist’s juxtapositions of texture, maneuvering around representation while maintaining an abstract presence.  Puryear’s Phrygian cap, for instance also referred to as a ‘liberty cap’, appears as the central theme throughout the show. Worn by masses during the French and American Revolutions, presents a large size replica of this cap (Big Phrygian with), with its bright red color and mellow form, capturing the viewers with its striking visual challenge to its original subject. Gaining a declarative monumental aspect due to its smooth red tone and grand size, the sculpture quietly commemorates those who fought for freedom. 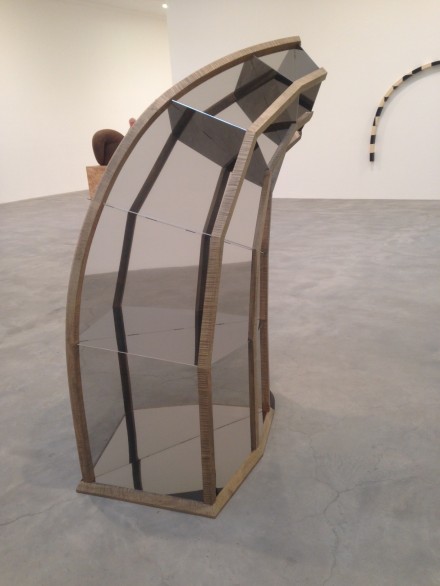 Phrygian Spirit on the other hand adopts a considerably less representational presence, minimizing the image of the attributed cap into a silhouette, a wall piece that is accentuated with an object hung from its center. Introducing a potential for mobility, this hanging part adds another dimension and a sculptural energy to the otherwise dormant two dimensional piece.  In another, the cap is abstracted into a twisted, loosely evocative form that also conjures a resemblance to a large cherry, turning the form into a series of themes and variations. 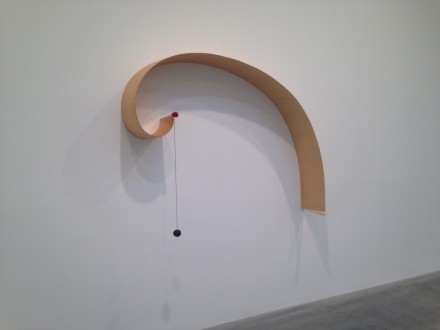 Establishing an alternative language through the potency of various colors and mediums, Puryear builds works that go beyond their materialistic presence, stretching into to a mediative and subliminal declaration.  His commitment to infusing the traces of collective history into his work gives the possibility of deeper readings for his conceptual formations. A cap, as mundane an example as could be possible for example, stands out to transfer arguments that are well beyond utilitarian limitations.

Martin Puryear is on view at Matthew Marks Gallery through January 10, 2015. 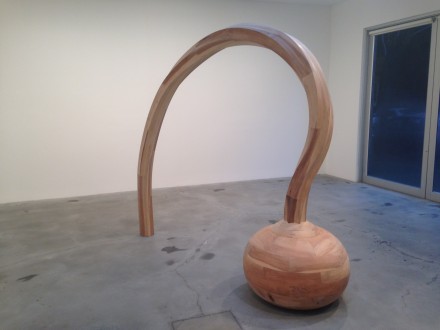 This entry was posted on Sunday, January 4th, 2015 at 12:00 am and is filed under Art News. You can follow any responses to this entry through the RSS 2.0 feed. You can leave a response, or trackback from your own site.