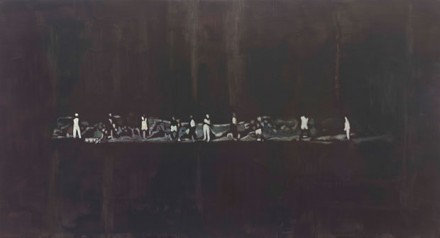 The Shore, a solo exhibition by Belgian artist Luc Tuymans is on view at the David Zwirner Gallery in London through April 2, a new body of work from the artist credited with helping the revival of painting in the early 1990s.  Since his early work, Tuymans has continued to produce compositions that interrogate and intervenes in the definition of this medium. He was one of the first artists to be represented by David Zwirner, joining the gallery in 1994, and The Shore marks his second solo exhibition in the space since Allo! marked the opening of the gallery’s first European location. 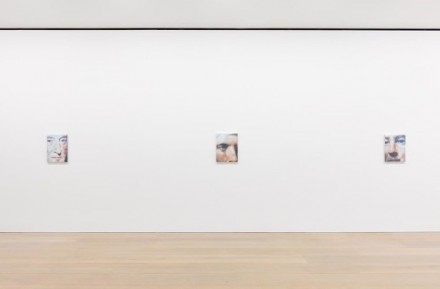 Tuymans is known for his engagement with images found or repurposed. Television footage, Polaroids, and magazine pictures are regularly featured in the artist’s work as a classical form while underscoring the trappings of visual representation. In this show, Tuymans has utilized images found online or photographs taken from his iPhone and printed, enlarged, or re-photographed many times over. The luminescence of light, reflected from these paintings and from the constantly rephotographed digital glow of the screen, brings out a strong, pixelated color palette of pale blues, a sort of haze that veils the work while addressing the fraught relationship between digital imaging and the act of applying paint to canvas. 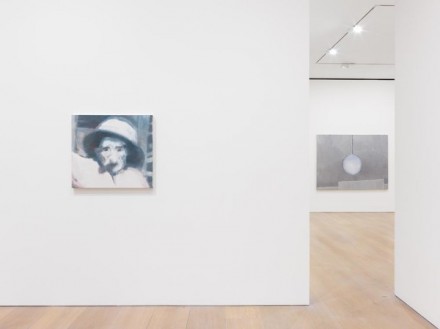 The titular painting of the exhibition is, according to artist, one of the darkest works he has composed. Several blank-faced figures, painted in deep violet and indigo tones, stand moments before their execution. Though Tuymans’ work is typically lightly-colored, this work was composed with a darker color palette and then smudged by the artist with toilet paper. Inspired by the pinturas negras of Spanish artist Francisco Goya, the scene is hauntingly ambiguous, but reflects the increasingly circulated imagery of the systematic executions military group ISIS has carried out and distributed both online and through major news outlets. The element of terror present in this piece extends throughout the show. A painting of Issei Sagawa, a Japanese student at the Sorbonne who cannibalized a fellow student in 1981, looms in haunting washed-out gray and blue tones. 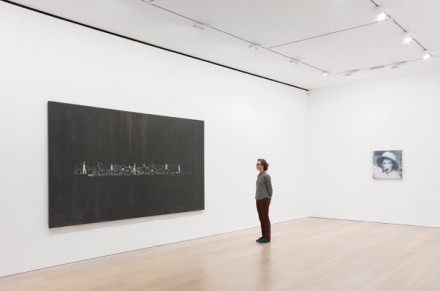 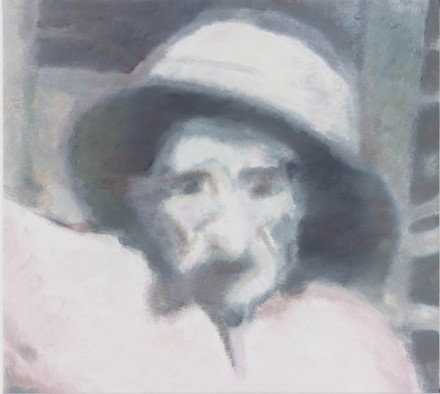 The Shore represents a weaving together of intense interest in visual trends of the contemporary moment and the capacity of art to conjure and reconstruct historical narratives. The specter of execution, of death and violence, in conjunction with the reanimation of historical subjects, and the portraits that affirm these legacies, are called into action in various forms, then placed in stark opposition. A fascinating collection of work by a master of this medium, The Shore calls upon its spectators to consider their relationship to the screens of both history and the present moment as they become increasingly blurry projections in their repeated articulations.

This entry was posted on Saturday, February 28th, 2015 at 12:00 am and is filed under Art News, Featured Post, Show. You can follow any responses to this entry through the RSS 2.0 feed. You can leave a response, or trackback from your own site.