New York – Mamma Andersson: “Behind the Curtain” at David Zwirner Through February 14th, 2015 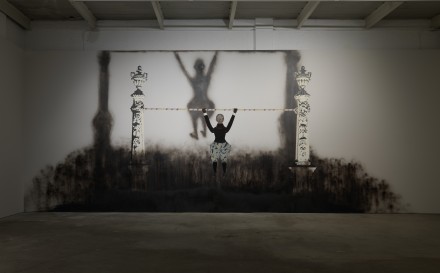 Currently on view at David Zwirner is Behind the Curtain, a new body of work by one of the most recognized contemporary artists from Sweden, Mamma Andersson. The Stockholm-based artist has gained international acclaim in recent years with her solo shows in Aspen Museum of Art, Douglas Hyde Gallery in Dublin and a mid-career survey that travelled to Finland and UK after its Swedish premiere several years ago. 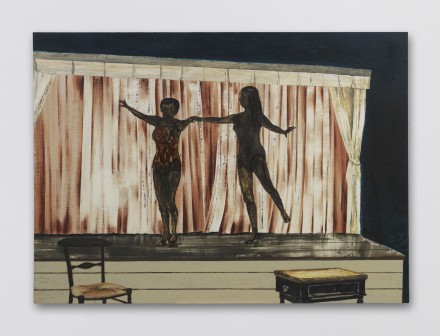 Mamma Andersson, Behind The Curtain (2014)

Andersson’s third New York show, following her 2006 debut and her 2010 collaboration with her husband, Jockum Nordström, is another step in her exploration of familiar techniques that maintain an eerie, mysteriously charged atmosphere within the gallery space. Ambiguity, playing a major role in Andersson’s paintings, dominates the depicted scenes, and her use of dark-toned foreign backgrounds reinforces their oblique nature. 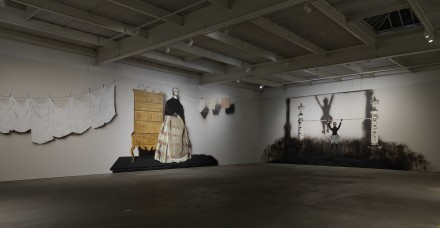 Behind the Curtain invites viewers into fluid, almost uncanny settings in which Andersson’s paintings of otherwise mundane elements, from piles of books to various collectibles, complicate the possibility of coherent explanations of narrative or storyline. Combining immersive environments that alternate between the real and the staged, supplemented by the equally perplexing demeanors of her very few human figures, Andersson establishes a tableau of timeless, placeless objects, each blending into her equally neutral settings. Wooden panel surfaces are coated with potent tones, or earthy colorsplay against her curious tales of an almost anemic spirit and withdrawn nature. 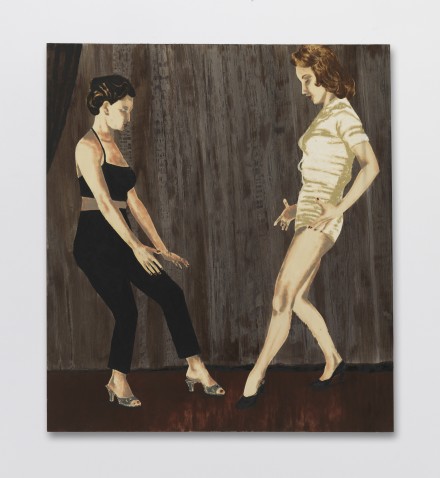 The traces of Andersson’s northern hometown, joined with her use of domestic interiors, merge with intricately and emotionally structured paintings. The contrast between the tranquil and the vibrant strikes the viewer throughout the show, perhaps most effectively embodied in the exhibition’s namesake piece.  Depicting two female figures amidst their performance on stage to a crowd that seems to be missing, Andersson’s work revels in its open-ended and puzzling situations.

Mamma Andersson: Behind the Curtain is on view at David Zwirner through February 14, 2015. 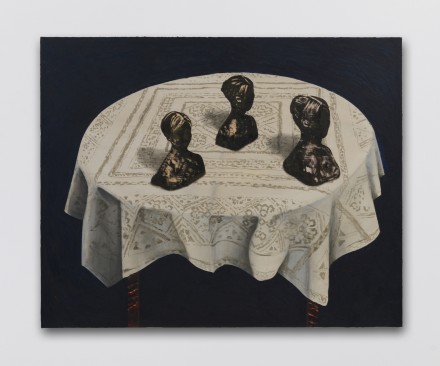 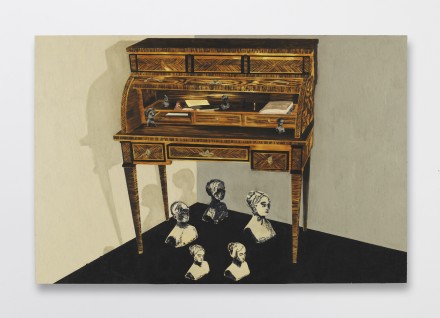 *All images are the Courtesy of David Zwirner New York/London

This entry was posted on Friday, February 13th, 2015 at 5:06 pm and is filed under Art News, Featured Post, Show. You can follow any responses to this entry through the RSS 2.0 feed. You can leave a response, or trackback from your own site.