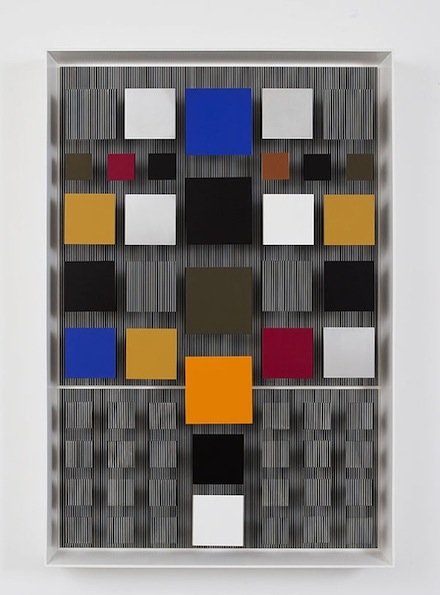 On view at Galerie Perrotin, both in Paris and in New York is a double exhibition dedicated to Venezuelen artist Jesús Rafael Soto, who lived from 1923-2005. Curated by Matthieu Poirer, the exhibition is comprised of around sixty works created between 1957 and 2003, drawn from the estate and from various institutions.  The title of the exhibition, Chronochrome, is meant to describe “the kinetic exploration of the monochrome,” a reference to the filmic production process that underscores the artist’s interest in multiple layers of carefully executed optics, creating a subtly shifting and alternating space within works for the viewer to discover. The eye’s movement back and forth, often between the two layers, the artist hoped, would produce a sense of visual vibration and a new perception of color. 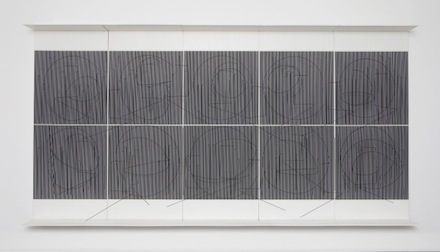 Soto’s first “optical vibrations” were created in 1950, when he worked with grids on 2 different levels: one irregular and transparent with silkscreened motifs or painted rods, and the second a series of finely painted vertical black and white lines. The result was a moving, vibrational effect, creating a throbbing strobe of motion as the viewer alters their relation to the work.  After this period, Soto abandoned two dimensional painting altogether in favor of reliefs. He paints two layers in order to draw attention to the space in between the layers, similar to a hologram or optical illusion. 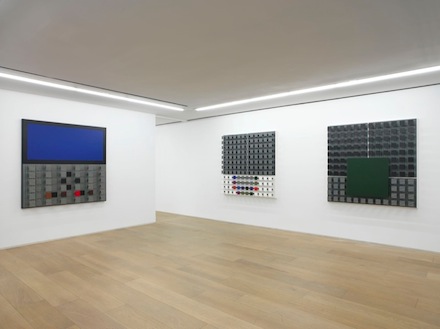 The fact that the works change as the viewer’s position changes implies that the viewer is constantly moving while viewing the work – an intentional choice. Soto wanted the viewers to explore their own perception of color and watch how it changes throughout space and over time.  In fact, the artist often made direct reference to the ambiguity of his works, pieces that, despite a cohesive execution, could allow interplay and exchanges between his various elements, with even sightlines and angles allowed to make a contribution on the work’s action. 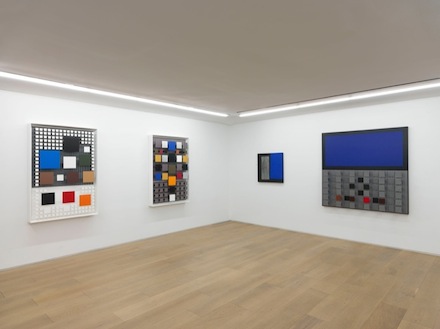 The current exhibition is an ambitious presentation of Soto’s work, pulling together a wide range of textured and multi-surface compositions from across his career to show the artist’s refined appreciation of the phenomenological aspects of art in general.  Position and space are, to Soto, equal collaborators, as much so as the viewer, and his works can be read as much as a targeted address to the visual systems of the human brain as they are to the conceptual operations his work take on the nature of the work in space. 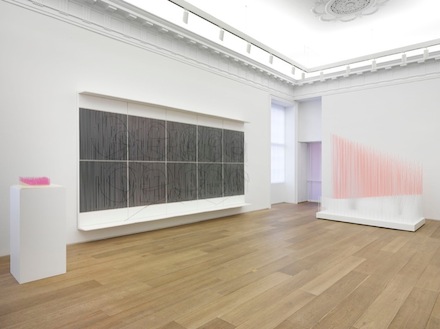 This entry was posted on Saturday, February 21st, 2015 at 12:00 am and is filed under Art News, Featured Post, Show. You can follow any responses to this entry through the RSS 2.0 feed. You can leave a response, or trackback from your own site.