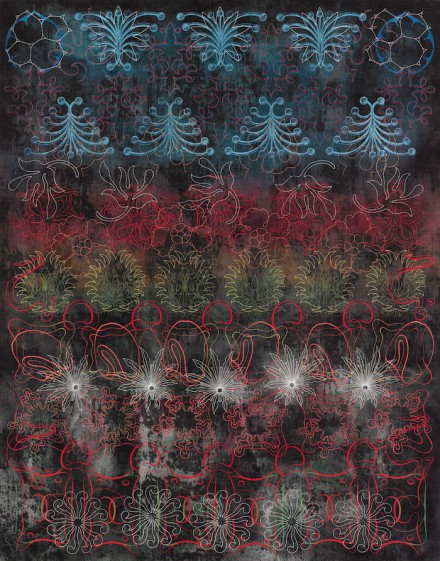 In his large-scale paintings on display at Luhring Augustine’s Bushwick Gallery, Philip Taaffe blends historical and cultural motifs in dizzying collages full of color and life. His exploration of shapes and designs spanning space and time draw on historical narratives to bring overlapping cultural archetypes into view. 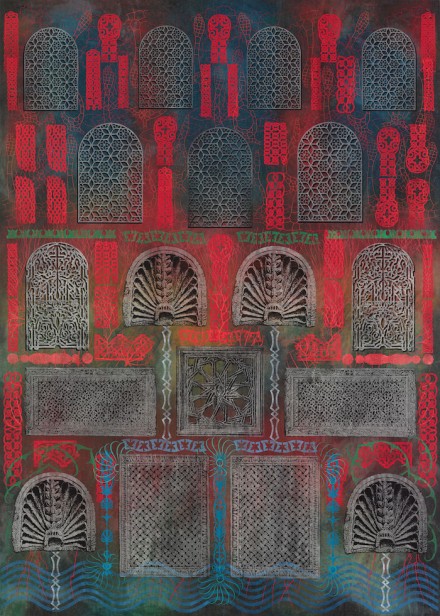 Focusing in on details from 11th- and 12th-century English monasteries, Taaffe constructed a paneled fountain in his painting Imaginary Fountain. In this painting, reddish sunlight appears to filter between the intricate stone carvings as water flows out of four rounded enclaves in bight blue patterned streams. In Choir, rows of stenciled outlines on a black background call to mind a choir on tiered risers, the sound of their combined voices greater than each voice on its own.

Though Imaginary Fountain and Choir have a clear order, others appear at first to be a jumble of shapes or patterns. Glyphic Field depicts an array of shapes, some simplistic depictions of animals, while others remain harder to decipher. Though they are spread across the canvas in seeming disarray, they fill the space uniformly, and their colors recur with some regularity. Spiral Painting II also initially appears to be a disorderly arrangement of spirals until the central vertical line of symmetry becomes clear. Taaffe explains that the spiral was the Mayan symbol for the eye, and his repeated use of it here reflects a desire to both preserve the past and peer into the future. 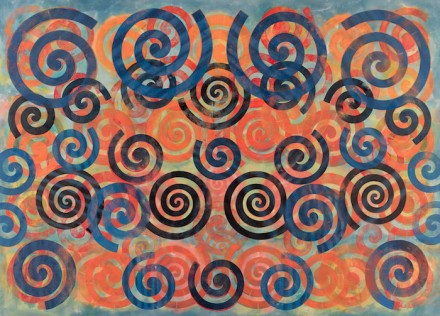 In an interview with Charles Stein of the Brooklyn Rail, Taaffe describes the experimentation that is built into his process of creating his large-scale collages. He lays down the pieces on the floor, then rearranges and removes pieces until the piece solidifies in his mind; what he takes out, he says, is as important as what he leaves in. He says of the process, “I discover connections in the course of making the work. I build that into the work, so these discoveries get constructed into the picture itself.” 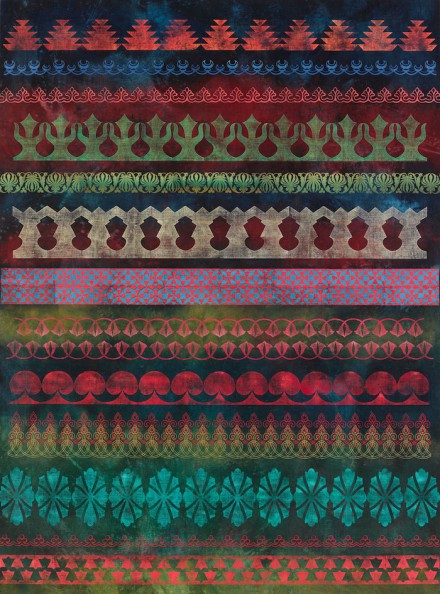 Cultural interpretations of designs, like the Mayan spiral, are significant in Taaffe’s work, and his act of dedicating one of his paintings, Nocturne with Architectural Fragments, to the people of Aleppo, Syria, where so many historical structures and artifacts have recently been destroyed, speaks to the importance he sees in cultural and historical heritage. His work places emphasis on the human elements of architecture and designthat is such a crucial underlying factor in the motifs and glyphic patterns he uses in his work. Through the connections he draws in his pieces, viewers may find peace in the intersection of historical imagery with their own personal stories. In his interview with the Brooklyn Rail, he says, “My ideal condition is to be outside of the work and to let these transmissions take place on the basis of my understanding and personal reflections and my urge to turn these tropes into something that is of palpable use … I think that an artist has to set up imaginary fields of possibility for the participant, the viewer, to help them connect with their own personal history, their own humanity, where they come from. That’s the dialogue that art provides. It’s how we carry on.” 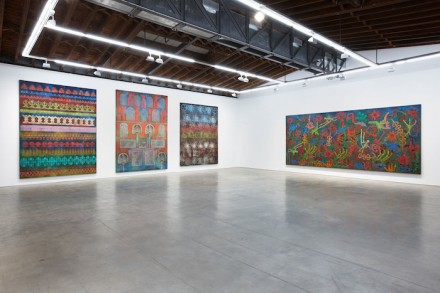 This entry was posted on Wednesday, March 18th, 2015 at 12:00 am and is filed under Art News, Featured Post, Show. You can follow any responses to this entry through the RSS 2.0 feed. You can leave a response, or trackback from your own site.