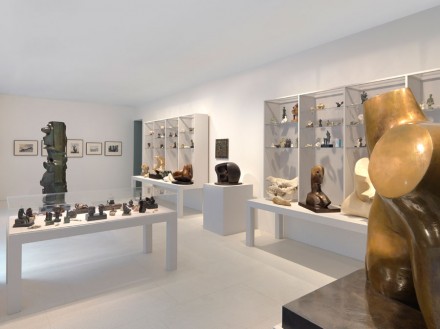 Gagosian London presents a new look at Henry Moore’s body of work in its current exhibition, a cunningly arranged series of small-scale sculptures.  Though best-known for his large abstractions of the human form, Moore’s inspiration often came from small objects he found in nature—pebbles, shells, animal bones—which have been preserved in his Hertfordshire studio in Perry Green, his former home and now a museum and headquarters of the Henry Moore Foundation.  These pieces are currently on display in this unique show demonstrating Moore’s artistic process. 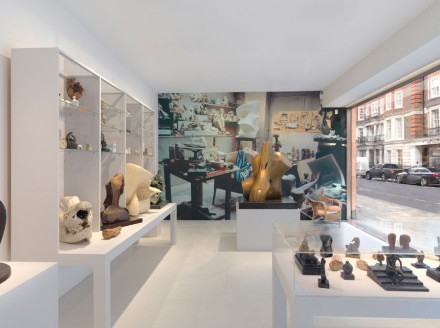 Items from Moore’s Wunderkammer (literally “cabinet of wonders”) are presented alongside the drawings and maquettes they inspired, tying together the artist’s active engagement with his materials and the forms he strove towards.  The collection, made available by the Henry Moore Foundation, allows the progression to be traced from object, to sketch, to maquette, and on to the final form. To make the process organic and allow communication between the found objects and the final sculpture, Moore often directly cast the objects in plaster to further explore their forms and accurately integrate their details into his work. 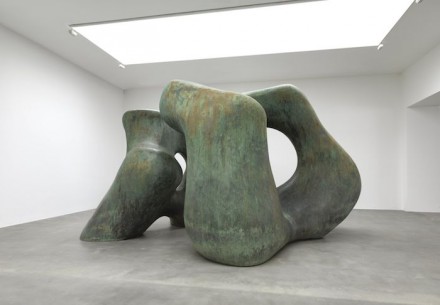 Moore’s sculptures are so commonplace in their outdoor environments, it is unusual to see them towering indoors.  Yet Large Two Forms (1969) dominates the biggest gallery in the space, the two embracing pieces showing signs of their outdoor wear in the green streaks that emerged from the oxidizing bronze surface. The exploration of the synchronous flow of the amorphous figures’ forms, and the alignment of its empty spaces, are common in Moore’s almost ubiquitous outdoor installations. 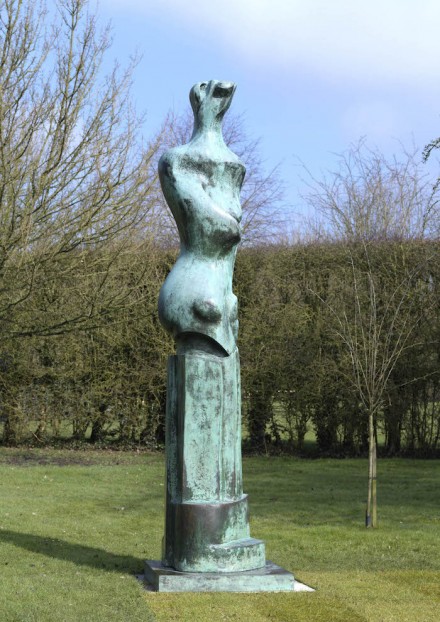 Henry Moore, Upright Motive No. 9 (1979), via The Henry Moore Foundation

Installed in Berkeley Square through May 29, two other large-scale pieces, Relief No. 1 (1959) and Upright Motive No. 9 (1979), provide further opportunity to see the progression from maquette to full-scale sculpture.  Relief No. 1 started with  maquettes for the brick piece Wall Relief in 1955, commissioned by the Bouwcentrum in Rotterdam, four of which are included in the Gagosian exhibition. Made of 16,000 hand-carved bricks, the piece is temporarily relocated while its building in Rotterdam is being redeveloped. With the same origin in the Wall Relief maquettes, the Upright Motive series present composites of disparate objects and forms. Upright Motive No. 9 overlays the smooth lines of a female form on an architectural column. A similar columnar stack can be seen in the exhibition in the maquette that served as a precursor to Upright Motive No. 5.

This entry was posted on Friday, April 3rd, 2015 at 12:00 am and is filed under Art News, Featured Post, Show. You can follow any responses to this entry through the RSS 2.0 feed. You can leave a response, or trackback from your own site.