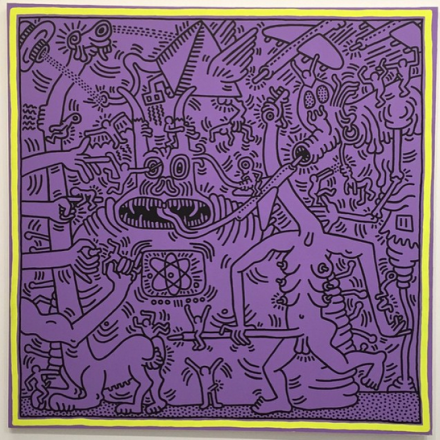 Culling a minimal selection of works from Keith Haring’s immense output over the course of his life, Skarstedt Gallery is currently presenting Heaven and Hell a series of colorfully surreal compositions from 1984 and 1985, several years before the artist passed away in 1990. 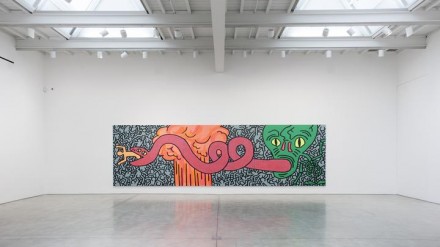 The exhibition draws its title from Haring’s occasionally catastrophic, even apocalyptic artistic vision, and the works reflect the darker shades of his work near the end of his career. While the text accompanying the show makes much of Haring’s love of duality and contrast, the paintings on view are decidedly diabolical.  Canvases depict flurries of violence and crisis, demonic figures and extraterrestrial conquerors raging through clusters of Haring’s signature flailing bodies, juxtaposed with vague biblical iconographies and references to ancient cultures.  Jumbo jets fly past winged pyramids, while in other works multi-headed characters devour human figures in hyper-loaded landscapes that recall the surreal style of Hieronymous Bosch. 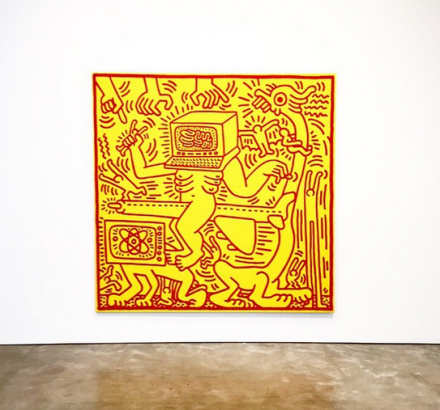 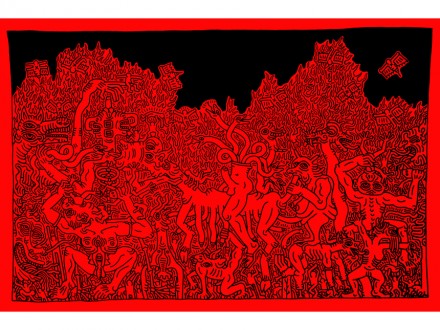 Throughout, Haring’s use of space is typically charged, allowing figures and images to play against their negative ground.  Works fade in and out of cohesion, often collapsing into swirling whorls of line and color.  But this style is only strengthened when Haring’s hand moves towards the more deliberate juxtapositions of other works.  In one particularly commanding piece, a serpent-tongued skeleton is played off against a mushroom cloud and what appears to be piles of bodies.  Although the canvas is no less energetic than the others on view, the deliberate use of color and form that Haring foregrounds here makes the final product all the more powerful. 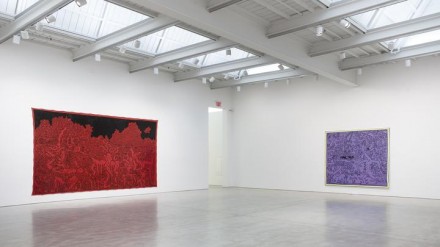 If there is an analysis of parallels at play here, opposition hardly takes the simple road.  Haring’s figures and specters are charged with a sexual licentiousness despite their imminent destruction, a sense of passion that is balanced only by the havoc that their sexual acts are committed in.  Given the work’s context in the early era of the AIDS crisis, the constant presence of phallic figures (seemingly used as weapons in some areas) and their roles in the work lends each piece a tragic undertone, as if his figures could not escape their worldly desires even in the midst of their annihilation.  In this reading, his accompanying paintings of sprawled bodies become all the more jarring. 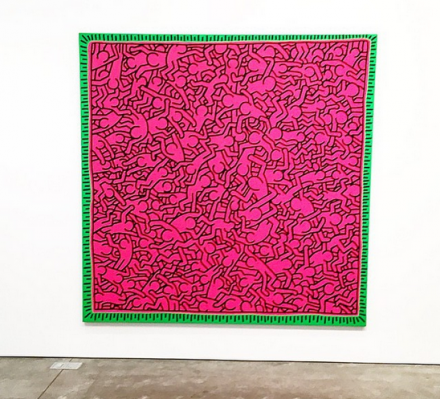 Offering a challenging look at Haring’s later works, Heaven and Hell is a powerful reminder of New York’s dark history in the waning years of the “Sexual Revolution,” and a heartening reminder of the artist’s uniquely human perspective on his work. 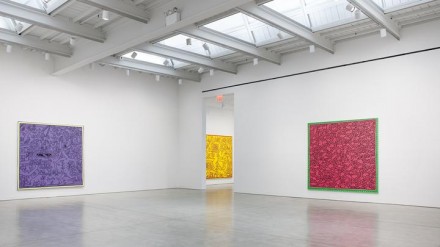 This entry was posted on Sunday, April 5th, 2015 at 12:00 am and is filed under Art News, Featured Post, Show. You can follow any responses to this entry through the RSS 2.0 feed. You can leave a response, or trackback from your own site.