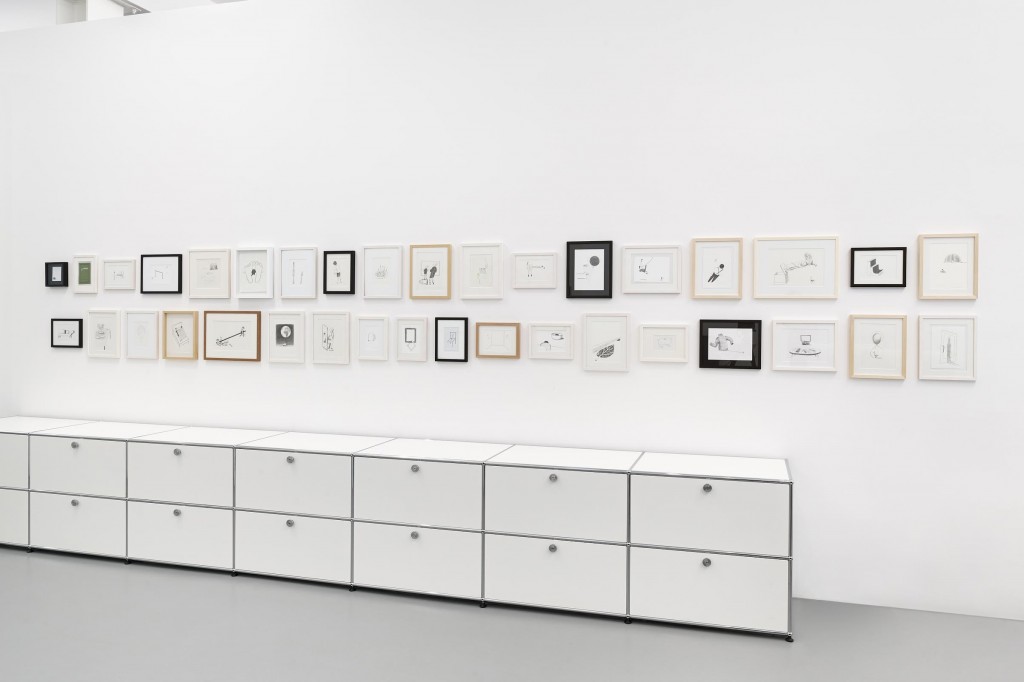 For his new exhibition, Es Gibt Nicht Gutes [There Is Not Good], artist Christoph Niemann has taken an incisive route through Germany’s tumultuous history with its creative class during WWII through the framework of author Erich Kästner’s work.  Celebrating the 40th anniversary of Kästner’s work Es gibt nicht Gutes außer: Man tut es [There is not good unless man makes it], Niemann has collaborated with the book’s original publishers to illustrate the book’s re-released edition, with these visual vignettes comprising Galerie Max Hetzler’s exhibition bearing the abbreviated name.

For Germans, Kastner’s work, which includes children’s stories and poetry, is intimately ingrained into their culture, and his literature is so prolific that it verges on colloquialism.  However, his work comes with a laden history.  Banned under Nazi rule, targeted by SS interrogators, and blacklisted for his work throughout the war, Kästner never sought exile, and his intuitive work still managed to secure his legacy within German literature.  Here, Niemann brings as light a hand to his illustrative works of graphite on paper as Kästner brings to the German language in his writing.  Es Gibt Nicht Gutes does not seek to literally depict the words of Kästner, but rather to update and cement the author’s wit through new aesthetic interpretations. Funny, charming, and concise, Niemann’s pieces take on a surrealist tone.

For Agregatszustände [Physical State], for instance, in which the original text discusses the gradual relinquish of stubborn tendencies in writers over the years, Niemann depicts two books, one slumping over, having lost its spine.  In another work, Lebensbeschreibung einer Maniküre [Biography of a Manicure], the artist weaves a freshly manicured hand into frame while using negative space to denote the hand of the stylist. Playing with the limitations of the grid, Niemann presents a quick portrait of small, imperfect moments, a trick that Kästner also draws from. 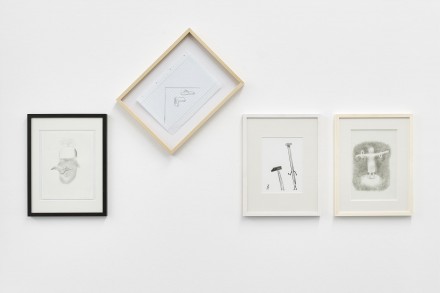 In Nietzsche, Niemann presents a soft, gray sketch of a whale from behind. Intended to not represent the famed German philosopher but rather draw from the geometric shapes found in a portrait of Nietzsche, Niemann gives both Nietzsche and Kästner’s text about the philosopher a humorous and contemplative new incarnation. 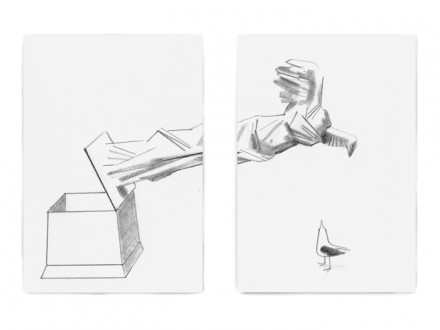 While the work is shown independently from the text that inspired it, Niemann expertly translates the jovial, imaginative work of Kästner. The preliminary quips are ultimately transformed and receive new creative license with a definitive range in execution and focus.  The result is a wide swath of textures and techniques within the larger Es Gibt Nicht Gutes collection. From gritty, rough lines to soft shading, Niemann’s collection of work provides depth and sincerity that offers a nuanced take on the writer.

Es Gibt Nicht Gutes will be on display through May 30th at Galerie Max Hetzler’s Goethestraße location and will then be traveling to Vienna, to show at the Austrian Museum for Applied and Contemporary Art. There, the collection will be displayed in conjunction with work from Kästner to celebrate the re-release of his published works.

This entry was posted on Saturday, May 30th, 2015 at 6:19 am and is filed under Art News, Featured Post, Show. You can follow any responses to this entry through the RSS 2.0 feed. You can leave a response, or trackback from your own site.