Venice – ‘Armenity’ at the Armenian Pavilion for the Venice Biennale, Through November 22nd, 2015 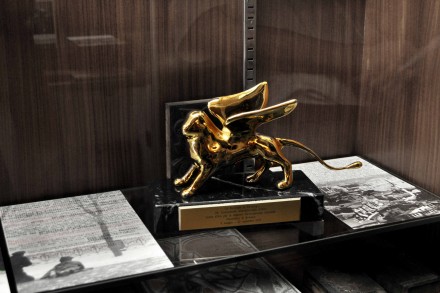 Golden Lion for Best Pavilion amongst Rene Gabri and Ayreen Anastas, When counting loses its sense (2015), via Sophie Kitching for Art Observed

In 1915, during the clashes of WWI, the Ottoman Empire set out on a path of systemic destruction of its Armenian subjects, massacring male Armenians or forcing them into conscripted labor, while leading women, children and the infirm on arduous death marches off into the Syrian desert.  The brutal and politically contentious genocide killed, on estimate, up to 1.5 million citizens, and stands as one of the Twentieth Century’s most horrific episodes of war.  Even so, the political body of Turkey still refuses to acknowledge the term genocide in relation to these war crimes, and the historical scars of the killings run through the distributed population of the Armenian diaspora worldwide. 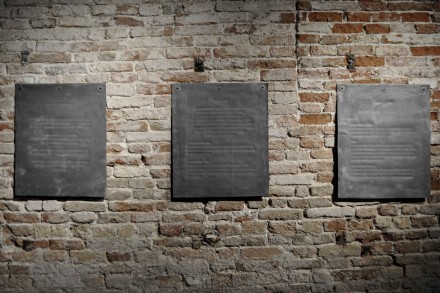 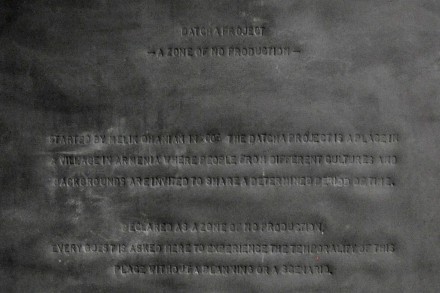 One hundred years later, the Venice Biennale is providing a space for open discussion as regards the harsh political climate surrounding the “Events of 1915″ as they have been referred to in Turkey, as the artistic institutions of the two nations seek to build a shared understanding of the crisis in the contemporary political and artistic discourse.  Working in collaboration the Turkish pavilion (located at the Arsenale) and the Armenian Pavilion (located on the Island of San Lazzaro) have launched a shared address of the situation.  This attempt at political discussion has resulted in Armenia’s Golden Lion win for Best Pavilion at this year’s Biennale, a gesture that recognizes the difficult political situations of transnational politics in the current age, and perhaps perfectly addresses the subjects of “debris” and historical/political context so emphasized by curator Okwui Enwezor. 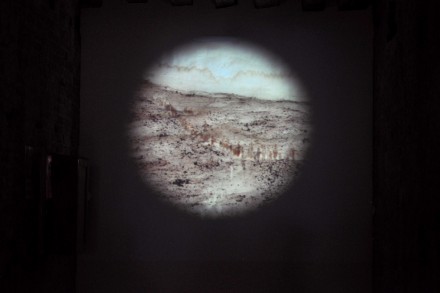 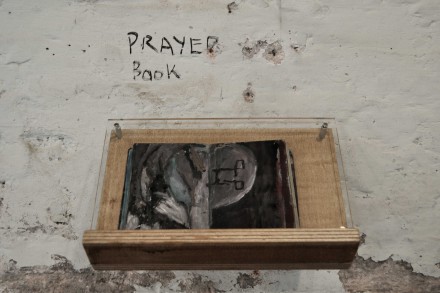 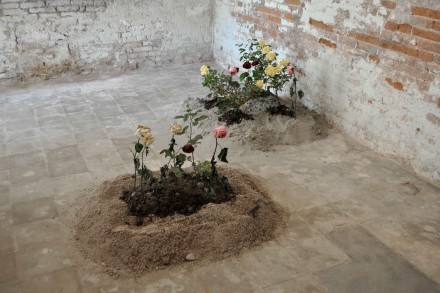 Rather than rely too heavily on any specific situation or moment of crisis stemming from the massacre or the Diaspora that followed, Swiss-Armenian curator Adeline Cuberyan von Furstenberg chose to rely on the distributed localities of her artists to inform the exploration of this historical event, emphasizing its accessibility only in traces and moments of fading memory regardless of the vast distances it has spread the Armenian people across.  In one work, husband and wife collaborators Yervant Gianikian and Angela Ricci Lucchi’s Return to Khodorciur: Armenian Diary directly presents an account of the events of 1915 through the memory of Gianikian’s father, one of the few male survivors.  In another powerful work from Aram Jibilian, the artist places the visages from Ashile Gorky portraits on his friends and family, a reference to the artist’s losses during the crisis, and his somber work after finding a new life in America. 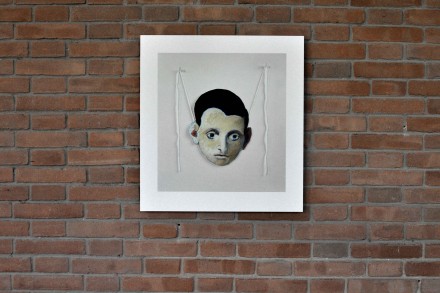 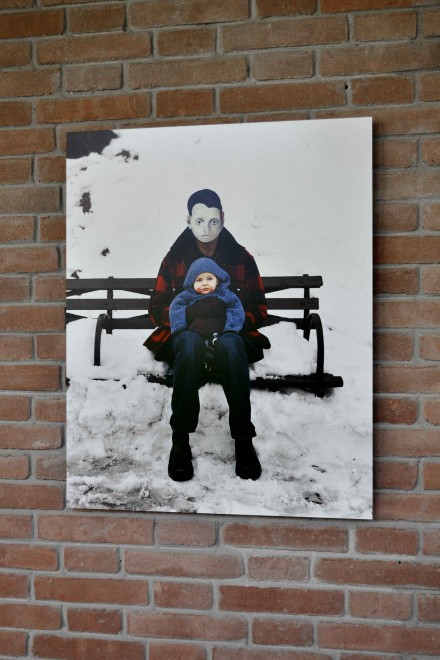 Aram Jibilian, Gorky and the son he never had (2010), via Sophie Kitching for Art Observed 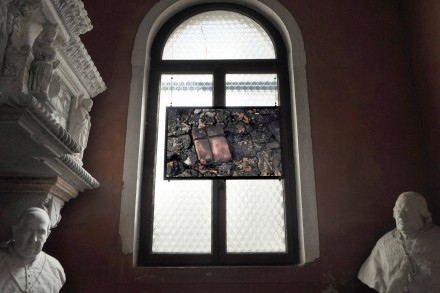 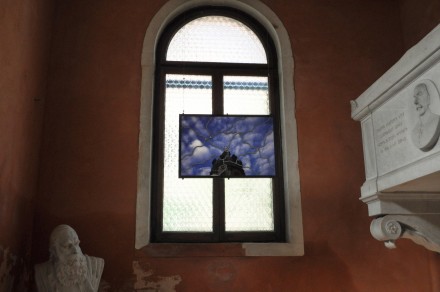 The exhibition locale, drawn back from the bustle of the rest of Venice’s countless exhibitions, also contributes strongly to its emotional impact.  Its withdrawn environs turn it almost immediately into a memorial of sorts, allowing a focused passage through the various acts of recollection, exploration and historical address, particularly considering the space’s long interaction with the history of the Armenian people.  The Monastery of San Lazzaro served as the site where Lord Byron studied the Armenian language during a stay in Venice, and where countless texts were translated into the mother tongue by its inhabitants.  Its somber air serves as a fitting backdrop of works like Anna Boghiguian’s ANI, an interior garden that presents itself like a series of funeral mounds, with flowers growing up from the ominous mounds of dirt in a gesture of healing.  Similarly, Turkish artist Sarkis (who also addresses the Armenian genocide at the Turkish Pavilion), takes the proliferation of Armenian culture at this site as a central aspect of his work, installing print racks in the space that continue the thematics of cultural proliferation. 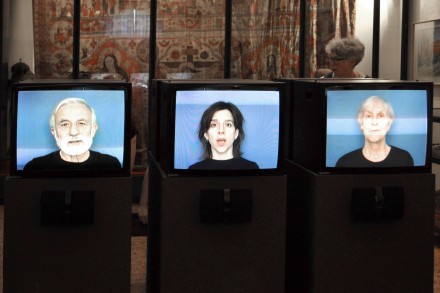 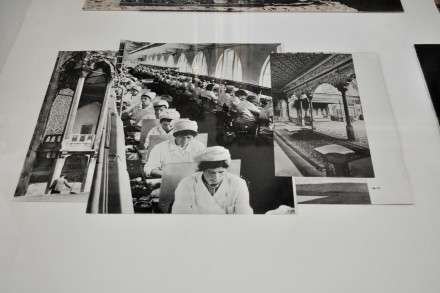 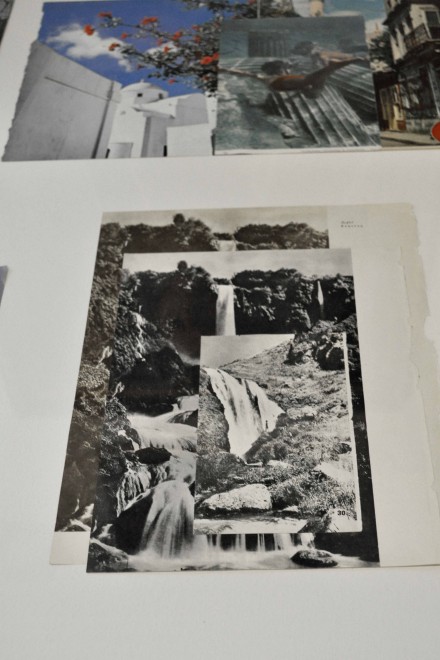 Aikaterini Gegisian, A small Guide to the Invisible Seas (2015), via Sophie Kitching for Art Observed

Given the discrete historical threads that the exhibition incorporates, Armenity manages to address the contentious landscape of the genocide in a rich, multifaceted manner that refuses to rely merely on mourning or rebirth.  Rather, Cuberyan von Furstenberg’s selections maps out an identity on the centenary of its violent fragmentation, and the subtle threads still holding them together. 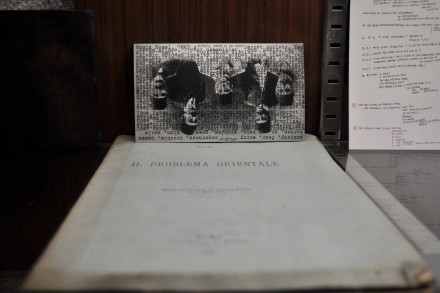 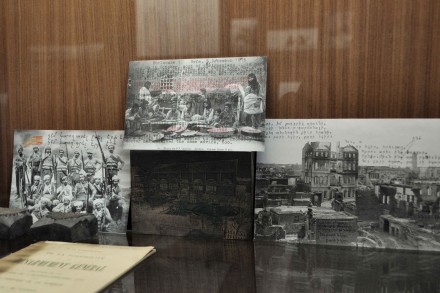 Rene Gabri and Ayreen Anastas, When counting loses its sense (2015), via Sophie Kitching for Art Observed 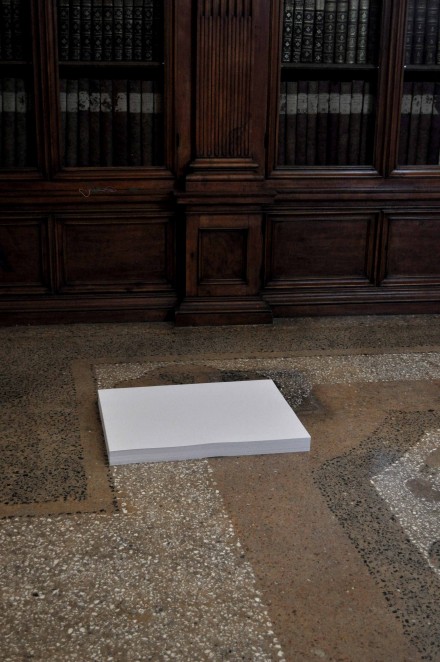 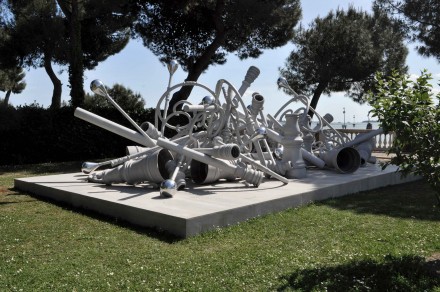 Read more:
Armenia in Venice: The past and the furious [FT]
Armenity/Hayoutioun [e-flux]

This entry was posted on Wednesday, May 13th, 2015 at 11:37 pm and is filed under Art News, Featured Post, Show. You can follow any responses to this entry through the RSS 2.0 feed. You can leave a response, or trackback from your own site.