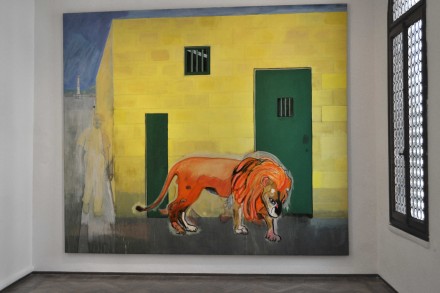 Peter Doig, Rain in the Port of Spain (White Oak) (2015), all photos by Sophie Kitching for Art Observed

Venetian Ettore Tito was one of the first stars of the Venice Biennale at its inception, presenting his work in almost every one of the early exhibitions through at 1920.  The artist’s colorful compositions often tinged with a slightly surreal, impressionist edge, were a prize of the Italian state in the early decades of the twentieth century, and often filled rooms during the first exhibitions in the city.

It’s a fitting parallel then, that the Scottish-born Peter Doig would be tapped for an exhibit at the former home of the artist, and current location of the Fondazione Bevilacqua La Masa.  Presenting a body of new works, including fourteen paintings and an additional six large-scale canvases, the exhibition’s intimate locale and rich history offers a strong parallel for Doig’s own interpretive and illusory meditations on modernity, memory and fantasy. 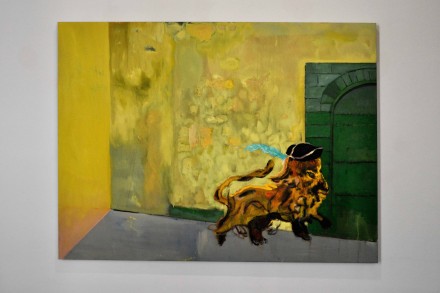 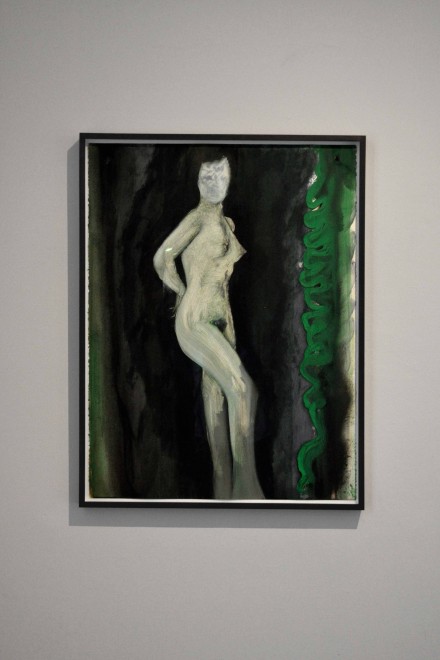 Spread out across the small rooms of the Palazetto Tito, the show is the artist’s first solo exhibition in Italy, and marks a continuation of the artist’s aesthetic interests in recent years.  Gone are the swirling flecks of color that dominated his earlier work, and some of the more obscured, blurry figurations the artist explored earlier in his career, replaced by clean lines and brusquely rendered figures.

Yet this does little to change the emotional depth in Doig’s work.  His subjects remain shrouded in a sense of mystery, and the minimal environments that surround them only serve to amplify the sense of withheld information.  Geometric forms and minimalist planes of color play off the fluid depictions of human bodies, often pushing the work towards a juxtaposition of the painterly act itself, and the subject Doig has selected.  In two works of contrasting scales, Rain in the Port of Spain (White Oak) and Young Lion, Doig fills his blocky, indeterminate landscapes with ghostly apparitions and dull clouds of paint that play against the jaggedly executed animals, still bearing traces of their initial construction ont he canvas, in the works’ foregrounds.  His scenes are eerily calm, and the animals depicted seem quite placid, despite their ferocious, ephemeral nature. Even so, a certain sense of unease permeates the work, bleeding out from the indeterminate narrative and parallel techniques of figuration. 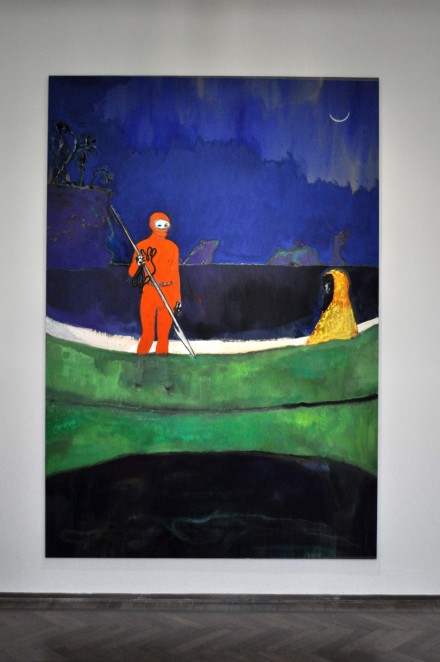 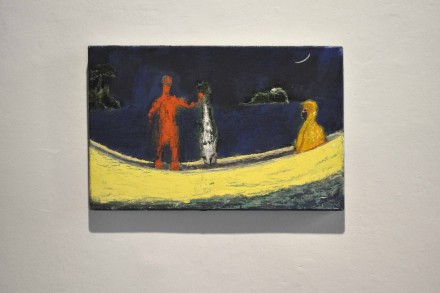 In another recent work, Spearfishing, Doig’s painterly technique allows a spare application of paint to stand in for the movements of the heavens across the night sky, as clouds develop  just above the horizon, not from direct application of paint, but from contrast with the almost stripped-bare nature of the paints above it.  Contrasted with the silent scene on the water (a peculiar iteration of Doig’s frequently used canoe), the work feels more like a gradual band of colors than an articulated scene. 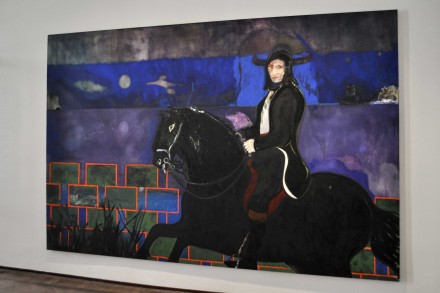 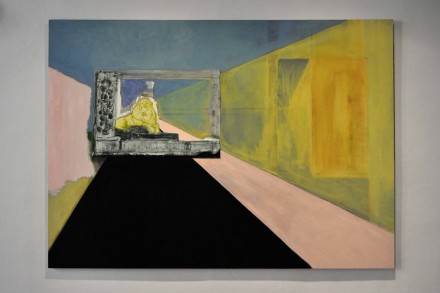 Peter Doig, Lion in the Road (2015), via Sophie Kitching for Art Observed 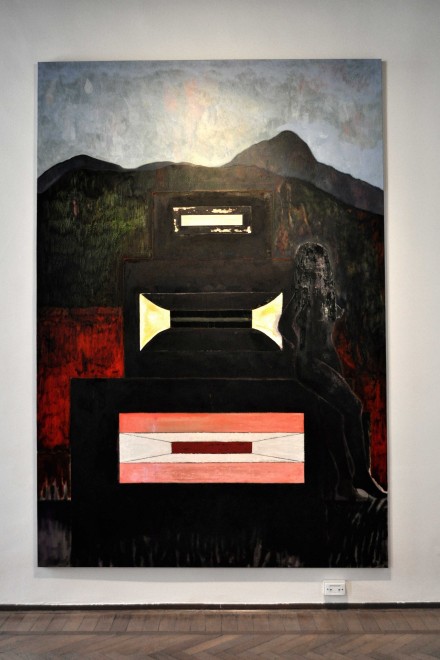 Ultimately, it’s this management of space that makes Doig’s work so elusively compelling, a utilization of the canvas that deals with the techniques of paint application as the direct mode of communication.  As the artist tweaks these minimal elements in his work, the scene itself incorporates his marks, pushing the canvases further away from the reality he depicts.

Doig’s exhibition is on view through October 4th. 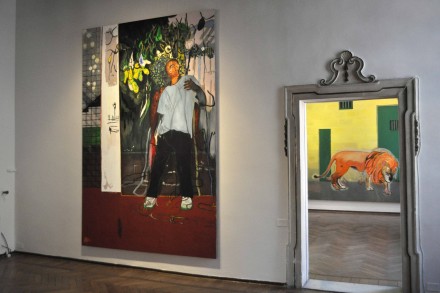 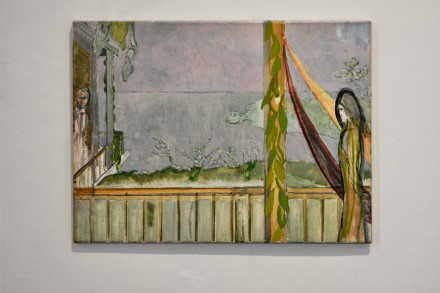 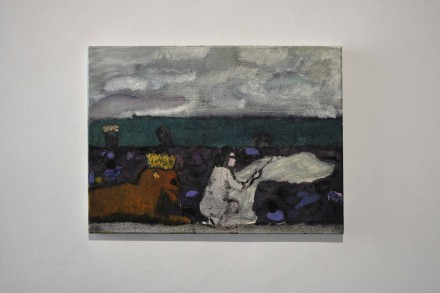 Peter Doig, Painting a cloud on a wall (2015), via Sophie Kitching for Art Observed 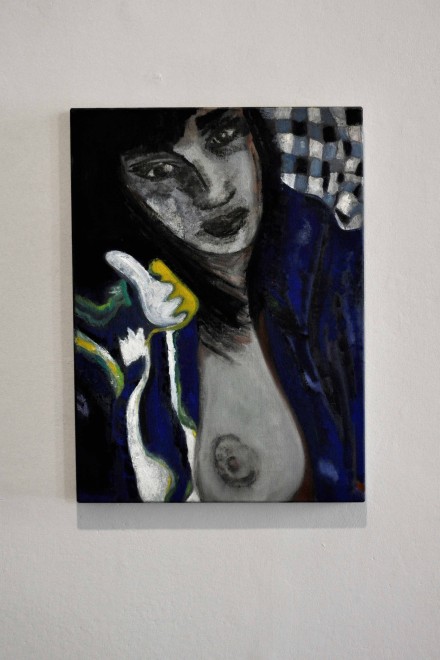 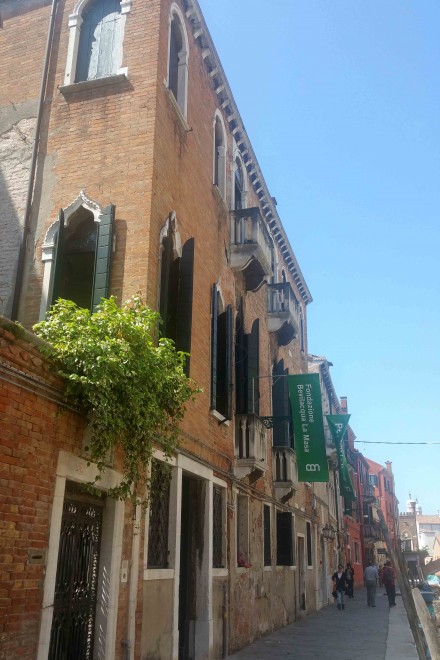 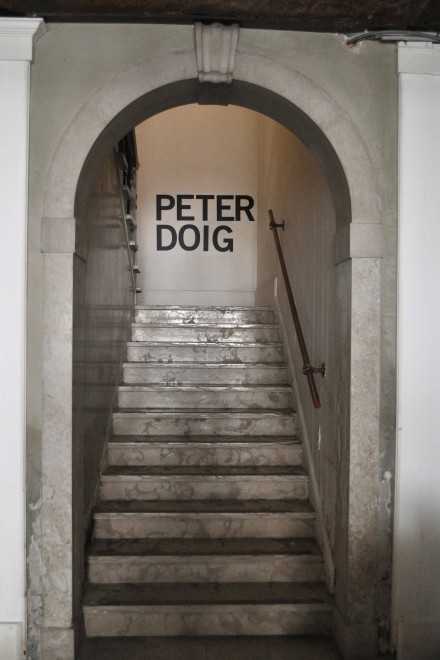 Entrance to Peter Doig’s exhibition at Fondazione Bevilacqua La Masa in the Palazzetto Tito, via Sophie Kitching for Art Observed

This entry was posted on Saturday, May 9th, 2015 at 8:49 am and is filed under Art News, Featured Post. You can follow any responses to this entry through the RSS 2.0 feed. You can leave a response, or trackback from your own site.