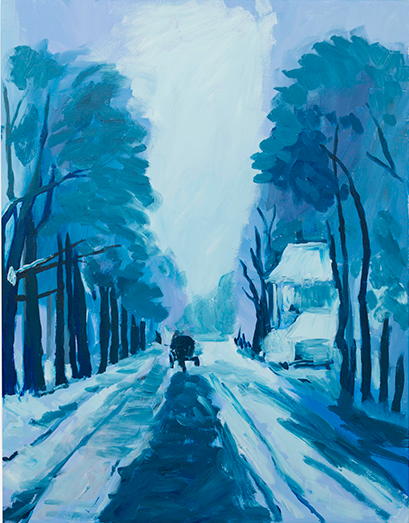 Artist Karen Kilimnik returns to Sprüth Magers this month, showcasing her small-scale, painted appropriations, mixed with the influence of traditional Delftware.  Kilimnik’s work focuses on expressing her own views of openness and precision, elegance and humor through a variety of mediums, often creating site-specific projects that mimic 19th Century interiors and often incorporating the design and fashion of the era.  Her small paintings overlay found imagery with new landscapes and imagined scenarios, reinforcing the atmospheric effects of the painterly surface while maintaining the scale and shape of the landscape and her palette. 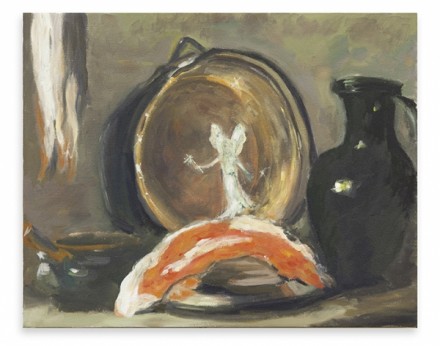 Kilimnik’s passion for  history allows for her to further explore different historical moments and borrowed imagery.  She is fascinated with castles, heraldry and art history and has visited historical sites to create her own renditions.  From historical tapestries to her interior works, Kilimnik’s paintings exhibit her own enjoyment with these landscapes and their significance in time.  Here, she brings a palpable sense of humor and wit to her London gallery show, and notes the spark of inspiration when encountered with the Fairy brand dish soap.  She humorously used this in order to create her painting, The Fairy Cleaning the Copper Pot with Fairy Dish Soap, a painting which, like many of her works, illustrates her own appropriations and journey through painting based on what she observes and appreciates in varying landscapes, whether commercial, fantastic or mundane.  Her contextual pairings allow a merging of these themes with both historical artifacts and architecture, underscoring the action of history through objects while always remaining playful and imaginative with its mixture of the past and present. 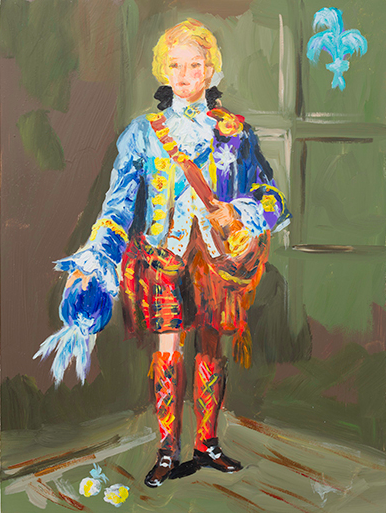 Karen Kilimnik, The Fop In Scotland (2015) Via Sprüth Magers

Her depiction of royal figures are one of the core characters of her work.  She illustrates high class figures with illuminating light and vibrant color, allowing her figures to pop out from dulled backgrounds and ancient landscapes.  Her paintings are expressive in nature with thick painterly marks and gestures, often playing on the traditions of portraiture as much as the imagery itself.  Avoiding or rather, foregoing precise painterly details, Kilimnik’s paintings reveal glossy scenes with an impressive degree of expression and movement. 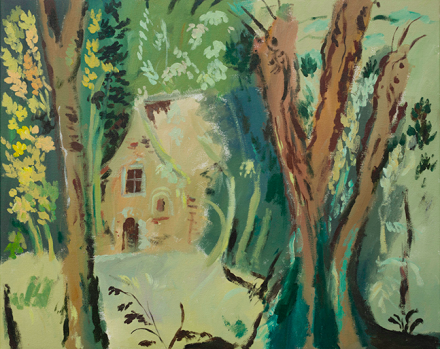 On this, her third solo show at this gallery in less than ten years, Kilimnik’s work shows its development from historical installations to witty classical landscapes playing on the scenes of the past.  Her contextualization and research makes her interpretation of history uniquem and allows for viewers to engage with the past through a cunningly altered present.

Kilimnik’s exhibition is on view through June  20th. 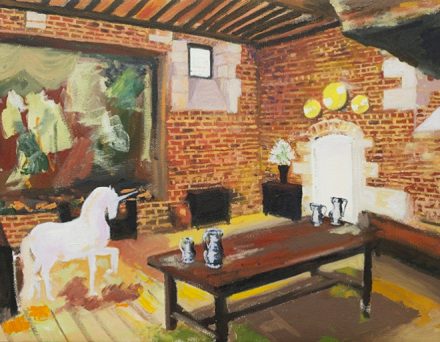 This entry was posted on Sunday, June 14th, 2015 at 12:00 am and is filed under Art News, Featured Post, Show. You can follow any responses to this entry through the RSS 2.0 feed. You can leave a response, or trackback from your own site.