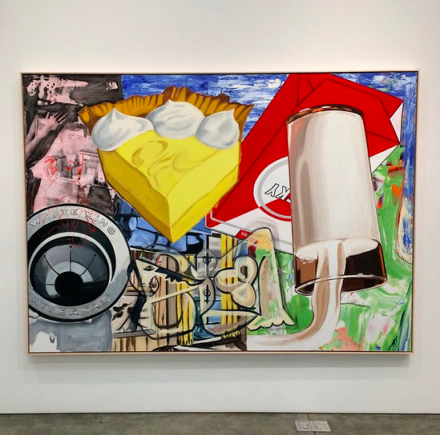 Painter David Salle is currently presenting a new body of work at Skarstedt’s Chelsea outpost, returning to his previous Product Paintings series in a set of vividly rendered prints and paintings that seem to address not only the artwork as object and commodity, but also that relation to the Post-War canon. 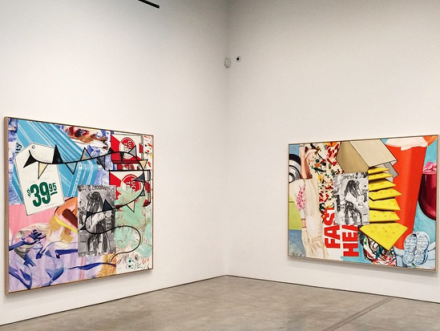 The work on view draws its background from two of the artist’s past series of work, his Silver Paintings, which are made from a 1992 photo shoot the artist ran with performer Massimo Audiello, who posed in front of the other series of works that inspired Salle’s work on view, his Early Product Paintings. Accordingly, the exhibition of the pair of canvas sets here feels like an exercise in cyclical history, a presentation of the photographic event as a catalyst for both the creation of wholly new works, as well as revisitation of the old. 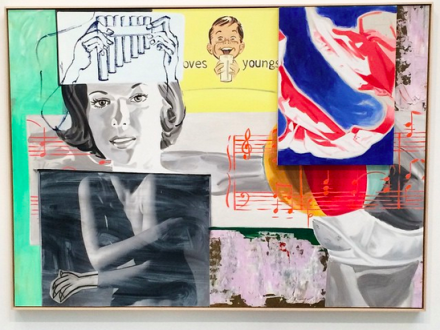 Much like Salle’s earlier Product works, the Late Product Paintings are almost packed to bursting with the formats of modernity, yet rather than push that logic of excess to its natural conclusion, the pieces on view seem more interested in the human aspects often left tacit in the pop art discourse.  The solemn faces and ominous positions of Audiello bring a dark subtext to the works, as if a human voice were clawing to extract itself from the greasy, fatty landscapes of American fast-food.  It’s an interesting continuation of Salle’s practice, one that has long remained interested and engaged with the use and proliferation of the image as an end in itself. Here, Salle turns his own production back in on itself multiple times, reusing not only the images shot of his subject, but also the frenetic mode of product paintings themselves, a series of canvases that have their own immediate historical context (the frenetic explosions of James Rosenquist’s work as well as some of Tom Wesselman’s more surreal compositions immediately come to mind). Fittingly enough, Salle even adds in blatant nods to a number of Post-War giants. In several works, the distended, horrifying cubism of Picasso’s Guernica are laid over the product-driven surfaces, while in another, he attaches a fairly convincing approximation of a de Kooning canvas directly over his larger canvas. 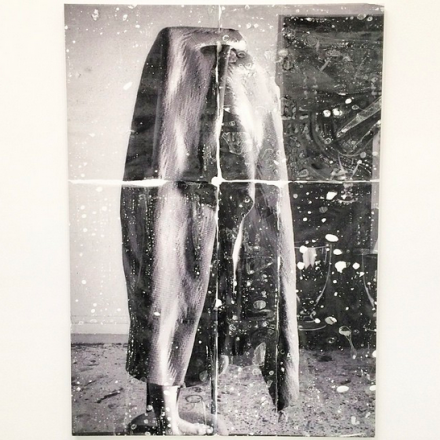 Salle seems interested here in the currency of the image itself, not merely in a singular discourse or body of practice/history, but rather how each respective image functions in the relations of 21st Century Capitalism. In a culture where the act of creativity has been trumpeted as a tool for “urban renewal” and the speculative machinations both within the art market itself and outside it, Salle seems to possess a strong perspective on the interrelation of these visual linguistics.  When considered alongside the artist’s own enigmatic treatment of his own body of work, and its relation to a singular, linear history, the works offer an impressive depth of interpretation for the intrepid viewer.

Late Product Paintings is on view through June 27th. 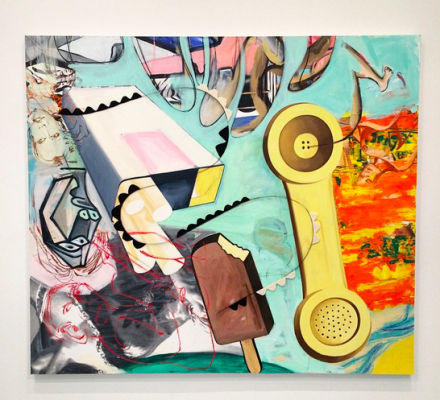 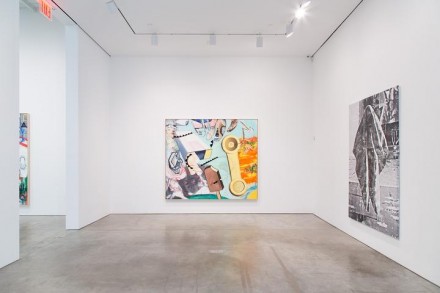 Read more:
David Salle: New Paintings [Skarstedt]
“It’s Not Nice to Kick the Dead, But in This One Case I Don’t Really Care:” An Hour with David Salle [Art News]

This entry was posted on Tuesday, June 23rd, 2015 at 12:00 am and is filed under Art News, Featured Post, Show. You can follow any responses to this entry through the RSS 2.0 feed. You can leave a response, or trackback from your own site.