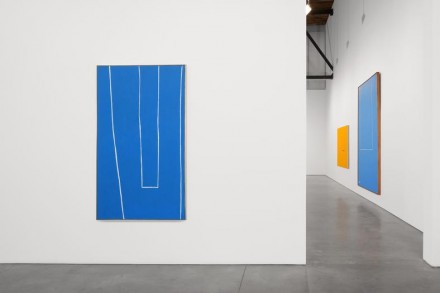 Now through June 20, Andrea Rosen Gallery will host a comprehensive exhibition of Robert Motherwell’s Open series, composed from 1967 through the 1970s, and set to coincide with the centennial of the artist’s birth.  This historical marker exemplifies the gallery’s ongoing commitment to looking to the recent past of contemporary art in order to expand upon trends currently emerging, and to trace the influence of major figures in the art world.  As the gallery’s press release states, “Opens not only allows us to compare these masterworks against the present-day focus on abstraction, but also encourages us to reconcile the breadth of Motherwell’s rigor and clarity.”  This comprehensive exhibition of one of the artist’s lesser-known series provides the opportunity to deepen public understanding of the legacy of Motherwell as an artist and a significant force in mid-twentieth century New York City. 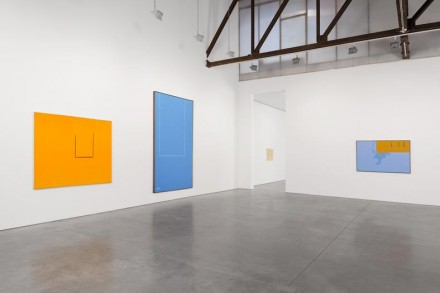 The pieces included in this series were typically composed as single-color surfaces, over which Motherwell painted three charcoal lines or other simple, geometric forms.  The rectangular forms and fragments traced onto these brightly colored canvasses expose Motherwell’s ties to Minimalism, yet are also evocative of the artist’s engagement with the more intellectual dimensions of art making, as it suggests a concern with themes of interior and exterior space, as well as shades of inclusion and clarity in the abstract. This series, as well as the increase in public and institutional attention this artist has recently received illustrate how Motherwell’s scholarship, teaching, and more cerebral approach to painting were also incredibly aesthetically productive. 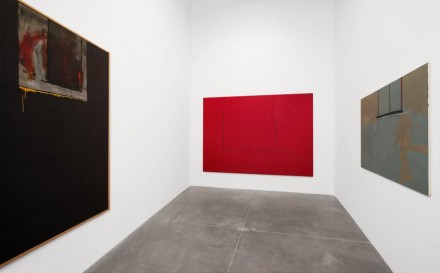 The works in this exhibition reflect the same profound intensity of Motherwell’s better-known pieces, such as Elegy to the Spanish Republic (1961), perhaps his most famous single painting.  The significance of his vision and voice in the development of avant-garde art in America is reiterated here, yet this time the artist’s historical position harbors very little nostalgia.   Instead, this exhibition proposes the possibility that an artist’s career can continue to expand beyond his legacy and the expectations of the public.  Opens, in this sense, represents both a return and a novelty. The boldness of this series proves that, despite the passage of time, the images and concepts produced by Motherwell will continue to work and engage with the contemporary. 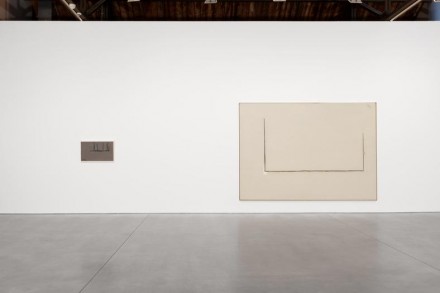 Born in 1915 in Washington, Motherwell had his first solo exhibition in 1944 after he was encouraged to devote himself exclusively to painting rather than academics. While producing artwork, however, he continued to lecture and teach extensively throughout his career. By the mid-1940s, Motherwell had become a major figure of the American avant-garde, and exhibited internationally and across Europe in the following years.  In 1965, a major retrospective of Motherwell’s work was held at the Museum of Modern Art, New York. The recognition and acclaim this artist enjoyed while alive is reanimated in this exhibition and in the multiple studies and exhibitions devoted to Motherwell that have taken place over the past five years.

The exhibition concludes on June 20th.

This entry was posted on Monday, June 15th, 2015 at 12:00 am and is filed under Art News, Featured Post, Show. You can follow any responses to this entry through the RSS 2.0 feed. You can leave a response, or trackback from your own site.