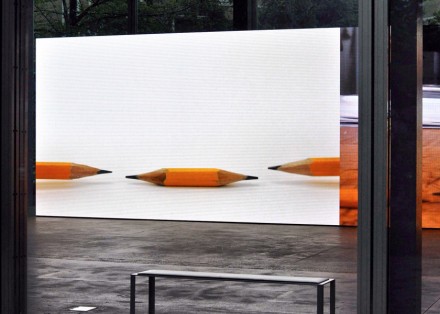 Bruce Nauman presented a major solo exhibition at the Fondation Cartier pour l’art contemporain in Paris, his first in France in the last 15 years. Imagined for the bright and airy building designed by French architect Jean Nouvel, the show features a selection of large-scale works, exploring the complex relationship between time, body, voice and surroundings.

The highly influential American-born artist established his studio in New Mexico in the late 1970s. The experience of his workspace has been a subject matter for a number of his works ranging from installation, performance, video, sound and sculpture. The broad array of media in Nauman’s œuvre is masterfully presented in this exhibition which brings in resonance iconic works from the 70s, 80s and 90s along with very recent productions, in an ongoing dialogue between reality and its representation, performance and its documentation, repetition and memory. 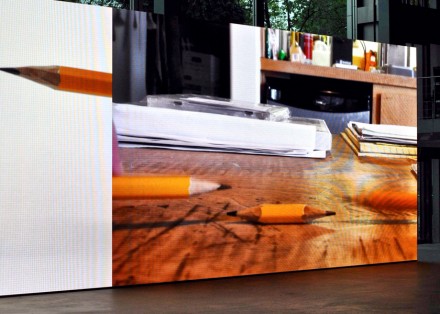 The monumental video piece Pencil lift / Mr. Rogers (2013) consists of a 46 feet long LED screen split in two. Each part of the diptych features a similar action of lifting a pencil in-between two other pencils. One video is shot on a white abstracted background, focusing the attention on the ephemerality of balance. The second is shot from Bruce Nauman’s personal desk surrounded by his everyday objects and his cat, Mr. Rogers, who occasionally enters into the frame, enhancing a sense of commonplace and proximity. The scale of the projection however shifts this tedious act into a continuous sculptural gesture. The visual and temporal repetition conveys a contemplative dimension, thus drawing awareness to the neglected space between objects and actions. 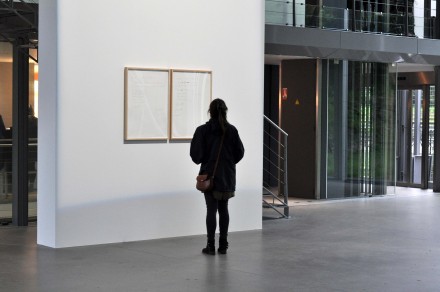 A less tangible series of works is also presented on the ground floor, both indoor and outdoor. The sound piece For Children / Pour les enfants (2015) fills the empty space of the second room with these words spoken in a loop in both French and English. The lack of context and objects invites to a more complex understanding of these very words. In this installation, language tends to build its own plasticity over time. The longer you stay, the longer the sequence of identical expressions you hear. Progressively the same three words start performing different meanings, to the point where the invitation contained in the title “for” / “pour” and the playfulness linked to childhood fade away and transmit a sense of discipline and distanciation. 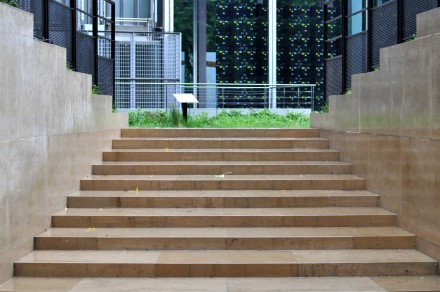 Alternatively, the work For Beginners (Instructed Piano) (2010) presented in the garden of the Fondation carries a feeling of intimacy. The sound piece is inspired by a score by Béla Bartòk written specifically For Children ’s hands and is interpreted by musician Terry Allen following instructions by Bruce Nauman. This composition of notes and words gradually dissolves in the surrounding vegetation, as a subtle reminiscence of philosopher Ludwig Wittgenstein: “Uttering a word is like striking a note on the keyboard of imagination” (Philosophical Investigations (1953)). 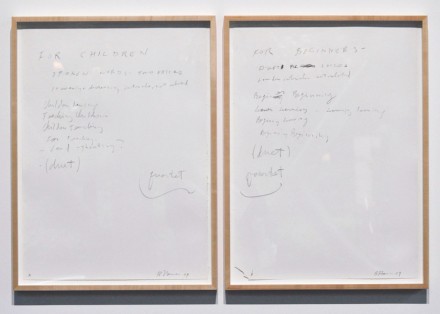 Bruce Nauman, For Children / For Beginners (2009), via Sophie Kitching for Art Observed

The work on paper For Children / For Beginners (2009), which can be viewed as the third part of this triptych, reveals Bruce Nauman’s creative process. The two scores are composed of multiple transcriptions which seem to allow a certain interchangeability of terms: “beginner beginning“; “beginning beginning“; “learning learning“. The artist experiments here empirically with language as a paradoxical entity, carrying multiple meanings at once as well as bearing its own autonomy as an object in itself. This work questions the boundaries of language as an intelligible system as in Wittgenstein’s “language games“. 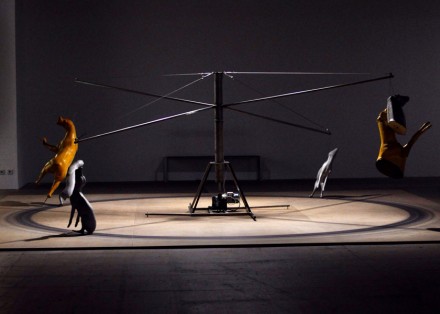 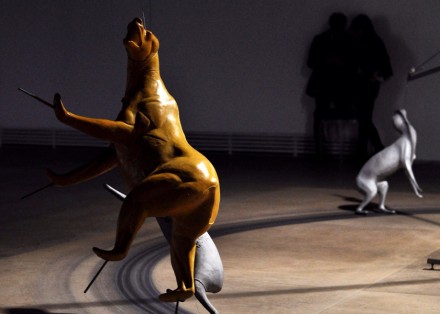 In the lower level, two emblematic works are presented together Carousel (Stainless Steel Version) (1988) and Anthro/Socio (Rinde Facing Camera) (1991). In the context of the show they stand as archival masterpieces while engaging a striking dialogue with our immediate present.

In Carousel (Stainless Steel Version) (1988), animal figures (coyotes, deer, lynx) hang from their neck to a metal structure, which pulls them around and around, their feet scratching the floor in a daunting circle and a “scream“ similar to chalk on a blackboard. These taxidermy molds seem to refer both to dead bodies and children’s stuffed animals. The ongoing movement is regular and fairly slow, emphasizing the feeling of anxiety and discomfort carried by its lifeless components. More than a kinesthetic sculpture, this piece recalls an abandoned theatrical stage or a circus merry-go-round, searching for our inner troubled visions. 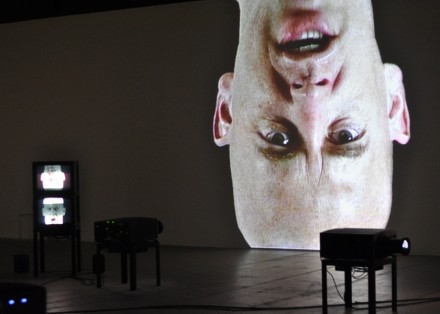 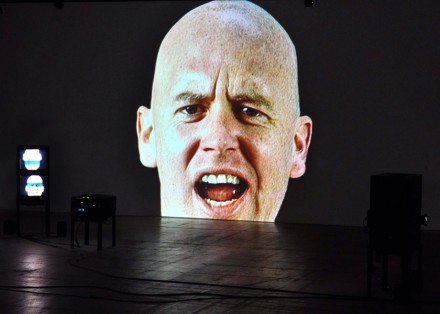 The multi-channel video and sound installation Anthro/Socio (Rinde Facing Camera) (1991) creates a vibrant rupture with the rest of the exhibition. Composed of 3 large-scale video projections and 6 color monitors stacked in pairs, this proteiform piece stages a sole performer, Rinde Eckert, singing in full volume the words “Feed Me, Eat Me, Anthropology“; “Help me, Hurt Me, Sociology“; “Feed me, Help Me, Eat Me, Hurt Me“. The screens continuously play the same videos in loops, with Rinde’s head either facing us or projected upside down, indeed testing one’s irritation limits. The overall tension is also conveyed by the layout of the piece : the viewer walks amongst all the electrical cables, surrounded by the demultiplied headshots and overlapping voices as in a 360° “one-man choir“. This work is similar to an experienceable space which reaches contradictory areas of the mind such as hope, fear, frustration, and fascination. 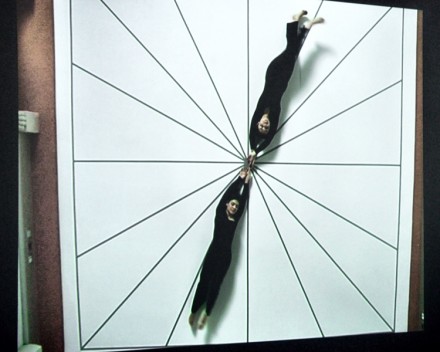 In the last room, the reactivation of the work ‘Untitled’ (1970/2009) appears like a soothing experience after such intelligible cacophony. The installation is composed of two perpendicular video projections of the same image: two performers are lying on a dancing mat printed with a clock dial. Their arms and legs are stretched, their hands meet in the center of the mat, and their bodies twirl in circles, until exhaustion. The juxtaposition of the temporal diagram onto the performers seem to cancel their physicality: they become time measuring instruments and the duplicated mirror projection, vertical and horizontal, shifts our perception of space and gravity. 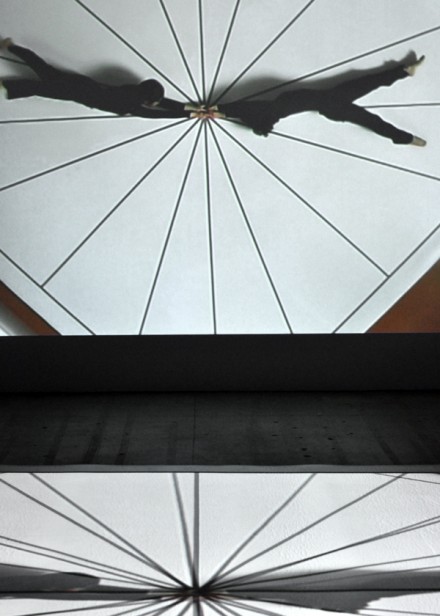 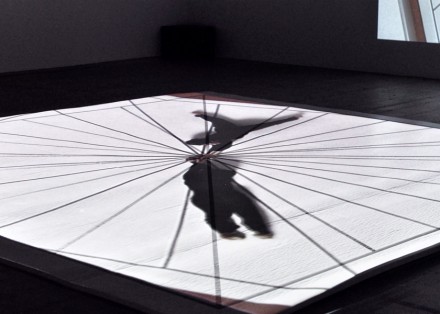 This series of mesmerising works and the empty spaces separating them enable the viewer to think and to feel through his senses notions of presence and absence. The recurring concept of repetition is approached here as a means to reflect on the passing time and our relation to our surroundings. In this exhibition, Bruce Nauman indeed continues his study of human behaviors through the materiality of image, word and movement; “approaching the world with logic, displine and confidence, when the truth is, it’s chaos“ (Robert Storr, interviewed by Grazia Quaroni at the Fondation Cartier (2015)). 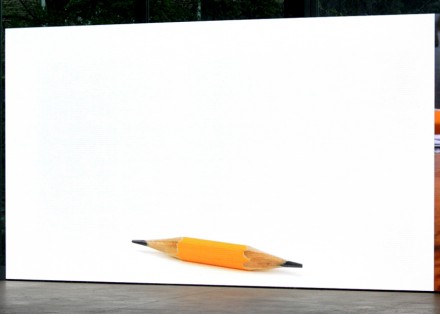 This entry was posted on Thursday, June 25th, 2015 at 9:05 am and is filed under Art News, Featured Post, Show. You can follow any responses to this entry through the RSS 2.0 feed. You can leave a response, or trackback from your own site.