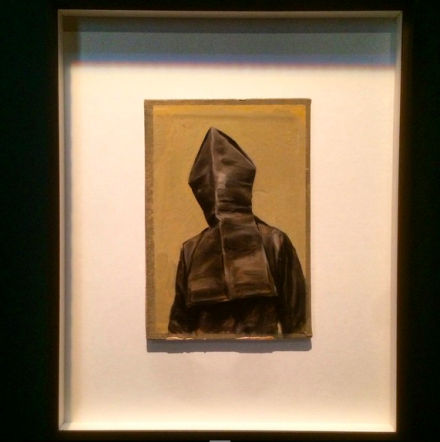 Belgian painter Michael Borremans has long mined the aesthetic moorings of antiquity for his work, creating meticulously labored paintings that owe much to 17th and 18th century painterly technique.  Originally trained as a photographer, Borremans’s craft is tempered by a notable scholarly, contextual awareness, frequently using his mooring in the present day to offer the occasional critique or inversion of his historical inspirations.  Such is the case with the artist’s most recent body of work at David Zwirner’s 24 Grafton Street gallery in London, a series of dark, occasionally disturbing pieces that use the painter’s signature style to amplify their surrealist aspects. 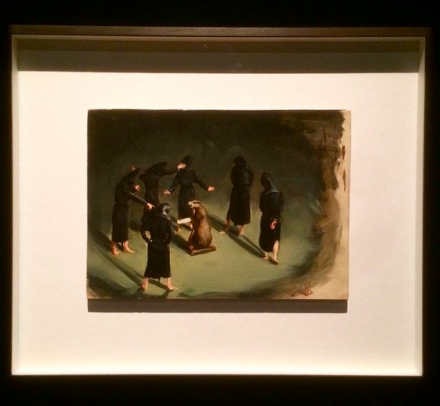 The exhibition focuses almost exclusively on a single format, portraiture and tableaus of black-hooded figures Borremans has painted in a variety of poses, scenes and situations.  Buried underneath folds of cloth, these figures carry a striking number of cultural associations, from the sanitary robes of doctors treating Black Plague (his show title seems to play on this notion of death and decay), to the violated bodies of the Abu Ghraib scandal, to a vague sense of the occult.  Compounding these touchstones, Borremans fits his figures into relaxed stances, vibrant clusters of dancing bodies, and violent scenes, often using the open timeframes his figures conjure to let deep-seated, and often horrifying human histories to float to the surface. 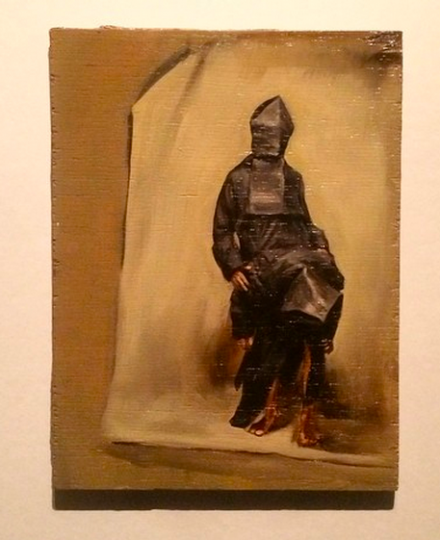 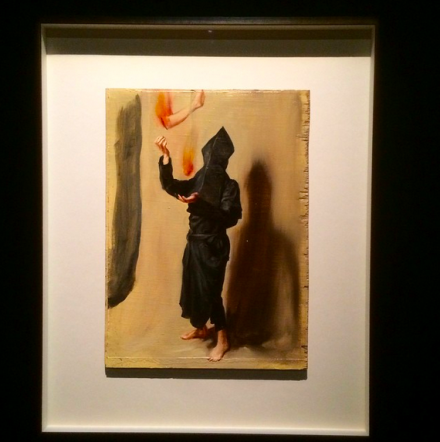 However, an overly dark reading is often countered by the artist’s personal aesthetic choices, placing his figures in comical, bizarre or even overtly staid gestural movements.  In one, what appears to be a hooded child raises its hands while another, larger figure stands over it, mixing a sense of childlike innocence with the dark tone of the robes covering the human form.  In others, the posing and gestures captured seem to hint at a certain gallows humor, particularly in Juggling with Fiery Limbs II, a picture of one figure doing just that: tossing a series of flaming limbs into the air.  In another, a group of figures point and pace around a large stuffed badger.  No information is offered to clarify the scene outside of the body language of his characters, and occasionally a prop or two. 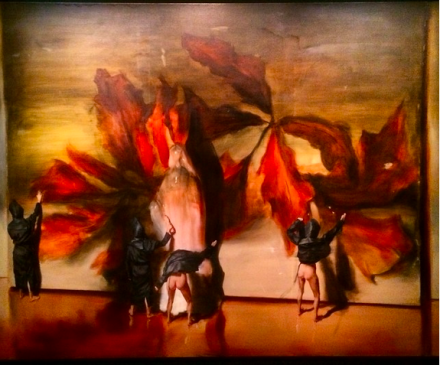 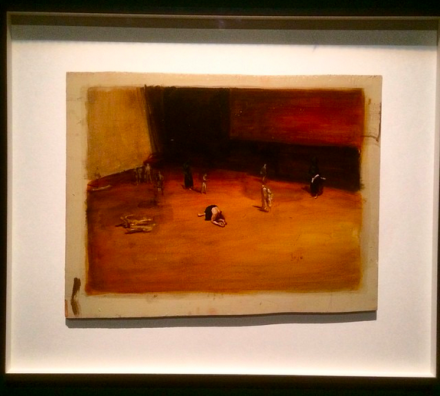 This sense of the body alone seems to be the artist’s express goal here, as if both hyper-loading the figure itself with ominous meanings and removing any explication of context opens the work to a study of a human’s expressive capacities beyond concrete language or facial expression.  Borremans has created a series of works here where the movements and gesticulations of his figures sit center stage, explored through the movements of hands, feet, and the occasional rear end.  Almost by proxy, his attention to detail becomes similarly foregrounded.  Combining a dark, surrealist wit with his impeccably executed technique, the exhibition traces a line of inquiry on both painting and the human form intertwined with humanity’s often dark history.

Black Mould is on view through August 14th. 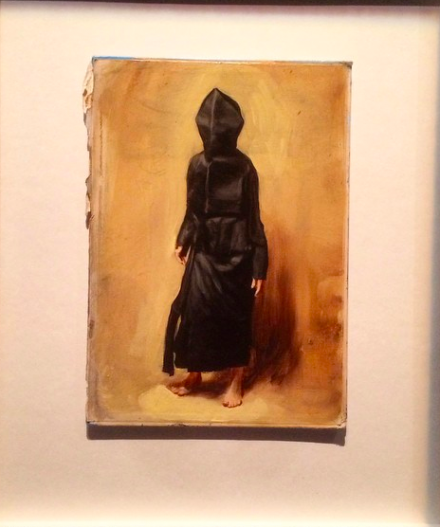 This entry was posted on Sunday, July 19th, 2015 at 12:00 am and is filed under Art News, Featured Post, Show. You can follow any responses to this entry through the RSS 2.0 feed. You can leave a response, or trackback from your own site.