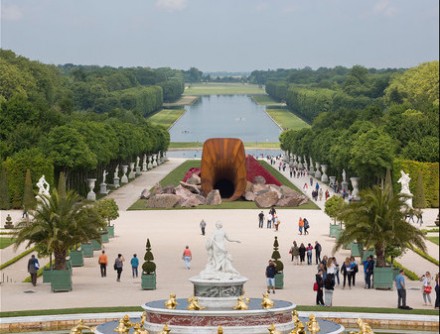 Continuing its series of summer commissions meant to encourage contemporary arts in engagement with the history of its vaunted grounds, the Palace at Versailles has opened its new summer show featuring the work of Anish Kapoor, spread across the lawns and gardens of the iconic French landmark.  Kapoor, often lauded for his ability to blend both historical and physical contexts into its final execution, has taken the challenge in stride, executing a number of powerfully dissonant sculptural works and installations that keep French history at a short arm’s length, while never shying away from his own brand of phenomenological playfulness.

The works on view run the gamut of Kapoor’s practice, from a series of his immediately recognizable mirror works, shifting the viewer’s position and relation of space (one placed on the steps of the palace flips the viewer upside down as they approach), to his now immediately recognizable Shooting into the Corner installation, with a cannon blasting red wax into a gradually coated over wall (here taking on the bloody history of the monarchy, and placed adjacent to a number of historical busts, sculptures and paintings inside the space.  In another work, Descension, Kapoor creates a swirling vortex of blackened water at the foot of one of the grounds’ reflecting pools, an ominous note again harkening back to the political turbulence of post-Renaissance France, and the stability and wealth Louis XIV meant to signify by Versailles’ construction.

Yet the exhibition has been dominated by discussion of the artist’s sculpture Dirty Corner, a gaping, steel maw patina’d with rust that the artist describes as “the vagina of a queen taking power.”  Perhaps a little heavy-handed, the description, and its jarring presence facing the palace facade has already caused an uproar among critics, the French press, and even local residents, who have decried the work as vulgar.  What’s more, the work has since been splattered with yellow paint, an attempt to destroy its facade and force its removal from the museum grounds.

As the vandalization of Dirty Corner shows, the French can be particularly sensitive about their history, especially surrounding the iconography of the aristocracy ridden out of power during the French Revolution and the bloody years of struggle afterwards.  Kapoor seems to understand this point of conflict, noting in an editorial for The Guardian that his act is in fact meant as a disruptive one, upsetting the geometric lines of the site, but his work here is as much one of historical rupture, bringing the vested power and repression of Versailles’ historical moorings (not to mention the packed cells of the Bastille during the reign of Louis XVI) back to the surface of a relatively tame and ambivalent contemporary venue.  That this sudden reflection on the violent French monarchy would rile its descendants so strongly is only a testament to its effectiveness.

Kapoor’s installation is on view through November 1st.

This entry was posted on Friday, July 3rd, 2015 at 12:00 am and is filed under Art News. You can follow any responses to this entry through the RSS 2.0 feed. You can leave a response, or trackback from your own site.