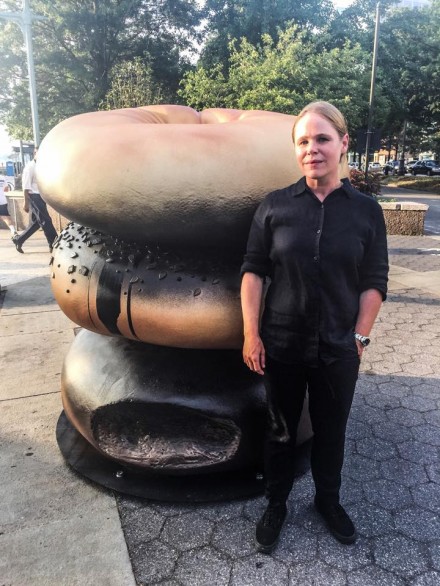 At both Ruth Wittenberg Plaza and Hudson River Park, clusters of massive bagels have touched down, part of artist Hanna Liden’s new commission for the Art Production Fund.  Amplifying her previous interests in the possibilities for discarded material and consumer objects as raw sculptural material, Liden turns the ringed breakfast staple into a sudden intrusion on the New York landscape. 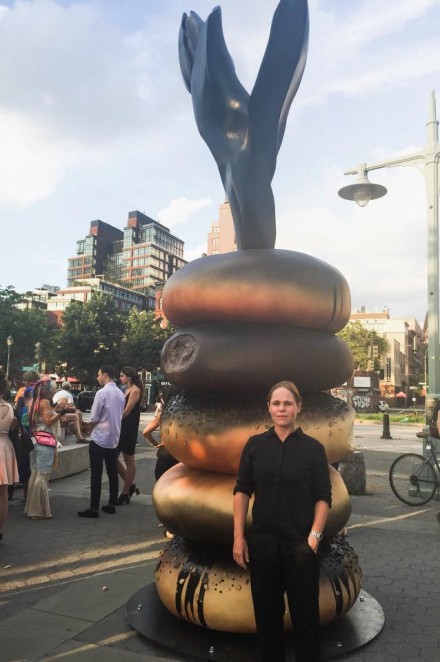 Carved meticulously by a team of artists, the bagels are spread across the two separate locations, offering a sudden encounter with passerby that often sees viewers pacing around the towering works (blossoming with equally large plant stems) and errant pieces spread across the park and square.  Presenting a certain comic flair common to much of Liden’s practice, the work marks a tight presentation of the artist’s aesthetic project on a public scale.

The works also mark a continuation of Liden’s interest in vases, containers and street detritus.  Previous photographic and sculptural works by the artist had seen flowers sprouting from the inside of black plastic bags, Yankees baseball caps, and even half-filled bottles of Gatorade. There’s something explicitly New York about Liden’s sculptures, a tinge of humor that seems familiar to residents of the Big Apple in their snarky appropriation of the urban landscape.  With Everything, Liden doubles down on that sensation, presenting her unique style writ large against the architecture of the city, almost as if the work served as a totem to one of the city’s favorite foods. 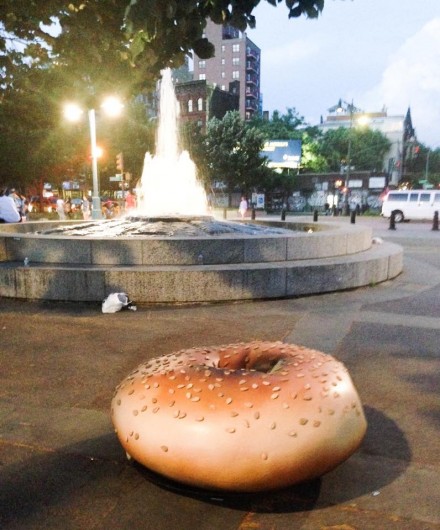 Yet there’s something ominous about Liden’s bagels as well, with their black spray painted surfaces occasionally leaking down from ring to ring of the impressively stacked sculptures, as if the bagels were stained with the grit and grime of New York street life.  Rather than triggering a sudden hunger pang, the works seem to emphasize their own inedibility, or rather, their role as a New York dietary icon that seems increasingly difficult to find downtown.

Hanna Liden’s Everything will remain on view through August 24th in Ruth Wittenberg, and through October 20th in Hudson River Park.

This entry was posted on Wednesday, August 5th, 2015 at 12:00 am and is filed under Art News, Featured Post, Show. You can follow any responses to this entry through the RSS 2.0 feed. You can leave a response, or trackback from your own site.