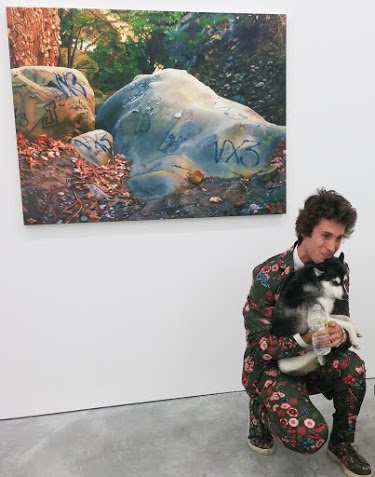 Jack Greer with One of His Works, all photos via Art Observed

Artist Jack Greer takes to Howard St Gallery this summer to present his solo exhibition, Landmark, continuing his affiliation with The Still House Group at the collective’s downtown space. Producing individual work amongst an ensemble of young artists–who chiefly provide for one another what is essentially a creative support group– has undoubtedly influenced Greer’s work; Landmark explores the relationship of the individual vis-à-vis the conglomerate, exposing the inherent desire of humans for enduring fellowship. 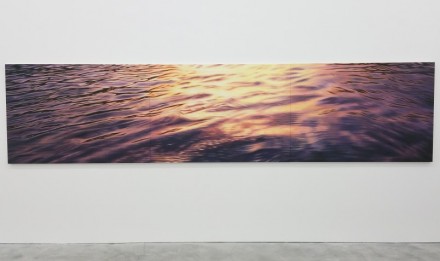 A native Californian, Greer has taken note of the tendency of Santa Monica’s gang members to wander so far as the mountain trails above the city, where they persist in the delineation of their communal territory through the application of specialized graffiti tags. Individual signatures are continually applied over an agglomeration of antecedents, forming a lexicon of a particular group’s presence that is palpable to all, but apparently truly decipherable only by those directly involved in the dialogue at hand.

The attention to detail and compassion which, in all likelihood, first led the artist to analyze the oft-unqualified phenomenon of tagging, are expressly reflected in his work. Through a series of meticulously crafted ink pointillism drawings, as well as one hyperrealistic oil painting he entitles, Family Portrait, Greer documents the enigmatic, scrawled markings and their remarkably contradictory natural surroundings with a fantastic degree of technical prowess. His extended cogitation upon the purposeful human indexes, ultimately achieved through a respectful lending-of-ear to the voices of multitudes of these once-present individuals, makes apparent their common signifier: a desire for a collective occupancy which transcends time and place.

Continuing his exploration of assemblages and their human indexes, Greer’s work absconds to the Seine River in Paris, a context he establishes through the representation of its waters ablaze under a setting sun in yet another gleaming, large-scale, photo-realistic oil painting. A series of fondly-framed black and white snapshots which thoughtfully zoom-in on the details of nearby trees line the opposite wall. Each of the trunks is adorned with a carved inscription, presumably by a distinct, since-departed individual, substantiating the universal impulse to conquer ephemerality through concrete markings. 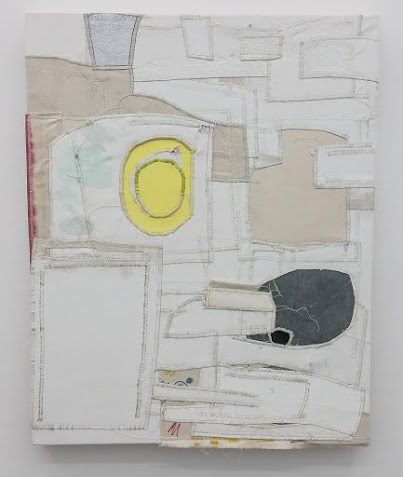 A series of collages, tenderly sewn together from swatches of canvas sweepings and subsequently personified through their titling– names including Cruz, Gregoire, Kevin, Valentin, Roman– adorns the outer rooms of the space. In these one can find what are ostensibly figurative depictions of the titled persons, made through the playful piecing together of scrapped art materials. The choice of medium and the memorializing of individuals speak again to the refreshing sensitivity of the artist, of his affection for what could perhaps be described as his own pastiche of confidants, and of his genuine engrossment with the subtleties of the human personality. 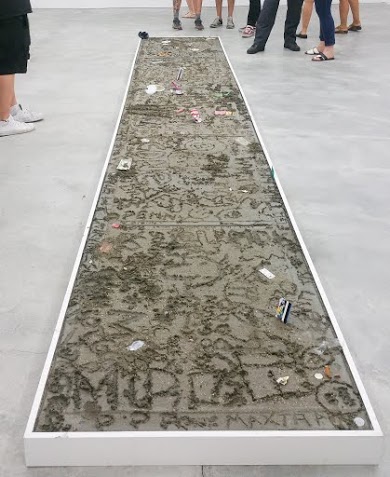 No piece, however, more forcefully validates the artist’s concept than the title work, a rectangular encasement of once-wet cement wherein the opening’s attendees inscribed the marks of their own presence. These visitors, acutely aware of their urge to catalogue their attendance, became living proof of the affinity of humans to join together in the contending of impermanence.

The collection of works which together form the ever-insightful Landmark, can be seen at 3 Howard Street through August 14.

This entry was posted on Wednesday, August 12th, 2015 at 3:44 pm and is filed under Art News, Featured Post, Show. You can follow any responses to this entry through the RSS 2.0 feed. You can leave a response, or trackback from your own site.