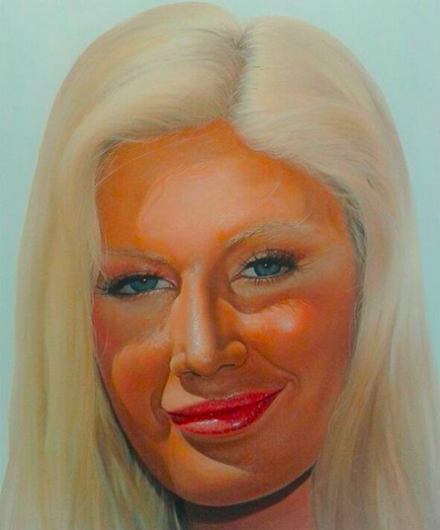 In our daily lives, we are constantly bombarded with imagery, navigating through the chaos of web pages, textbooks, etc. These images are being infinitely reproduced and distributed, passing through our perceptual filters to either be kept indefinitely or to be ignored entirely. This summer, Miami-born artist Chason Matthams works with Thierry Goldberg to put on his first New York solo show, Advances, None Miraculous, delving further into the chaos to create non-linear narratives from this image detritus, making comparisons that might otherwise be ignored. 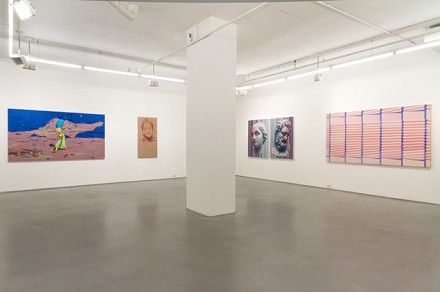 Matthams constructs these narratives by appropriating or alluding to various tropes and figures of historical and pop cultural imagery.  He finds most of his images online, a relatively open aesthetic space where he encounters his subjects out of context, with no discrimination between time periods, artistic style, or elevated notions of the creator as artist, designer, etc. 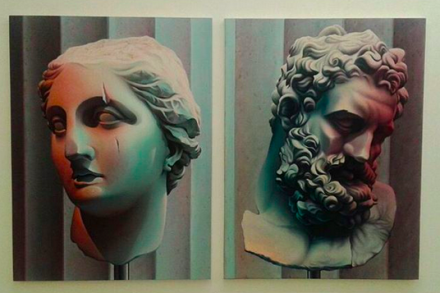 Chason Matthams, Athena and Zeus (Both 2015), via Art Observed

In this exhibition, comprised of Matthams’s large-scale paintings, we can see his exploration of storytelling as he takes cues from collage and photo manipulation, perhaps best represented in his piece Donald Duck and Leonardo Da Vinci’s Flower Study, in which he places the images side by side, floating in the negative space within the frame. Encouraging the viewer to see the similarities between the gentle curves of Da Vinci’s flower stems, and the contours of Donald Duck’s body as it is frozen mid-fall in a wooded area, Matthams makes subtle ties between the craft of illustration and depiction, tying various contextually rooted images to shared formal elements. 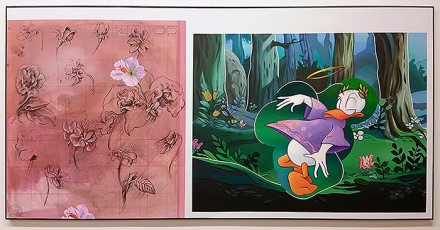 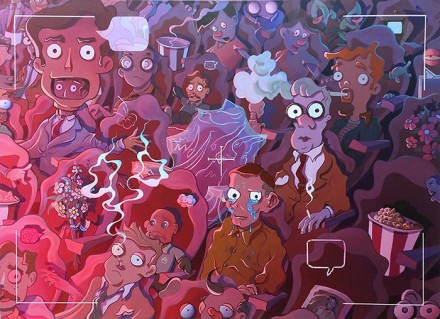 Playfulness and discontent go hand in hand in Mattham’s works, as he experiments with various vantage points, as in pieces like An Uninvited Audience (The Peanut Gallery).  In this painting, various cartoon characters are seated in a theater being watched through a camera lens. While we can assume the characters were previously focused on the performance, they are now looking towards the camera, confronting the viewer and making them part of the narration.  The question becomes, rather, which audience Matthams refers to, either the figures on canvas, or the viewers themselves. 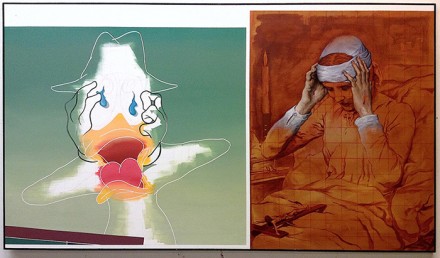 Matthams suggests that his viewers look at the paintings as a way of making peace with the chaos they often face when it comes to the consumption of imagery, hoping that those who come with an anxious mind leave feeling less overwhelmed by the endless intake of images placed into a certain harmony here. He states in his artist’s statement: “what I hope comes across is not just how convoluted the construction of the narrative and the links between the paintings are but also how fruitful their construction can be. I hope that the commitment to the continuous deconstruction and reconstruction of the illusion lends itself to a less anxious present.”

Mattham’s exhibition can be viewed at Thierry Goldberg gallery through September 13. 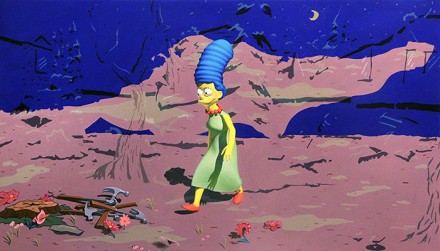 Chason Matthams, When I survey the glorious cross, Feblar’s 3D Marge Simpson with “Jeff and some Aliens” background (2015), via Thierry Goldberg

This entry was posted on Wednesday, September 2nd, 2015 at 12:00 am and is filed under Art News, Featured Post, Show. You can follow any responses to this entry through the RSS 2.0 feed. You can leave a response, or trackback from your own site.