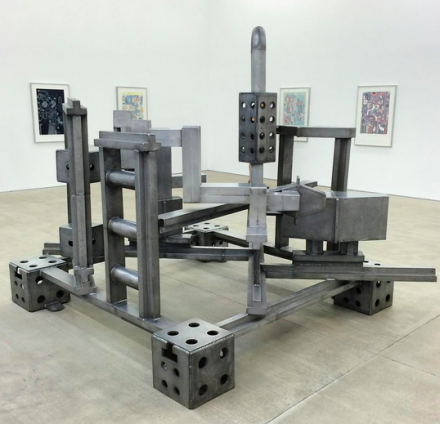 Eduardo Paolozzi’s contributions to the landscape of British pop, post-war sculpture and contemporary collage practices would make a fitting argument for qualifying him as one of the 20th Century’s great underestimated artists.  A founder of the International Group alongside Richard Hamilton, Paolozzi’s work mined the intersections of industrial materiality and mass media iconography, combining a populist focus with a coy perspective on post-war Britain. 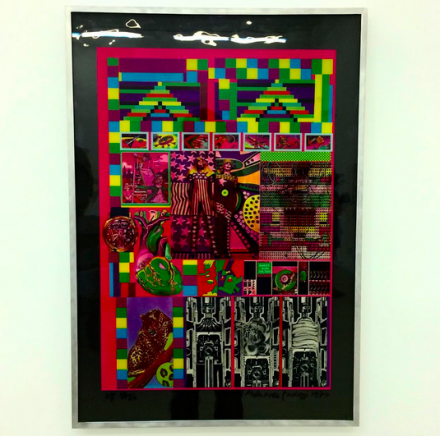 Considering his impact and work, it feels like something of a coup that Clearing Gallery would manage to land the small but impressively deep historical show of the artist’s work that opened last week.  Including a set of sculptures and prints, the exhibition is a striking entry in the early fall season, one that commands attention as much for the artist’s work as for the curatorial work done here. 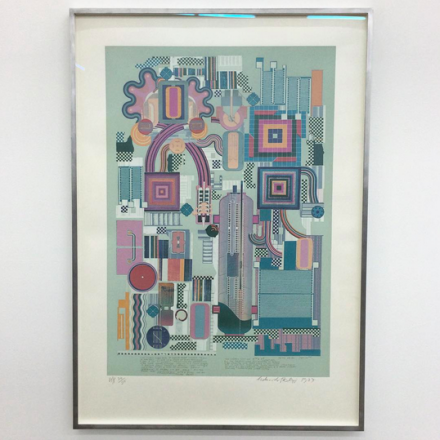 Keeping the show to just two rooms in the gallery’s spacious Bushwick location, Horizon of Expectations offers a diverse mix, anchored by Paolozzi’s jungle gym sculptures, intended to be installed at the Habitat shop in Wallingford for children to play on.  These works, with their jagged edges and haphazard construction, carry a somewhat familiar note in their peculiar forms, as if the objects Paolozzi pulled from (as in his prints), had been stuck directly to the canvas. 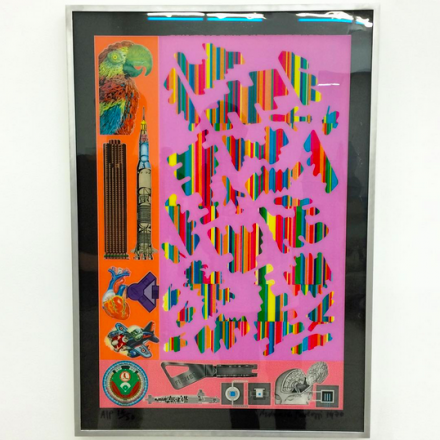 But it’s Paolozzi’s screen-prints that steal the show here, great flourishes of shade and form that combine the avant-garde linear investigations of Kandinsky with his own uniquely developed style.  The works are dizzying and vivid in their execution, and command the viewer with a masterful use of space.  In some, he layers line upon line, rendering great swirls and whorls of color that gives pause when considering their meticulously layered execution.  In other works, like Human Fate and World Power, the focus is turned outwards, pulling from print magazines and advertisements.

Throughout, a sense of constructivist aspiration seems to simmer beneath the surface, as if he intended his work towards a certain realization of communal space, image or time.  Loading his work with the immediately familiar, arranged in charged assemblages of implied violence, fear or enthusiasm, and turning these icons towards useful glyphs or tactile objects, Paolozzi’s work underscores his early role in the transition of Surrealist and Dadaist impulses from the early 20th century to the fertile soil of the post-war era. 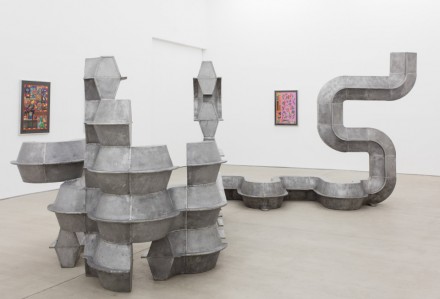 This entry was posted on Wednesday, September 16th, 2015 at 12:15 am and is filed under Art News. You can follow any responses to this entry through the RSS 2.0 feed. You can leave a response, or trackback from your own site.