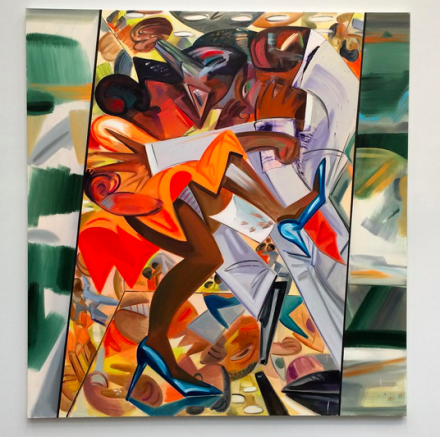 Dana Schutz, Fight in an Elevator (2015), via Art Observed

Currently on view at Petzel Gallery is a series of new works by artist Dana Schutz, the New York-based painter whose fluid hand, surreal scenarios and meticulous commitment to polymorphous narratives have made her a leading voice among U.S. painters. 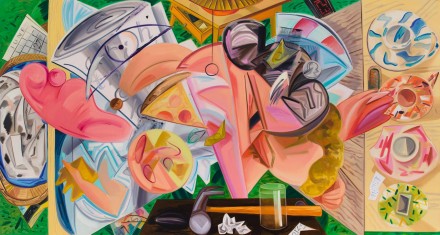 Schutz has often pushed a tinge of the comedic in her work, combining warped human figures with often strange, emotive or dissonant arrangements of space that underscore the conflicted emotions and states of humanity.  For her new exhibition, Schutz turns that eye for the absurd towards the medium itself, subtly lampooning historical discourses with a set of hyper-compressed, loaded new compositions. 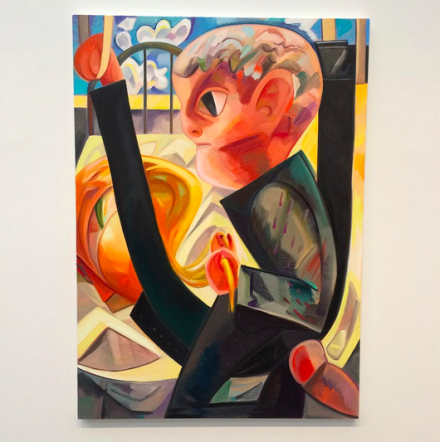 Titled Fight in an Elevator, the exhibition presents a set of new paintings that are packed into the confines of the canvas.  Characters and figures push out towards the stretchers, or twist their bodies to fit themselves within their spatial bounds.  In one of the show’s largest works, Shaking Out the Bed, her figures quite literally explode out from the center of the work in a sexual flurry, still held within the picture plane by bars of color denoting the end of the bed on both sides (with one side comically adorned with donuts).  This sense of space is always foregrounded, yet as in the aforementioned, are often twisted through Schutz’s often comedic sense of timing and selection.  That such a vivid sex scene would be complemented by so much food warrants a strong reaction, tempered by the flowing use of line and color on view here. 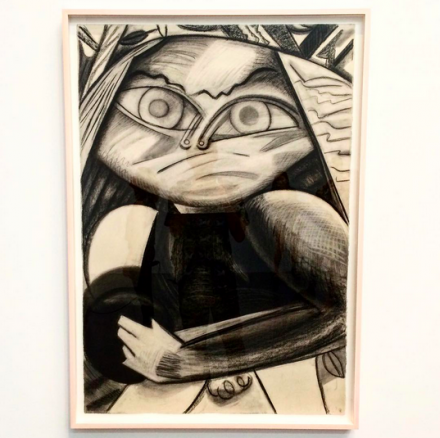 Dana Schutz, Fight in an Elevator (Installation View), via Petzel

Considering ongoing discussions about the limits and conclusions of painting in modern practice, Schutz’s work seems to take a certain linguistic twist on this debate, almost using the hard edges of her work to present both figures and full scenarios trapped within their bounds as painterly material.  Responding to assumed conclusions and structures of painting’s history, Schutz’s brand of irreverence towards these critiques reaches an immensely entertaining and commanding end result.  As the titular work shows, Schutz seems to enjoy pushing those geometric limits to even more aggressive ends, cramming several figures into a space that seems to be rapidly closing off.  Despite the implied depth of the elevator, Schutz’s play on the flat plane of the image carries with it a real anxiety of closed space, showing her figures blurring into each other as the doors shut. 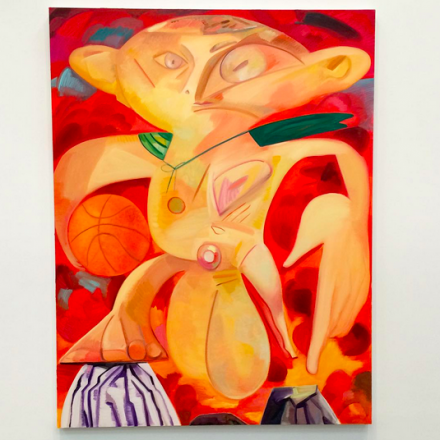 Much in the same way that the artist’s plays on the edges of her work, this removal of depth from the work places her figures into a comical relation, forced to share a space they couldn’t possibly occupy in reality.  As a result, bodies break down, doubling down on the spatial flux that the artist seems so interested in here, and show that despite the high-minded concepts at play here, Schutz clearly still enjoys a good visual joke. 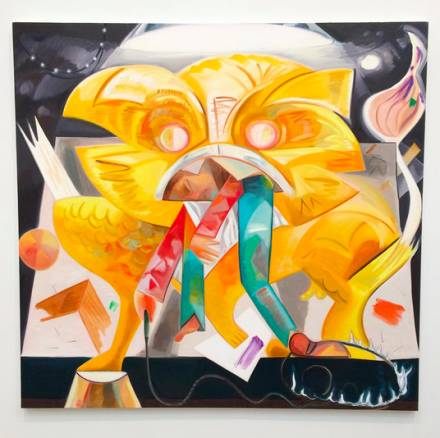 This entry was posted on Friday, October 9th, 2015 at 12:00 am and is filed under Art News, Featured Post, Show. You can follow any responses to this entry through the RSS 2.0 feed. You can leave a response, or trackback from your own site.