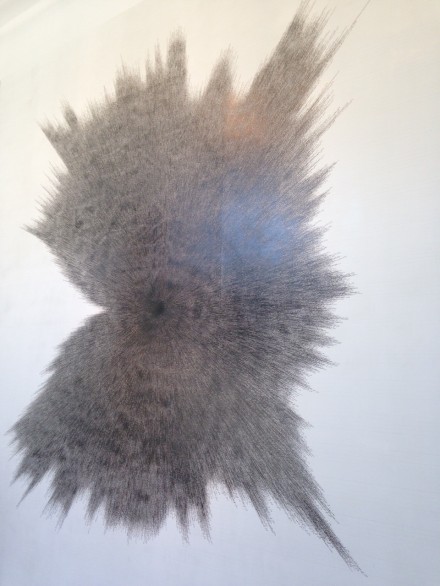 Artist Idris Khan is presenting his exhibition, titled Overture, in New York this month, marking his first show in the city since 2010, and his first show with Sean Kelly, adorning the gallery’s two floors with intricate and spectral works stemming from his interdisciplinary approach.  Known for a meticulous aesthetic that draws inspiration from both Eastern and Western cultures, Khan executes a mosaic of various histories, narratives and disciplines in his expansive practice, while primarily leaning towards his work in digital photography. 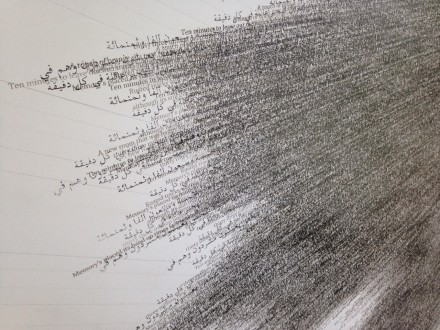 The main focus of the exhibition is Displacement, a large-scale, site-specific assembly of stamp prints that Khan manually applied onto the wall.  Calling to mind an atomic explosion or a terrestrial formation, this impressive structure repeats itself throughout the exhibition, applied on glass panels or gesso, and delivering a variant constellation each time.  In one section, the panels are strung up along a metal framework, giving an illusory, textured substance to the flat panels. 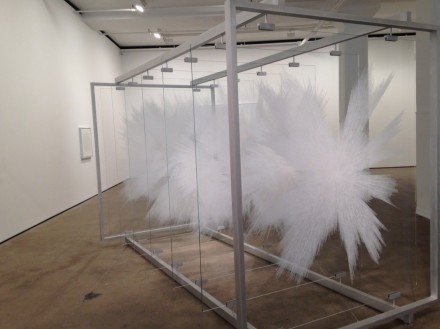 Requiring viewers’ close inspection to reveal their details, Khan’s elaborate creations are composed of texts – both in English and Arabic – penned by the artist himself.  Widely positioned around edges, lines of text intensify through the center, evolving into profound shapes and clusters of phrases, before gaining a distinctly transcendent charm as the texts become gradually illegible. 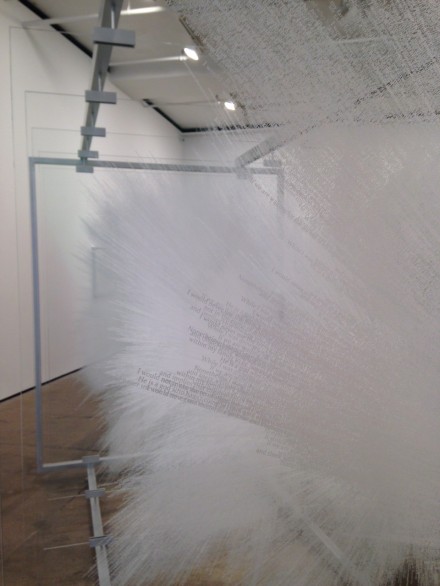 Born into a Muslim father and a mother who later converted to Islam in London (where he still lives and works), Khan has alway employed Islamic motifs in his oeuvre, most famously in his-text based works, including a piece in which he photographed every page of Quran to digitally pile them into an abstract form.  Here, the Royal College of Art graduate unifies two cultures that have had significant influence on his creativity through the anchor of language.  Dictated as two opposite views, Khan’s counterposed Eastern and Western ideologies blend into a chaotic yet fluid  assemblage.  The namesake of the exhibition, Overture, furthers Khan’s statement on fluidity, blending his layers of text into an ambitious three-dimensional form that offers a different view from every angle, questioning the possibility of a singular or confined world view.

Idris Khan: Overture is on view at Sean Kelly through October 24, 2015. 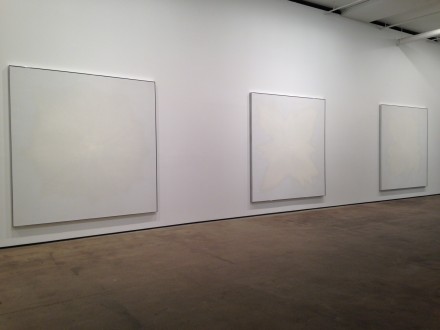 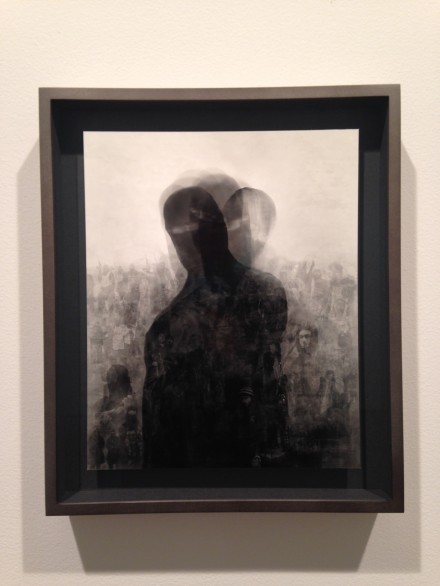 This entry was posted on Friday, October 23rd, 2015 at 12:00 am and is filed under Art News, Featured Post, Show. You can follow any responses to this entry through the RSS 2.0 feed. You can leave a response, or trackback from your own site.