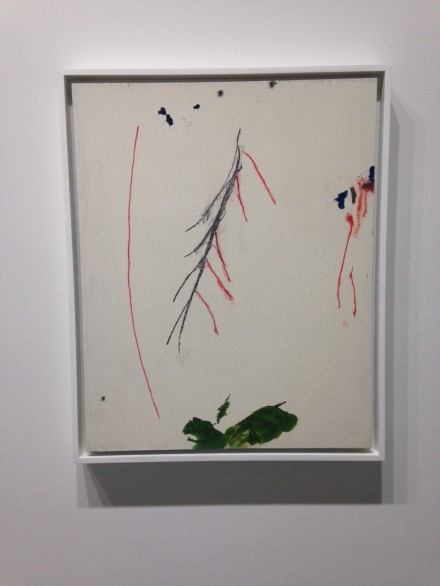 Josh Smith, Untitled (2014), all photos via Osman Can Yerebakan for Art Observed

Luhring Augustine is currently hosting its sixth collaboration with New York based artist Josh Smith. Having emerged in the early 2000s alongside a group of critically challenging and occasionally irreverent artists including Kelley Walker, Sterling Ruby and Seth Price, Smith is one of the foremost representatives of a genre that delivers spontaneity and audaciousness in presence, yet asserts a depth that is subliminal and immaculate.  Here, the artist takes his signature penchant for deconstruction to one of many natural conclusions, executing minimal compositions that tie his interest in gesture and hand to an almost free-associative exchange with the art historical. 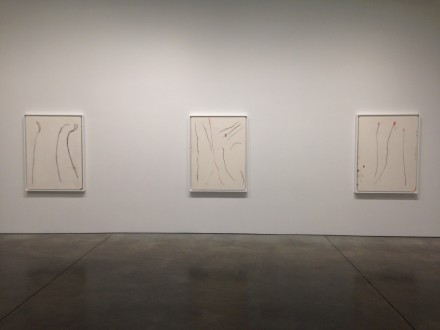 Primarily a painter of abstracted, complex forms and color compositions, Smith has ambitiously scrutinized other mediums, investigating alternative expressions in sculpture, collage and printmaking, yet almost always putting them in conversation with his work as a painter. Widely recognized for his works in which he repetitiously uses his own name, Smith complicates notions of authorship, artistry and even the art market itself. Often noticeable and sometimes illegible, Smith’s name confronts viewers with this daring attempt in an era that is governed by the phenomenon of ‘art star’. 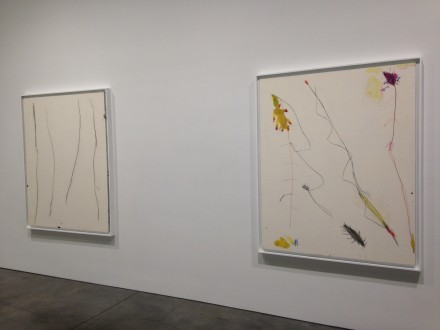 The Tennessee native has been expressing a practice that constantly fluctuates and changes its façade over the years, stretching the narrative of his oeuvre with every new series in resistance to any given classification. Smith’s current exhibition announces the next step for his constant exploration of an alternative visual language, especially for his association with the blank surface as a base for his concept.  Smith’s tempestuous gestures and voluminous forms here are substitute for modest structures, thin lines and gentle curves that create wispy inflections on the canvas surface. 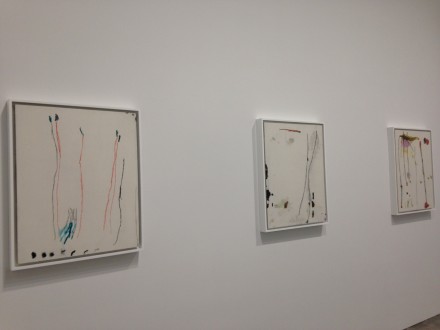 Noticeably stripped down compared to his previous repertoire, these mixed media collages, consisting of twenty-one untitled pieces, gradually unfurl a loose visual narrative, bringing up references to the 20th Century avant-garde’s interest in vernacular art forms, as well as sudden comparisons to the work of artist like Miró.  Primitivism could be a fitting attribute to Smith’s current works, but their coy knowledge of painting’s last century seems to hold them back from a base attempt at reduction.  Serene, yet complex abstract figures orchestrate motley and subliminal compositions that claims another territory in Smith’s expansive oeuvre, always boasting a slight sense of both humor and aesthetic balance.

Josh Smith: Sculpture is on view at Luhring Augustine through October 31, 2015. 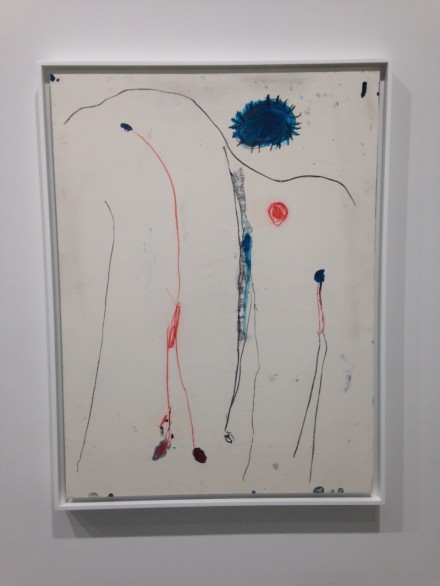 This entry was posted on Friday, October 30th, 2015 at 12:00 am and is filed under Art News, Featured Post, Show. You can follow any responses to this entry through the RSS 2.0 feed. You can leave a response, or trackback from your own site.