London – Liam Gillick: “The Thought Style Meets the Thought Collective” Is On View at Maureen Paley Through November 22nd, 2015 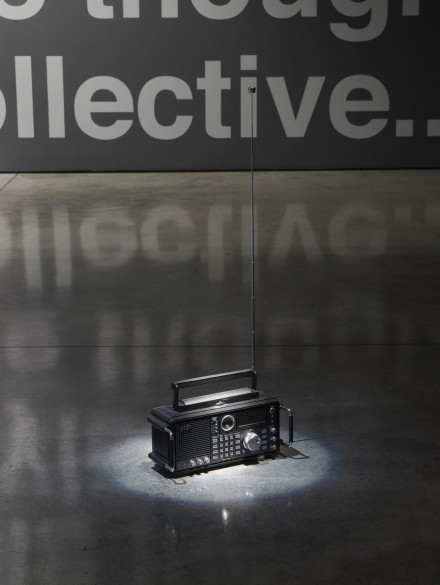 On view at Maureen Paley through November 22nd is a solo exhibition by prominent British conceptualist Liam Gillick, continuing the artist’s vastly interdisciplinary practice mining fluid and interconnected social norms, and scrutinizing the overt or arcane methods that agents of society pursue in response to such dynamics. 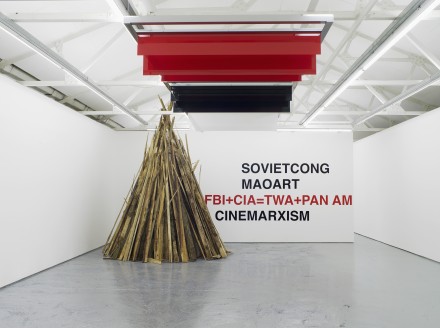 A preeminent figure in the development of Relational Aesthetics, Gillick was included in 1996’s influential exhibition Traffic, curated by Nicolas Bourriaud.  Gillick, in his current exhibition, incorporates his earlier works from the 1990’s with more recent pieces, delivering what he does best: orchestrating a united visitor experience in which works gain momentum through interaction.  The pieces on view are often pulled from decades ago, yet share distinct qualities of being created in a collective action, tying to Gillick’s current inspirationL anthropologist Mary Douglas’ interpretations of Ludwik Fleck, who is quoted on the press release via an excerpt. “Thinking is a collective activity” says Fleck, cementing Gillick’s premise for his equally conceptual and engaging exhibition. 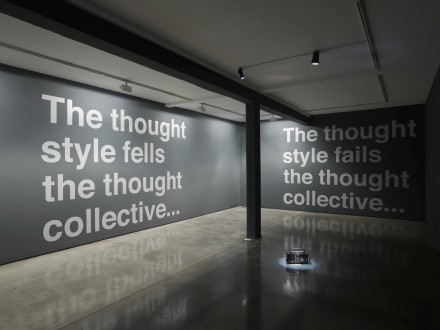 Studying modes of autonomy and self-realization within borders of collective thinking or acting, the New York-based artist articulates direct or indirect consequences of concerted operation on the individual self, and the individual’s distinct agency as regards the body politic.  Applicable to political, social or religious sects, this act of communal action and its divergent aftermath (or vice versa), sets the basis for Gillick’s visually staid, yet ideologically challenging exhibition. 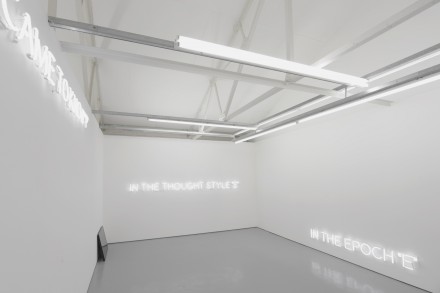 A broadcast from 1887 on the Subject of our Time, for example is a piece from 1996, employing a vintage radio broadcasting a text about radio broadcasting from a book written by Edward Bellamy in 1887, before this technology was invented.  Next to such audial stimulation, Gillick introduces a text-based body of new works, adopting the striking allure of neon as linguistic element, pushing twists in language and perception alongside the droning radio work.  Abstract textual inversions such as “IN THE THOUGHT STYLE ‘S’” or “IN THE EPOCH ‘E’” shine on gallery walls as a part of a new series that is appropriately titled Discussion Platforms.  The works make much of their attempts to define spaces and containers for thought, as if a concrete, almost numeral application to language could create new spaces for perception or revolution.  Either way, Gillick’s point towards this thought is perhaps enough to actualize it.

Liam Gillick: The Thought Style Meets the Thought Collective is on view at Maureen Paley through November 22, 2015. 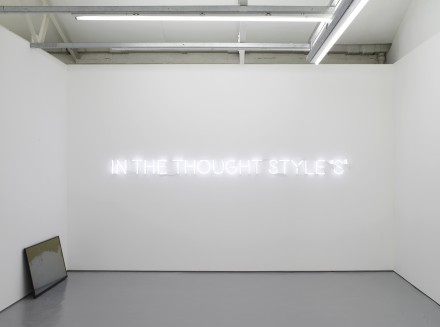 This entry was posted on Sunday, November 1st, 2015 at 12:00 am and is filed under Art News, Featured Post, Show. You can follow any responses to this entry through the RSS 2.0 feed. You can leave a response, or trackback from your own site.