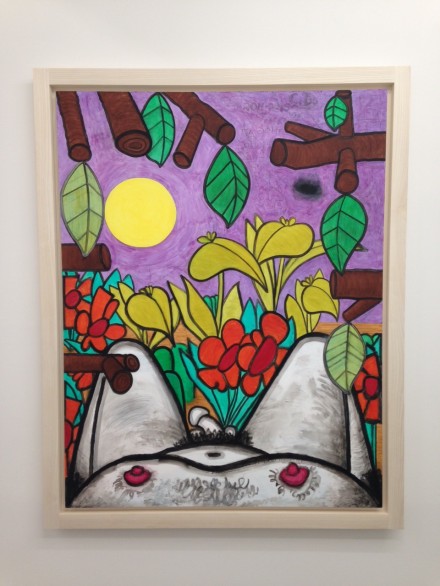 A new body of work by painter Carroll Dunham is currently on view at Gladstone Gallery, resuming the artist’s ongoing investigation of the bather motif, which he has pursued, modified and continued to explore since 2009.   The large scale paintings on view depict lavish nude figures positioned amidst phantasmagorical landscapes, loyal to Dunham’s exuberant signature painting style. The artist’s work here does little to depart from his familiar forms and techniques throughout the series, and instead focuses on delivering his particular set of arresting images with a degree of uncompromising consistency.  Even so, some fresh elements in these works, such as male nudes and animals join the spectrum. 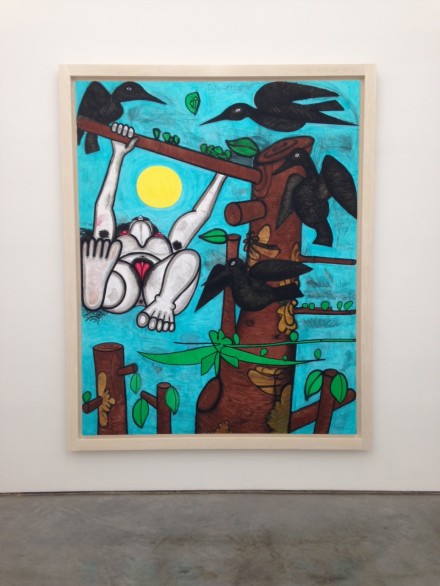 The nature of Dunham’s subject matter ties vivid references to the 19th century painters including Cézanne, Matisse and particularly to Gauguin, whose geometrical and controversially primitive depictions of nude female bathers in exotic pastoral landscapes stand as a common thread for the New York and Connecticut based artist. Dunham, however, coming from an era of painters who revived this fading tradition by employing deconstruction as a tool, scrutinizes tradition and technique. 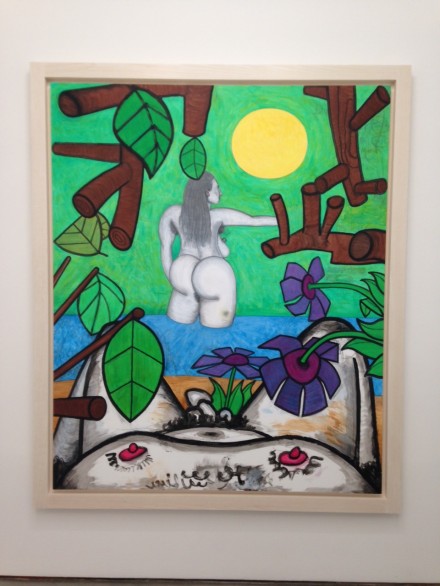 Throughout the exhibition, overtly curvaceous and abnormally scaled nudes pose in fluid, vivid conversations with their surroundings, candidly contorting their bodies into surreal positions, often complicating the long historical tradition of bather paintings.  Boldly exposed and zealously exaggerated, each bather’s bodies claim the viewers’ attention.  Yet Dunham here seems to be equally invested in accentuating the narrative force of his landscape depictions.  Responding to the colorful forms and full depictions of the nude human form, bulky trees spring forth from the soil with their chunky branches, and poke Dunham’s bathers, contributing to bizarre visual narratives in each painting. 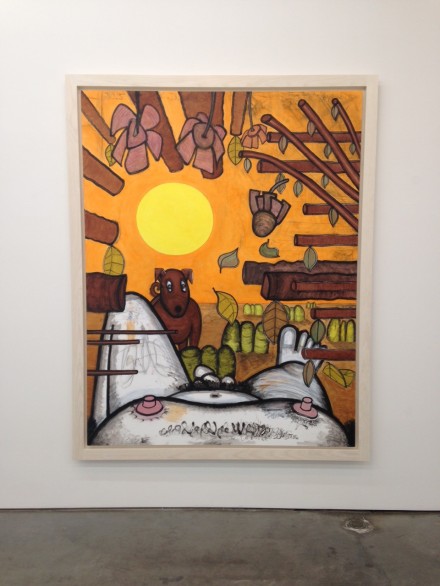 Far from idolized or eroticized nude forms, placed in reserved corners of nature, Dunham inclines towards a blending of genres and styles, among which are comics, Pop Art, Abstraction and the Neo-Primitivism of 1980’s New York that his work in part emerged from. His steadfast adherence to such a blend of styles in his paintings over the years has challenged viewers to read his arguments behind such baroque paintings.  Dunham once again reassures that he is not after such sharp translation of his work, promising on the other hand buoyant and profound virtuosity in painting through vivid forms and explosive contrasts of color and line.

Carroll Dunham is on view at Gladstone Gallery through December 4, 2015. 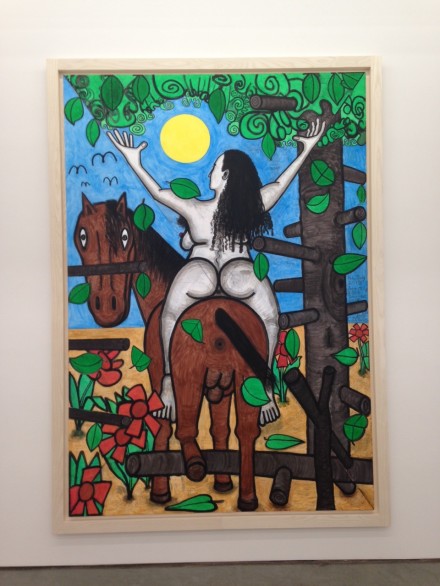 This entry was posted on Sunday, November 29th, 2015 at 9:37 pm and is filed under Show. You can follow any responses to this entry through the RSS 2.0 feed. You can leave a response, or trackback from your own site.