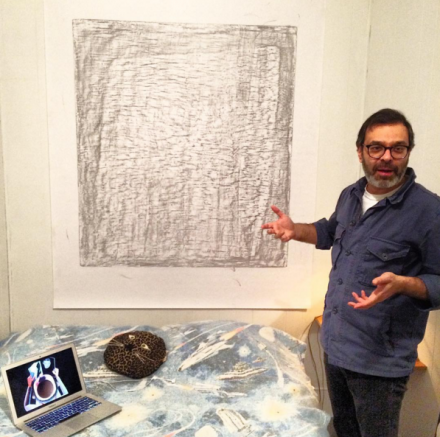 Asad Raza with work by Jordan Wolfson, Jessica Dickinson and bedsheets from his childhood selected by Rachel Rose, via Art Observed

“Hey, I’m Asad,”  Asad Raza greets the viewer at the ground floor of his apartment building on Spring Street, before leading them up the stairs to his modest one-bedroom.  Over the past month, Raza has brought a number of visitors through the space for Home Show, a group exhibition of site-specific and performative works that he compiled from a close group of friends, including Tino Seghal, Camille Henrot, Rachel Rose and many more, guiding them through the show with an enthusiastic flair that intertwines his own personal history and life with the work of his friends and collaborators. 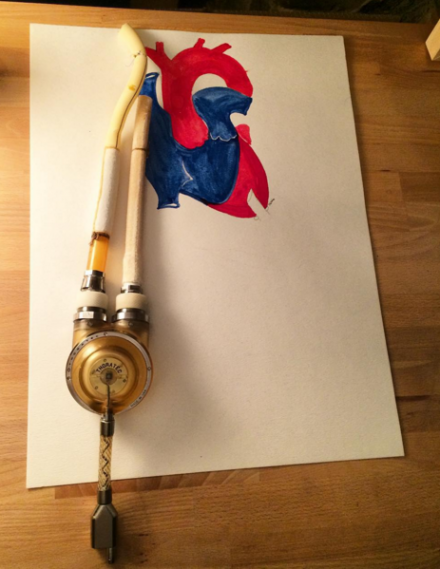 A heart pump loaned to the artist from his father, via Art Observed

Raza’s personal Wunderkammer, as it’s shown here, is a thoughtful mix of elements, allowing the respective works of his friends and collaborators to mingle with artifacts and fragments of history.  Seeing the works collected here is a striking mix of curatorial focus, countered by his active, performative narration. Raza’s choices draw connections through personal friendships, family histories, and an extended interest in the mechanisms of time and space, with his own memories and personal effects offering the grist for the show.  In his kitchen, a series of garbage bags sit near the door, full of items “edited out” of his life by Rachel Rose, ready for disposal.  Above a door frame, he is showing a series of drawings in graphite and ink by Philippe Parreno, created by the intersection of a homemade computer virus and the artist’s own drawings of a moth.  Henrot’s work is nearby, an Ikebana flower arrangement that the artist himself must maintain through a series of specific actions and intentions.  On another shelf, a miniature painting by Jo Sanders intermingles with a scent created by his sister, the perfume designer behind Régime des Fleurs, who created a scent meant to invoke the artist’s childhood in Buffalo, NY, while below these pieces Raza has shown a a series of objects, including a heart pump given to him by his surgeon father, and a form letter sent from Shah Jahan (who built the Taj Mahal) to his family in the 17th Century.  Nearby, the shelf holding the artist’s phone and wi-fi router also holds a series of stones taken from the Athenian acropolis, a continuum of the technological and temporal that roots the exhibition in both an immediate sense of domesticity and the extended arc of human achievement.

At one point during the tour, Raza stops, bends over, and while turning and grunts “What do you think this is about?”.  He then explains that the work is the creation of Tino Seghal, before asking the question again: “What do you think this is about now?”  The sudden pause for reflection, albeit notably forced and framed by his explanation, brings the show into a sudden focus, before the tension dissipates and Raza amiably continues the tour. 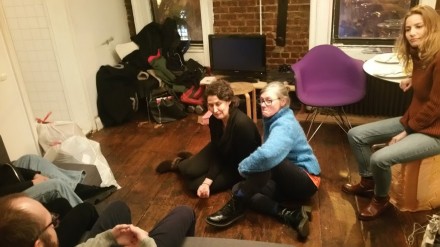 A performance work in the living room of the space, via Art Observed

In the bathroom, Raza shows off a series of engineered toothpastes designed by Carsten Höller, which the artist has created with the intent of inspiring specially curated types of dreams, and which he has asked Raza to use each night before he goes to bed.  “I have had a few very vivid dreams since using it,” Raza says, “and Carsten is pretty interested in hearing about them, I’m not sure he expected it to work.”  Nearby is his bathtub, clogged up with a massive wad of hair cut from the head of artist Sophia Al Maria – “It’s part of a ritual she’s asked me to do everyday,” he says, noting that each day he must write down his desires for his day, and place the note in the drain, covering it again with the hair, which he soaks in soymilk. 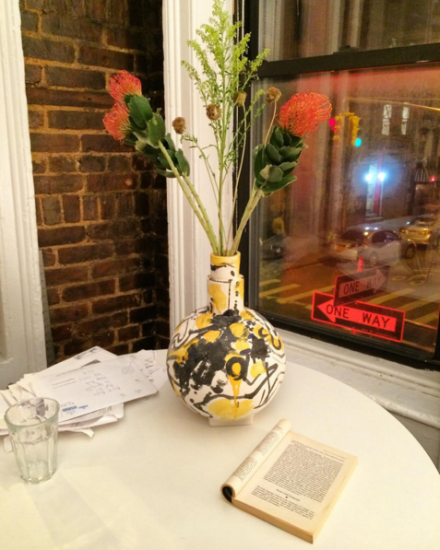 An Ikebana arrangement by Camille Henrot, via Art Observed

Walking into the kitchen, Raza pauses to open the freezer door, displaying an arranged still-life by Adrián Villar Rojas of frozen material, including lobsters, pomegranates, and frozen bottles of Corona, which have ruptured and spilled material across the interior of the freezer.  The sudden shock of seeing the work preserved in the freezer, waiting for its viewers is immediate, and compounded by the lush, ripened surfaces of the fruits and vegetables, and their cautious arrangement, as well as their framing by the refrigerator door.  “It’s like a Dutch nature morte,” he says, “but real.”

A cynical view of this show may be that there are very many collectors with art in their homes, what might make a tour of it so special?  This would ignore that fact that the art is almost entirely in this case site-specific to the apartment and involves in many cases performative ritual and artist interaction.  This situation is remarkable further in that the collection of artists consists of globally recognized names, as well as very strong up and comers within the art world.  Finally, that the home is a relatively modest one bedroom walkup, albeit a well located one, stands as a testament to the achievement of collecting so much into such a place.  There is a sense of excitement in the show that perhaps new ground is being gained against what seems to be a crisis of economics in the art world, one in which there seems to be an endless loop of gallery displacement due to high rents, and confusion as to what happens next for the methods of showing art.  Perhaps this new form of engagement between artist and viewer establishes a new plane of exhibition, one that is also delightfully analogue.

From a curatorial perspective, it is partially the intrusion in on the host’s life that makes the show so compelling.  While Home Show is as much a connection of his friends and their shared aesthetic interests, it’s also a trace of their own tangible presence in his personal habitat, moving things around, forcing accommodation of their own pieces, and changing how Raza experiences his own home.  One gets an immediate sense of deep human engagements with time, particularly in terms of human history and creativity through artistic turns on archaeology and anthropology in each of the artist’s works, but can also distinctly sense these threads as they run through Raza’s own life and work.  His life, even in the deepest, most personal moments, is reflected in his family’s own history, and those his fellow artists introduce into the space of his home.  At this point, as viewers begin to slip out of his home, Raza pulls out a large binder of photos from the archive of Dan Graham, a magnificent selection of original photos that comprised and informed much of Graham’s work over the years.  This introduction of an archive outside himself, outside of Raza’s personal history, is a fitting conclusion.  As the viewer flips through the collection of photos, showing subdued landscapes and enigmatic American architectures, then passes out into the streets of downtown Manhattan, the palimpsestic, interlocked histories of New York City, and its millions of residents, are once again writ large on one’s awareness. 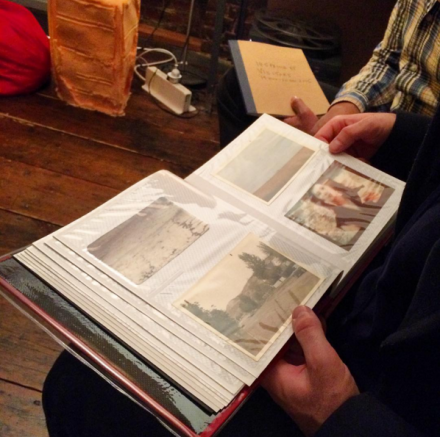 This entry was posted on Saturday, December 26th, 2015 at 12:00 am and is filed under Art News, Featured Post, Show. You can follow any responses to this entry through the RSS 2.0 feed. You can leave a response, or trackback from your own site.