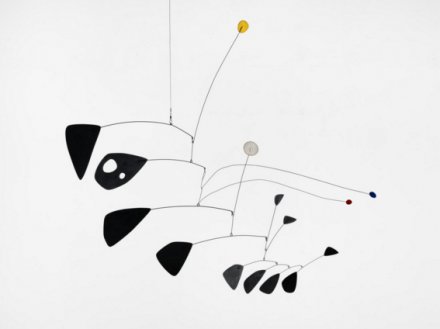 Alexander Calder’s work as the originator of the mobile, and his free-flowing, languid techniques have long established him as a distinct pioneer of mid-20th Century sculpture.  His floating, kinetic sculptures and more grounded, static works were iconic elements of the post-war movements towards the abstract and expressive in sculptural practice.  Yet presentations and explorations of Calder’s work frequently obscure his early interest in the theatrical and performative, threads which were long instrumental to the artist’s practice, and to the development of much of his later work.  It’s these same threads that receive express emphasis in the Tate Modern’s Performing Sculpture, an exhibition of work culled from the length of Calder’s career, and which places his interests in performance, movement and time back into the proper context his later sculpture is so strongly rooted in. 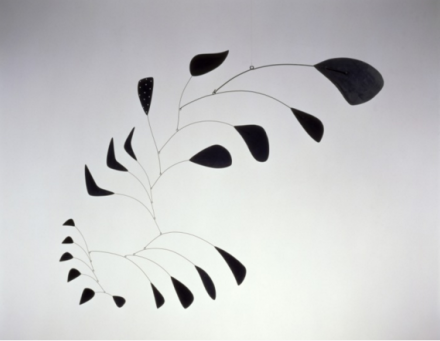 Spending his early years in Paris, Calder’s early work was particularly interested in movement and performance.  Of particular note is Cirque Calder, the artist’s early sculptural composition compiled from a group of small figurines resembling toys, which he would use to perform energetic routines and playful skits.  Fascinated with the circus’s serpentine movements and clockwork precision, the artist’s work in this series of pieces sought to recreate the dualities of mechanical and physical motion that the performers exhibited, flying over the heads of the audience and tumbling across the circus rings as if part of a flowing, synchronized whole.  Calder’s works do, in fact, appear as tiny machines, dynamic pieces that perform roles placed somewhere between an approximation of human motion, and an explicitly mechanical balance. 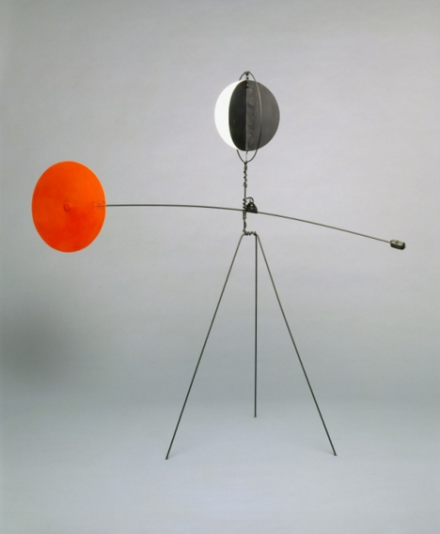 These works are juxtaposed with other pieces that draw both on threads of traditional sculpture, the avant-garde tenor of the city in the 1920’s and 30’s, and even painterly notions of fellow pioneers Joan Miró and Piet Mondrian.  His slight inflections of steel and snaking wire turn the balance and movement of his earlier pieces towards a more gentle, composed final product, one which, rather than taking direct cues from a user, instead are placed into the environment, interacting with slight movements of air nearby bodies to create shifting, illusory effects.

The exhibition also includes a series of Calder’s motorized pieces, which apply a distinct industrial force to the artist’s work.  Driven by the gentle hum of small motors, the pieces execute similar processes seen in his more iconic mobiles, yet are also more susceptible to error, occasionally breaking down or requiring maintenance, key factors in the artist’s gradual abandonment of these works. 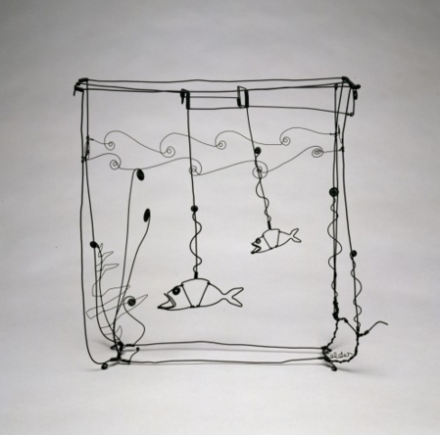 The implications of the show, particularly these lesser known motorized works, are fascinating in the context of Calder’s broader career, tracing a view of the artist’s unique vision not merely as a development of kinetic and human factors, but as a gradual evolution of his vision by dint of mechanical experimentation.  Calder’s mobiles are as much a product of his interests in movement as they are an end result of trial and error.  Much in the way that his works drew from the environment around them to complete their circuitous paths, Calder’s work here is presented within the context of a range of fellow artists, industrial innovations and outside influences, drawing their energy and dynamism from the vibrant contexts of the progression of history.

The exhibition is on view through April 4th. 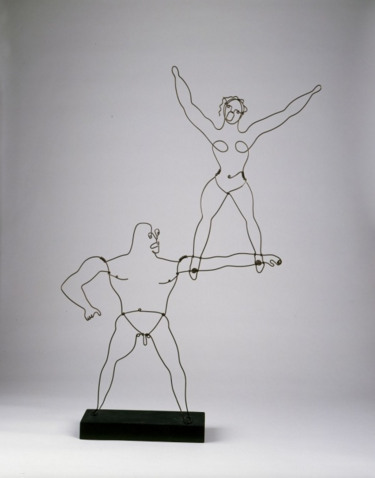 This entry was posted on Wednesday, January 27th, 2016 at 12:00 am and is filed under Art News, Featured Post, Show. You can follow any responses to this entry through the RSS 2.0 feed. You can leave a response, or trackback from your own site.