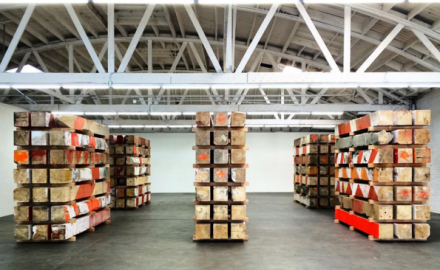 Venus Over Los Angeles has brought artist Marianne Vitale to exhibit in the West Coast for the first time this month, offering its ample exhibition spaces east of the river to the New York artist for a pair of monumental installations that continue her intuitive blend of simple sculptural gestures and massively-scaled material to open a space for reflection on force, structure and time. 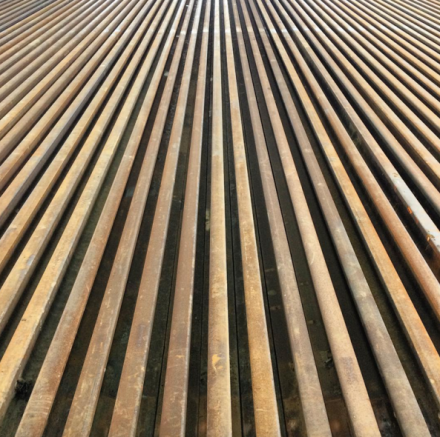 Vitale’s practice has long been predicated on a certain mixture of sculptural minimalism and raw industrial appropriation, pulling massive construction implements and pieces of urban infrastructure into neat, minimal arrangements, allowing the intersections of construction’s hard lines and right angles to mingle with the respective inflections, chips, scars and flecks of dirt or paint that have weathered the surface of each element of the piece. 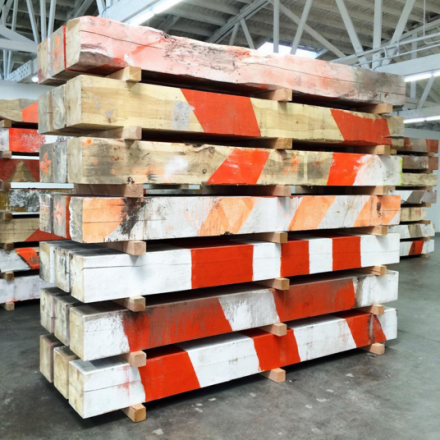 In one room, the artist’s Beam Work builds the safety orange and white striped beams into towering monoliths of difference, emphasizing the varying hands and slight variations in the painting techniques and marks made on each of each respective version. Calling to mind unused material and idle action, the work equally calls attention to their subtle arrangement of each set of striped beams as it does their divergent origins, realizing jagged patterns that hint at the artist’s intent and the equally dissonant relationships between each piece in turn. 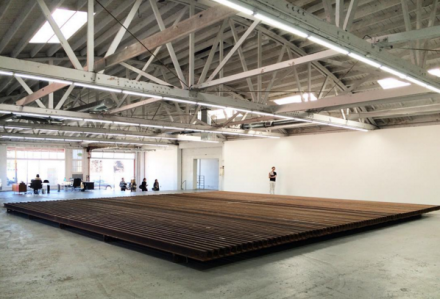 The other work on view, Thought Field, is a decidedly more subdued affair, arranging a mass of railway track side by side to realize a hypnotic plane of parallel lines, one which seems like a flat, unbroken plane or a set of undulating waves depending on the position of the viewer or the lighting in the space. These steel lines, removed from its mass transit context, are placed here into a point of complete stillness, drawing the viewer’s eyes towards a singular focal point, yet one that consistently draws the eye up and down its endless lines. It’s an interesting point, considering the stark minimalism of her work, to see Vitale render a piece that manages to create illusions of force and speed in such tangible degrees. Perhaps its this illusion of motion and energy that make her pieces so impressive, and their sense of temporary arrest that emphasize the deeply meditative nature of their final form.

Vitale’s exhibition is on view through February 27th. 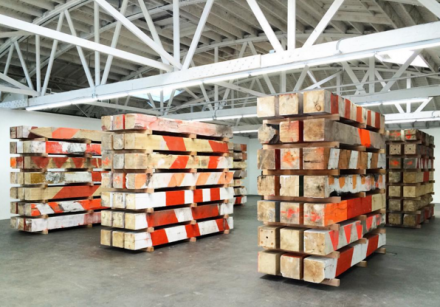 This entry was posted on Friday, January 29th, 2016 at 12:00 am and is filed under Art News, Featured Post, Show. You can follow any responses to this entry through the RSS 2.0 feed. You can leave a response, or trackback from your own site.