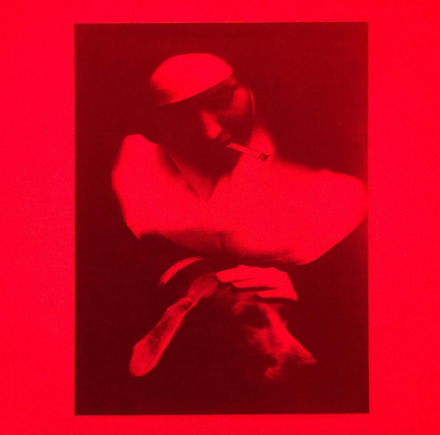 What does it mean to work? To what extent is play quantifiable as labor and vice versa? Such are the questions posed by Work Habits, the latest solo exhibition from artist Lizzi Bougatsos on view at James Fuentes.  Stepping into a space lit up in traffic light red on opening night, one quickly garners a Nietzschean sense of faith unfound, unraveling foundations and unsustained beliefs.  The room, minimally adorned with a dynamic installation of assemblages, depict these found and repurposed objects as inherently lazy. 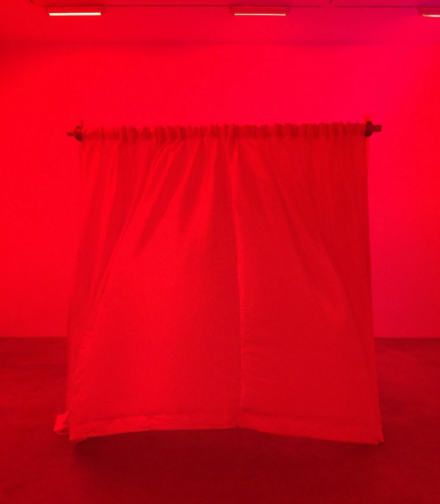 Lizzi Bougatsos, I Just Want to Be Wonderful (2016), via Rae Wang for Art Observed

In After The Pope Party (2016), for instance, a leather jacket lies crumpled over a theatre prop style wooden chair in, resting on a yoga mat, the forlorn foam of the seat leaning to one side, with the only life given to it coming through the gentle glow of a blue neon light.  In Window Dressing (2016), the steel and cement structure, a bondage set up with kinky crisscrossed leather strips jutting outward toward the viewer, creates a gesture more flaccid than fetishistic.  By contrast, I Just Want To Be Wonderful (2016), places a suspended, opaque fabric curtain into play with the use of an electric fan, murmuring and blowing the fabric back and forth.  There is nothing of mystery behind the curtain – only banality, countered by Bougatsos’s particular rawness and simplicity in the staging of her objects. 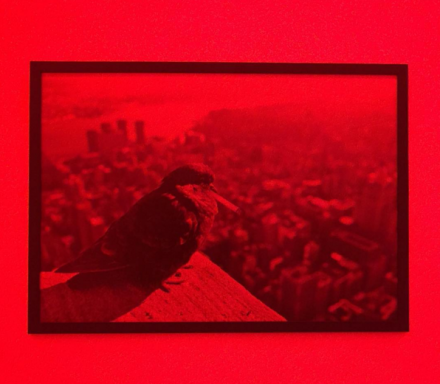 Two prints are hung amidst the installation, the first being The King’s Virgin (2015), showing a nun with cigarette, patting a dog maternally.  The work’s coy pun on “habit,” the cigarette emphasizes the habitual rituals and mechanisms of the daily grind, even among clergy.  Countering this piece is Working Class Bird (2016), a rather startled looking pigeon that could fly off the edge of the building at will, but instead pauses for a smoke break, locked in the same proletarian gesture. 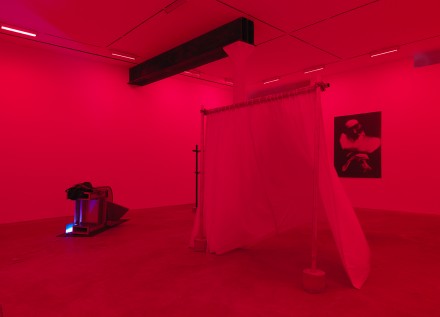 The title of the show also elucidates how creativity risks becoming merely another thing workers are compelled to do, and emphasize it as punishingly laborious as it is intuitive.  The division between work and play completely dissolves in a creative hub like New York, where many struggle to distinguish work life from non-work life.  While art does typically eschew the quantifiable in favor of the qualitative, here Bougatsos synthesizes work as both an externally-imposed necessity and a sense of freedom as a deflated desire.  As the art-world increasingly yields to upper class excess and commodification, making a living as an artist requires constant communal nourishment and self-belief in a disenfranchised society devoid of faith. 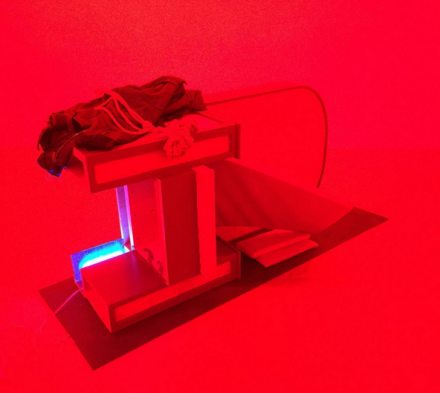 Lizzi Bougatsos, After the Pope Party (2016), via Rae Wang for Art Observed

Akin to fellow artist and musician friend Kim Gordon, Bougatsos toys with deconstruction and the notion of spiritual malaise, although Bougatsos is perhaps a little less pessimistic and a little closer to the performative frenzy and experimental euphoria that she presents on stage as a member of the band Gang Gang Dance.   There’s something innately joyful about Bougatsos’s work, making a show of its lethargy and effortlessness, while Bougatsos suggests there are still seeds of potential for anarchy and “playbor” through her actions.  Her lyrical press release begs even more questions, evoking our present collective human condition wavering between activism, extremism, fetishism, fundamentalism, nihilism, paganism, pragmatism, secularism and satanism, begging the question: does one require a bridge between pragmatic goals and hopeful ideals?

Work Habits is on view through January 31st. 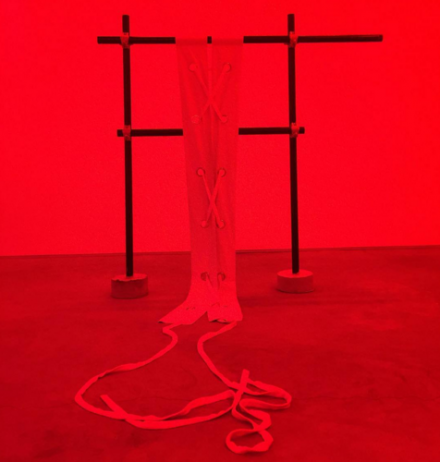 This entry was posted on Tuesday, January 26th, 2016 at 12:00 am and is filed under Art News, Featured Post, Show. You can follow any responses to this entry through the RSS 2.0 feed. You can leave a response, or trackback from your own site.